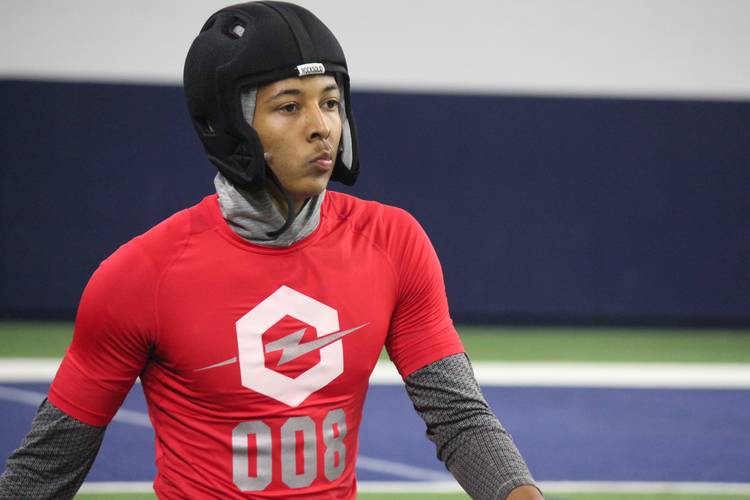 It was an impressive weekend for defensive back Jalen Kimber. The four-star cornerback from Mansfield Legacy visited Texas on Saturday, won the fastest man competition at The Opening regional on Sunday and picked up an offer from Oklahoma later that day. The highlight came when he posted a 4.43 laser-timed 40-yard dash. That’s an impressive time for a player standing 6-1.

“It was a surprise to be the fastest out there. When I compete, it’s a whole different level and I’m here to win,” Kimber said. “I’ve seen people ranked above me that I know I’m better than, so these types of camps give me an opportunity to prove that.”

Kimber is the No. 26-ranked player on the 2020 Fabulous 55. His national ranking isn’t as high with him checking in at No. 46 in the state, per the 247Sports composite rankings. That’ll change as his offers grow and he continues to showcase his athletic prowess.

He’d rather not worry about rankings or testing numbers. He’s on a search for a new home after his prep career and a trip to Texas on Saturday gave the Longhorns a real shot at landing him. Kimber wants to commit by the start of his senior season.

“(The) Texas visit was fun,” Kimber said. “They gave me a bunch of different scenarios of how I’d fit in the defense if I went there. The campus is beautiful. I like Texas a lot now. They’ve jumped up my list.”

Kimber wants to narrow his list to five and set up official visits. He expects Texas to make the cut because of the impression left on him by assistant coach Jason Washington. The two spent 1-on-1 time together on Saturday watching film and discussing how he fits the mold of a Texas cornerback.

“I liked the way he coaches and the energy he brings,” Kimber said. “I fit the mold of a cornerback that they like because I can play all coverages and at nickel. My decision will come down to relationships and how comfortable my family and I are with the coaching staff.”

Another DFW-based cornerback on Texas’ radar is Ryan Watts. The 6-2 three-star from Little Elm was on campus for Texas’ junior day and spent the past two weekends impressing in coverage at camps held by Under Armour and Nike. He’s a long, athletic corner with massive potential.

“Texas was one of my top five trips so far. They gave me a lot of 1-on-1 time,” Watts said. “I have a good relationship with coach Washington. They’ll give me a chance to play early because Texas uses so many defensive backs.”

Watts wants to commit this summer and listed Oklahoma, Texas A&M, Notre Dame and Cal among his other favorite schools. He’s used the elite camps to improve and take stock of his current talents.

“It’s nice to go against the best competition in DFW,” he said. “It was humbling and a chance to learn.”

Watts says he’ll pick a school based on the tradition of putting cornerbacks into the NFL as well as education and having a good relationship with the coaches. He even mentioned coaches’ contract lengths and the idea of choosing a school that knows the head coach isn’t in jeopardy of leaving before he graduates.

Arlington athlete Jahari Rogers was another defensive back who made his way to Austin for junior day and took part in The Opening regional at The Star in Frisco on Sunday. The 6-foot three-star can play wide receiver or cornerback. Texas likes him on defense and Rogers enjoyed the message presented by the coaching staff on his trip.

“One of the best visits I’ve been on during the process. It was wonderful,” Rogers said. “I’m an athlete that can play defensive back. They like my speed and length for defense and special teams.”

Hanging out with Washington was the highlight of his trip.

“He’s always off the wall with his emotions,” Rogers said. “He develops players to go to the league and that’s what I want to coach me. Just watching the videos and seeing how they do things here. Seeing how happy the players and coaches are is crazy. It was eye-opening.”

NFL combine: Kyler Murray won the weekend in Indy; will he also be the draft’s first pick?