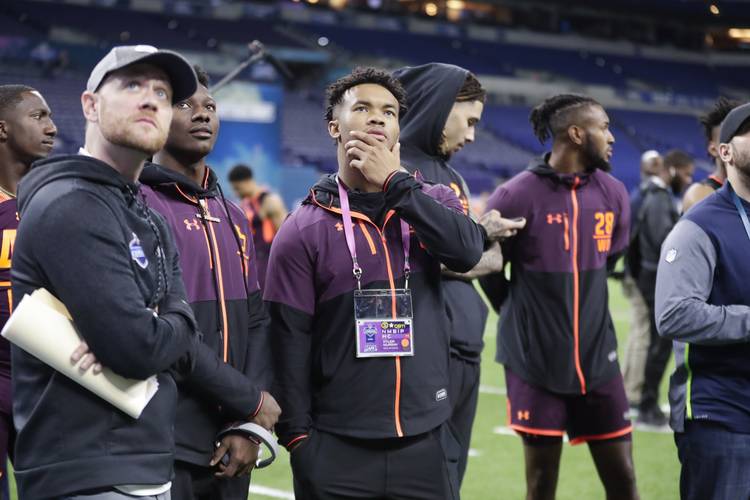 Want to know who’s trending now that the NFL scouting combine has finished in Indianapolis?

Kyler Murray. He stepped on the scale, weighed 207 pounds and was a shade over 5-foot-10. He talked to some teams, but didn’t throw a ball, run a 40-yard dash or try to jump to the clouds. Yet the former Oklahoma quarterback has zoomed to the top of the draft lists, displacing a host of defenders, to be the favorite to become the top pick in next month’s draft.

If Murray does go No 1, he’d be the second Sooners quarterback to do so and it would be the third straight year that a homegrown Texan tops the draft, from Texas A&M’s Myles Garrett in 2017 to Oklahoma’s Baker Mayfield in 2018 to Murray.

Murray, without doing much, won the combine. He’ll work out on campus for NFL teams on March 13. In the meantime, the Arizona Cardinals and new coach Kliff Kingsbury — who recruited Murray when he was starring at Allen High School — is on the clock. The Cardinals drafted Josh Rosen last year with the 10th pick of the draft. But the buzz this week suggests Rosen will be traded so that Kingsbury can select a quarterback who’s familiar with his up-tempo style.

“The Cardinals fully commit to Kliff Kingsbury and his vision in this scenario, which will lead the team to trade Josh Rosen,” said NFL.com analyst Daniel Jeremiah, who predicted Murray at No. 1, zooming him from 14th overall in his ratings last week to No. 1 this week.

The NFL is all about trends. Teams want the next Patrick Mahomes, who dazzled for Kingsbury at Tech. Mayfield won at Cleveland as a rookie. It makes sense to swing for another Big 12 quarterback.

But at least one NFL analyst is stomping on the idea of Murray going so high. Charley Casserly, the former general manager of the Houston Texans and Washington Redskins, now breaks down the draft for the NFL Network. His assessment of Murray was harsh, saying Tuesday that Murray’s interviews in Indy raised red flags of concern. He based his analysis on information he’d received from two unnamed teams.

“He better hope Kingsbury takes him No. 1 because this was not good,” Casserly said. “These were the worst comments I ever got of a high-rated quarterback and I’ve been doing this a long time. Leadership, not good. Study habits, not good. The board work (drawing up plays) below not good. Not good at all in any of those areas, raising major concerns about what this guy is going to do.

The time between the combine and the draft also can be described as the tear-down stage. There is more information on prospects. But no team wants to tip their hand.

Other players from the state or Big 12 thrived at the combine.

Johnson’s 40 time of 4.43 was the fourth-fastest all-time for a linebacker running at the combine. It tied for second this year behind two likely first-rounders, LSU’s Devin White and Michigan’s Devin Bush.

“I just want to show I’m one of the top defensive linemen in this class,” Keke told reporters. “I just want to prove that to everyone and keep getting better.”

The next phase of scouting starts almost immediately with the on-campus workouts.

These sorts of position drills, which are scripted, might not be too revealing. But it’s the next session of judgment for players like Murray and others hoping to join him at the top of the draft boards.