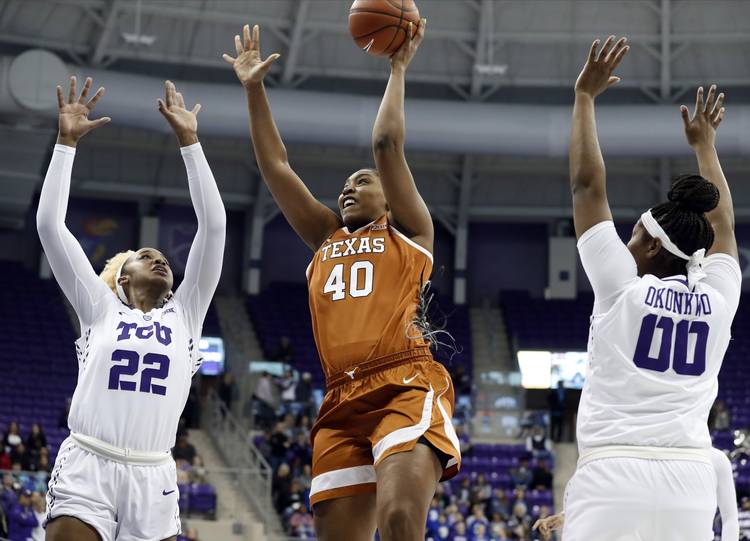 FORT WORTH — Texas didn’t gain control Tuesday night against TCU until Sug Sutton put the game in her own hands.

In a game the Longhorns sorely needed, the junior point guard scored 21 points and dished out six assists in a 62-48 Big 12 victory over TCU in the regular-season finale at Schollmaier Arena.

On Saturday, the Longhorns and Horned Frogs will rewind and do it it again.

Texas (22-8, 12-6 Big 12) is seeded third in this weekend’s conference tournament and will open with sixth-seeded TCU (20-9, 10-8) in the first round Saturday night at Chesapeake Arena in Oklahoma City.

Karen Aston described Tuesday’s effort as “a team win” because the Horns received contributions from many sources. Sutton was spectacular and Joyner Holmes had her third double-double (10 points, 11 rebounds), but that was only part of the story. The coach pointed to role players such as Jada Underwood, Destiny Littleton and Charli Collier for plays that “don’t always show up in the box score.”

Perhaps the most telling stat was TCU’s point production in the fourth quarter. On their senior night, the Horned Frogs scored only four points in the pivotal period as Texas turned a close game into a runaway victory.

“We’re better when we play as a team and don’t rely on just one or two players,” Aston said.

As an example, Underwood scored 8 points to go along with three rebounds and three assists. Littleton had six points, including a late 3-point bomb that helped put the game away. Aston shuttled on nearly every dead ball to substitute offense for defense — and vice versa.

Does Tuesday’s game have any bearing on Saturday’s rematch?

“We’re going to have to wipe the slate clean and come in with the same mindset we had today,” Sutton said.

Sutton was hot early, scoring UT’s final 10 points of the first quarter to keep her team in contention. She hit 10 of her 16 shots. Jatarie White was an offensive presence, scoring 11 points while hitting five of her six shots from the floor.

TCU coach Raegan Pebley stated the obvious after watching her team shoot 31.1 percent from the field (19-for-61).

“We’ve shot as bad as we’ve shot in a long time,” Pebley said. “From the three-point line, the field, free throws. That gave Texas an opportunity to get some defensive rebounds. There are elements of this game we’ll have to learn from. ”

Pebley said Sutton “got too comfortable” and that it cost the Frogs.

“She capitalized on it,” Pebley said. “She’s a great pull-up player and we knew that about her. We’ll have to do a better job on her in Oklahoma City.”

Top-ranked Baylor, Iowa State and Texas are locks to make the NCAA Tournament. As for the rest of the Big 12, West Virginia and TCU will be raising their hands to get into the field, too. Pebley noted that no Big 12 team with 10 conference wins has been left out of the NCAAs since 1999.

This was the final home game for one TCU senior with Central Texas roots. Stony Point graduate Jordan Moore, who has established herself as one of the top post players in the Big 12, finished with 15 points and eight boards. Another area graduate, Bowie’s Kianna Ray, had a tough night, going 0-for-9 from the field.

NFL combine: Kyler Murray won the weekend in Indy; will he also be the draft’s first pick?

The Dotted Line: Scouting reports on Texas targets, commits from The Opening regional