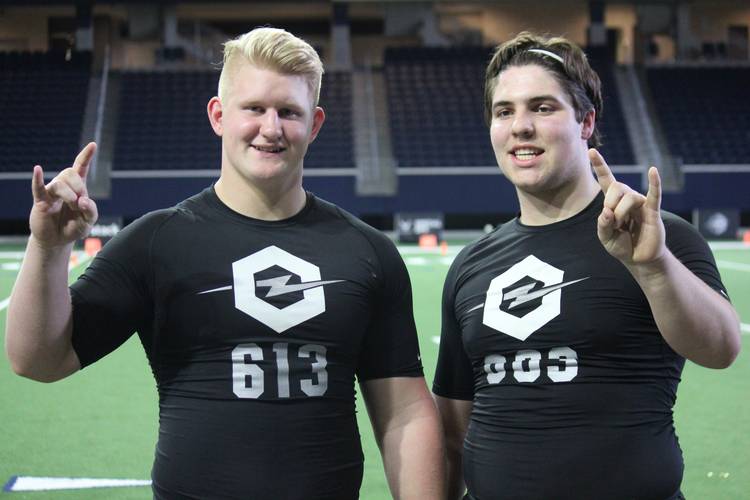 It’s hard to deny tangible progress. Texas football coach Tom Herman took over a program reeling after losing to Kansas and missing out on a bowl game in 2016. He’s since signed consecutive top-three recruiting classes and is fresh off a Sugar Bowl victory over Georgia and a 10-win season. Those are steps forward.

The nation is noticing. The Opening is a Nike-sponsored camp that travels the country testing the best prospects in the nation. The Dallas regional was Sunday in Frisco at The Star. Not only did the event bring in top-end talent. It also brought in national recruiting experts like Barton Simmons, the director of scouting for 247Sports.

“Clearly, you can’t just show up to work and win at Texas. That’s sort of what people expect, but that hasn’t happened,” Simmons said. “Herman came in and dealt with some setbacks like a loss to Maryland and challenges on the depth chart at key positions and he’s still weathered the storm and has the program trajectory pointing upward.”
Advertisement

Texas is back, as starting quarterback Sam Ehlinger proclaimed after beating Georgia in New Orleans. It brought back memories of Vince Young at the Rose Bowl a year before the Longhorns won a national championship over USC. That’s where Herman wants the program, and he’s on his way.

“That program needed to be steadied and find belief,” Simmons said. “As we get into Year Three, I feel like the mojo is back and that is what we expected out of Herman.

“Texas hasn’t always met expectations. He’s taking a national approach and the brand is strong. That’s a testament to what he’s done as much as anything.”

Texas dominated the state on the recruiting trail in 2018. It went national for 2019. The Longhorns already hold commitments from five players in 2020. Three of those were at The Opening regional, including offensive linemen Logan Parr and Jake Majors.

“The offensive line commits are solid. Those guys aren’t going to be first round NFL Draft picks, but you know what you’re getting with Parr and Majors,” Simmons said. “Both are sound fundamentally and possess an edge about them on the field. They can also play both guard and center and that gives them versatility. They’re nice foundational pieces.”

The offensive line commit that excites Simmons the most is Port Neches-Groves tackle Jaylen Garth.

Parr and Majors enjoyed their time together at The Opening regional. The two have grown close through social media and texts. The camp gave the future teammates an opportunity to bound in person and also recruit a pair of key big men.

“He lives in a different area than me, but getting together is great,” Majors said. “We’re up here trying to get some of these other guys to come join us.

Those two players were 2020 defensive end Prince Dorbah and 2021 offensive tackle Tommy Brockermeyer. The duo were arguably the best players at their respective positions over the past two weeks at the elite camps run by Nike and Under Armour. Dorbah is a potential B-backer who listed Texas as his current leader. Brockermeyer is the son of former Texas standout Blake Brockermeyer and could be the best prospect in the state for the 2021 cycle.

Both plan to play on the interior of Texas’ offensive line. Versatility is key for every position and the duo will cross-train at guard and center once on campus. Offensive line coach Herb Hand and the evolving speed of the recruiting game gave the four-star offensive linemen the comfort to commit early.

“It’s connections. I have a great connection with coach Hand and he made me feel comfortable,” Parr said. “We’re able to go on more visits now and get information earlier in the process because of how much we can communicate with coaches and other prospects.”

Looking for the finish line: Texas’ Daniels wants to finish the way she started, with 60-meters gold

The Dotted Line: Texas wants them, but Ja’Quinden Jackson, Brennon Scott in no hurry to pick a college