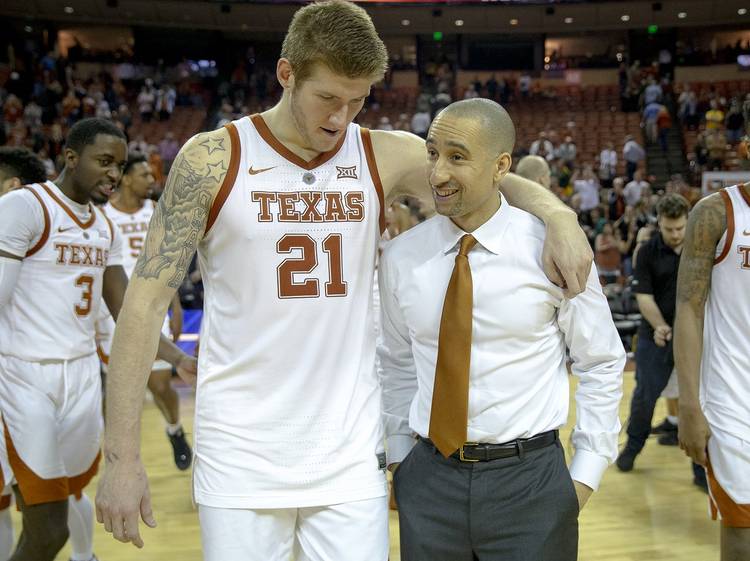 First, a simple request. Let’s all agree to remember Dylan Osetkowski as a clean-cut Californian with an almost Army-like flat top. That braided wolf man look from 2018 brought howls all right. Of laughter.

“The people need to remember what I gave them last year,” Osetkowski said. “It’s a chameleon almost. Always changing.”

Two days before his final home game at Texas, the truth finally emerged about last year’s ’do.

“My girlfriend was the one who actually suggested it and started braiding my hair,” Osetkowski said. “She said, ‘You should do this for a game.’ I was like, ‘Are you kidding me? Look at me right now!’ I could not take myself seriously.”

But what should be remembered and celebrated about this San Diego native was how Osetkowski used the last five years to take control of his life, body, education and future.

Here’s an example of someone who didn’t get many Division I scholarship offers, signed with Tulane, played there for two years and then wanted something better. Instead of moping, Osetkowski did something about it. He transferred up, something that’s rare for most college athletes, sat out for one year and then had two productive seasons at Texas.

Osetkowski will graduate in May with a degree in American studies and a minor in communications. He did college right, and Texas fans should honor that commitment during senior day activities before an 11 a.m. game Saturday against TCU.

“When Dylan has had a mindset of attacking, going after it with nothing to lose, he’s been terrific,” UT coach Shaka Smart said. Sounds like that should be Osetkowski’s life mantra as well.

Osetkowski averaged 11.3 points as a freshman and 13.9 points as a sophomore at Tulane. When he looked to transfer, he narrowed his choices down to Texas and Arizona. It was go big or go back to California.

“Didn’t really know what to expect coming in,” Osetkowski said. “Always wanted to be at like a big-time Division I school, never really knowing what it was. My brother went to Columbia, so again, never had a feel of a big-time school like this, playing on this stage. But it’s met and surpassed any expectations I’ve had for sure.”

Playing in the Big 12 was “a once-in-a-lifetime opportunity that not many people can say. To be at a place like Texas, it’s surreal.”

Osetkowski sat out the 2016-17 season after transferring. Most days, he worked out privately with Smart after practice. Since he couldn’t play, he was relegated to cheerleader for Jarrett Allen and a team that ultimately finished 11-22.

“That year was a growth year of just becoming a man, having a different type of grind that year than what a normal college basketball player goes through,” Osetkowski said.

The next season, Osetkowski moved into a full-time role as a starter. He averaged 13.4 points and 7.2 rebounds but probably played too many minutes (35.2) as the season wore on. Stress likely played a factor in his weight gain, and the facial hair didn’t exactly help.

There were big moments, like his corner 3-pointer to beat Virginia Commonwealth in Richmond. Others weren’t so good, like that ill-fated inbound pass against Nevada in the NCAA Tournament.

During the offseason, Osetkowski got religion — as far as his body was concerned. A team nutritionist would visit him and his girlfriend at their apartment and teach them how to cook healthy meals. At Big 12 media day, he boasted about getting back down to 250 pounds.

With Jaxson Hayes and Jericho Sims in the fold this season, Osetkowski didn’t have to play as many minutes. He’s averaging 10.2 points and a career-high 7.6 rebounds while getting almost 29 minutes per game. And just like laying off the pizza, Osetkowski has also stayed away from too many 3-pointers this season. The last two months, he’s backed defenders into the paint and gotten better shots off the low block.

And like any senior, he has become more vocal. He practically berated teammates during a timeout at Georgia when things were falling apart. “Yeah, we’re at a crossroads right now,” he said afterward.

Texas bounced back three days later to beat No. 11 Kansas. Smart’s club (16-14, 8-9 Big 12) has likely pieced together enough wins to get into the NCAA Tournament. A win over the Horned Frogs (18-12, 6-11) would give the Longhorns a .500 record in league play — making them a virtual lock for the postseason. Right?

“I should have known you were going to ask that,” Smart said. “I feel like we’re in a big game against TCU at 11:00. I know this: You put yourself in a better position to answer that question if you win. So that’s where 1,000 percent of our focus is.”

Osetkowski’s focus is on finishing as strong as possible. Who knows what his basketball future looks like come April. He wants to wear that burnt orange as long as possible.

“I’m exactly where I want to be, to be honest,” Osetkowski said. “Just having an opportunity to go play in the NCAA Tournament, having every game matter. At Tulane, I think I was in games where it was win or lose and nothing was going to happen.

“So to be in these games like these the past few weeks, to be in the place we are as a team, my emotions are just extremely excited. Just grateful for every game I have left.”

Is the season out of grasp? Texas women, expectations and all, want to turn it around

Sam’s the man, but who’s No. 2? QB Casey Thompson moves into backup spot at Texas