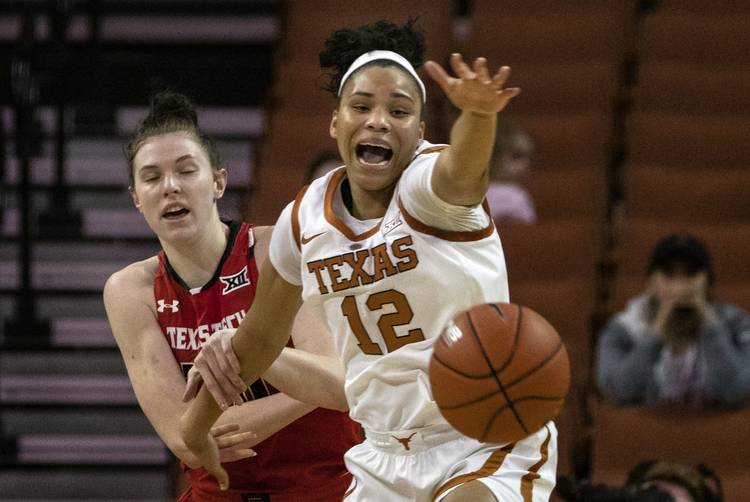 Texas Jada Underwood, (12), is fouled by Texas Tech Brittany Brewer, (20), as she reaches for the ball during the first half of NCAA basketball action held on Saturday Feb. 23, 2019, in Austin, Texas. Texas defeated Texas Tech 81-57. [Rodolfo Gonzalez for AMERICAN-STATESMAN]

Karen Aston has heard grumblings from the fan base that 22 victories in the regular season is somewhat disappointing.

On the surface, it appears the Texas women have reason to brag. The Longhorns have been ranked all season, haven’t lost more than two games in a row and is a lock to make the NCAA Tournament.

At Texas, though, being good is not good enough. The Big 12 trophy still resides in Waco. The Longhorns aren’t expected to be a top four seed in the NCAA Tournament, meaning they won’t play any games at home.

Advertisement
Aston says the public has a right to demand more.

“I do understand the expectations at Texas,” Aston said. “I understand that not winning the conference and not hosting is a disappointment. It’s disappointing that we’re not giving our fans an opportunity to see us against (this year).”

Texas (22-8), which opens the Big 12 tournament against TCU on Saturday night in Oklahoma City, certainly has the pieces to become a Final Four team. All-conference guard Sug Sutton was the sixth-ranked overall high school recruit in the country in 2016. Sharp-shooting guard Danni Williams was ranked 35th in the country coming out of Clovis, N.M. in 2015. Forward Joyner Holmes was ranked No. 2 nationally when she came out of Cedar Hill in 2016. Jatarie White, who transferred in from South Carolina, was ranked seventh coming out of Charlotte, N.C. in 2014. And Charli Collier, the freshman post from Barbers Hill, was ranked No. 2 in the country.

To be fair, Texas’ top offensive player, Lashann Higgs, missed the entire season after tearing her right ACL in November. And one of the Longhorns’ top recruits, 6-7 post Sedona Prince from Liberty Hill, suffered a broken leg in August and missed the whole season. Holmes missed the first eight games after having surgery on her right ankle.

The Longhorns won the first eight games of the season, then stumbled on back-to-back Sundays at home to top-10 teams Mississippi State and Tennessee. Surprisingly, they struggled at home, going just 10-6 at the Erwin Center. They’re 9-2 in true road games.

“We don’t have a lot of fans when we’re on the road, so we become our own cheerleaders,” Sutton said. “We carry a ‘dog mentality on the road.”

So, where exactly does Texas stand?

According to Charlie Creme, ESPN’s bracketology expert, the Longhorns are projected to be a No. 7 seed in Raleigh, N.C. Texas ranks No. 26 in the RPI that the NCAA uses to project its 64-team tournament field. UT’s strength of schedule ranks 27th.

Texas can improve its standing with a good showing in Oklahoma City. The Longhorns have gone 8-5 in the conference tournament over the last five years, winning their opening game every time. And they’re coming off one of their best games of the season, a 62-48 win over TCU on Tuesday in Fort Worth.

“This is a group that has never been able to find its rhythm,” Aston said. “Hopefully we’ll catch fire in post-season play. That’s a real possibility. I’m proud of the team’s resilience this season.”

12 big things about Big 12 basketball: The field did it; the streak is over

Clean-cut Dylan Osetkowski on his final home game: ‘To be at a place like Texas, it’s surreal’