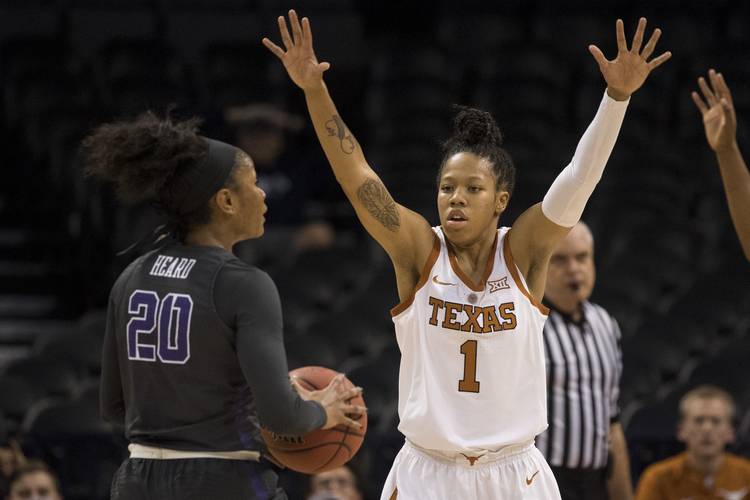 Texas point guard Sug Sutton scored 13 of her 15 points in the second half in victory over TCU. Photo courtesy of Patrick Meredith

With Texas holding a 63-61 lead over TCU with 56 seconds to play, the Longhorns junior stole and in-bounds pass and hit a contested layup to give her team a four-point lead.

That turned out to be pivotal for the Longhorns, who held on for a 66-64 victory over the Horned Frogs in a Big 12 tournament game Saturday night at Chesapeake Arena. Texas (23-8) advances to play Iowa State in a semifinal at 4:30 p.m Sunday.

Advertisement
After Saturday’s victory, Sutton said she had a feeling she would come up with the big steal after TCU had called a timeout.

“I could feel the energy go right through me when we huddled up and I told myself I was going to make that steal,” said Sutton, who was named to the first team on the All-Big 12 team. “I went out there and (TCU guard Jayde Woods) threw her body at me and I went out there and got the ball.”

This was the second time in a week Sutton was the Longhorns’ key in a victory over TCU. She scored 21 points in a 62-48 victory on Tuesday in Fort Worth.

Texas guard Danni Williams, who had just two points in Tuesday’s win, led the Longhorns with 20 points on Saturday. It marked just the second time this season she has reached the 20-point plateau.

Sutton scored 13 of her 15 points in the second half to help offset a gutsy TCU effort. There were 17 lead changes. Texas would take the lead for good when Sutton banked in a shot with 59 seconds to play to give the Horns a 63-61 edge.

“My teammates just told me to keep shooting the ball,” Ray said.

TCU, considered a bubble team to make the upcoming NCAA Tournament, had its chances. Trailing 65-63 with 3.6 seconds to play, guard Lauren Heard could have tied it with a pair of free throws, but her first shot was off line.

UT’s Williams closed the scoring for both teams with a free throw. Trailing by two, TCU did not get a shot off in time as the buzzer sounded.

For Williams, a graduate transfer from Texas A&M, this was a statement performance after her 1-for-9 night in Fort Worth.

“I had to go back and look at the film (following that game) and tonight my teammates were putting me in good positions to score,” she said.

Texas coach Karen Aston told her players in the locker room that it was “a gut-check” victory. She said TCU showed “more urgency” than Texas and “we probably shouldn’t have won.” Aston, though, said her team’s composure during the frenetic fourth quarter was vital in the victory. Senior post Jatarie White had 14 points and tied Sutton with for rebounding honors with nine.

Baylor, which blew out Texas Tech 100-61 on Saturday, will play Kansas State in Sunday’s other semifinal. Texas and Iowa State split their season series. Cyclones coach Bill Fennelly, who sat courtside for the Texas-TCU game, expects the Longhorns to be a physical challenge.