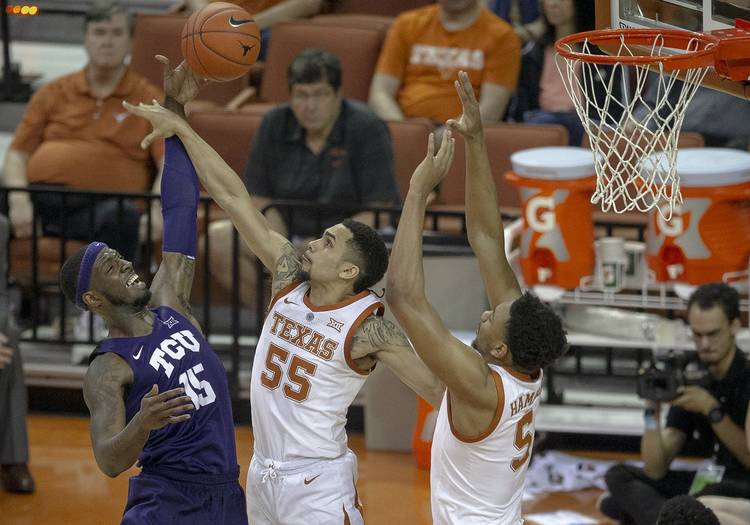 Saturday’s regular-season finale against TCU was as embarrassing as it gets for a Texas basketball team struggling to stay relevant.

The under-manned Horned Frogs, a team down to only seven scholarship players, didn’t just power their way to a 69-56 victory at the Erwin Center.

Nope, they did it with such style and panache that it left you wondering if the know-it-alls have it all wrong.

“Never been so disappointed as I am right now,” Texas coach Shaka Smart said.

It was the kind of loss that makes it harder to defend why Smart should return for a fifth season, regardless of the eye-popping $13-million buyout total or not. Smart is now 66-65 in four seasons at UT and 10 games below .500 in Big 12 play.

The Horns have yet to win an NCAA Tournament game on Smart’s watch, and if this team doesn’t make the field of 68 this season, UT fan apathy, not anger, will only grow.

“This isn’t who we prepared to be,” Smart said. “This isn’t how we practiced the last three days. Obviously I think there some tentativeness, for whatever reason, in our guys once the game started the way it did.”

Desmond Bane sure did a number on the Longhorns. The TCU junior had a career-high 34 points by hitting 6-of-8 3-point shots and going 14-for-20 overall. The guy was unstoppable and practically couldn’t miss.

Bane opened the second half with a 3-pointer practically from the corner of Sixth and Congress, smack dab in the heart of South by Southwest.

The Frogs just out-hustled the Horns virtually everywhere. TCU finished with a plus-11 rebounding margin, a sure sign of heart and desire.

UT freshman Jaxson Hayes, who could jump into the NBA draft this summer, had a team-high 19 points and seven rebounds. As for that 19-5 run that TCU used to close out the first half, Hayes said, “We just kind of drifted, and I don’t know what you want to call it, but they took that run and it got them going.”

Texas shot 37 percent overall and went 4-for-19 from 3-point range. The Frogs just kept gobbling up the defensive boards and going the other way.

“We came in and we knocked some bodies around,” Bane said. “If you outbound a team on the road, it’s clear — especially if you do it by 11 — the energy and effort you’re playing with.”

The Longhorns were supposed to have a fun time Saturday on senior day. Dylan Osetkowski and Kerwin Roach II were both given framed jerseys and honored before the game.

Osetkowski had nine points but only two rebounds in 29 minutes. Roach remains on indefinite suspension for an undisclosed violation of team rules.

“Yeah, this wasn’t the easiest game to finish off the regular season,” Osetkowski said. “Give them credit. We just didn’t do what we needed to do.”

Texas was 3-for-11 from long range in the first half, and the guards tried to penetrate. Matt Coleman III had some mid-range floaters go down this time as opposed to Monday night in Lubbock. He finished with 12 points but had only two assists in 35 minutes.

Did the Horns ever wave the white flag?

“Not necessarily,” Bane said. “They were hitting some threes. Hayes got a dunk and was screaming, so I knew they weren’t technically going to stop playing. But you’re down 17.”

Texas is likely to be the No. 6 seed in next week’s Big 12 tournament. The Longhorns reward? UT gets to play No. 3 seed Kansas in the Sprint Center, a place smack dab in the Power & Light District and a magnet for die-hard Kansas fans.

It’s also the third-straight year the Longhorns have finished in the bottom half of the Big 12 standings.

Can these Horns win three games in three days to grab an automatic berth in the NCAAs?

“I think the team has it in them,” Smart said, “but we have to play way better than we played today.”

Sam’s the man, but who’s No. 2? QB Casey Thompson moves into backup spot at Texas