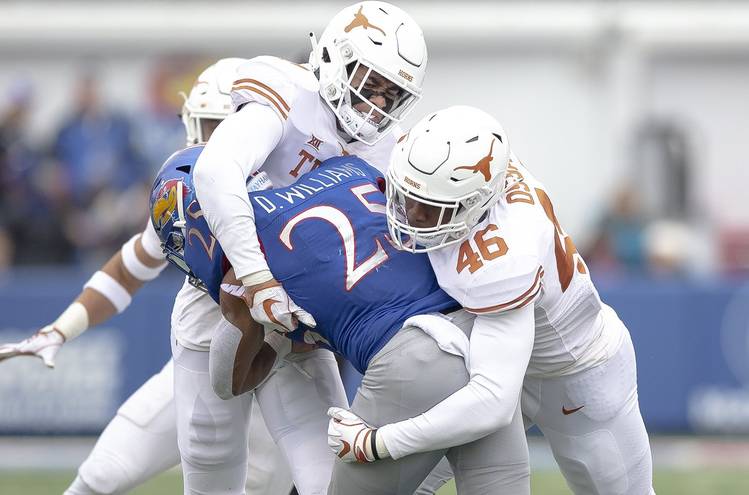 The 2019 Texas spring football roster looks somewhat odd without Jerrod Heard’s name anywhere on it. Same is true for Shane Buechele. Alas, time marches on, and so do the Longhorns.

For example, Texas is stacked at wide receiver with Collin Johnson and Devin Duvernay, both of whom will be seniors this fall, leading the way. But there’s a slew of players across the age spectrum, all the way down to freshman Bru McCoy, a national high school player of the year award winner who’s already on campus.

Offensive lineman Patrick Hudson’s name is missing. Coach Tom Herman said Hudson was “currently taking some time away from the team just to kind of figure out what he wants to do moving forward and weigh all of his options.” The Silsbee native has been sidelined by knee injuries.

Tight end Rob Cummins is now listed as a defensive lineman along with going from jersey number 99 to 90. The Horns are rebuilding their defensive line, and all help is welcome.

Running back Keaontay Ingram has added 10 pounds. The Carthage product was listed at 205 pounds last season, and Herman indicated he wanted Ingram to be heavier to withstand a bigger workload. Now he’s listed at 215 pounds.

Here’s a look at each position group going into the fall with each player’s classification for the 2019 season:

Sam Ehlinger simply needs to finish the spring healthy. That’s it. Period. He did not require offseason shoulder surgery but could have a lighter throwing schedule than normal. Casey Thompson has elevated to No. 2 after Buechele and Cameron Rising transferred out. Thompson, who redshirted last fall, needs to play well to keep that spot. Roschon Johnson will spend the spring learning the offense.

The numbers have thinned out at this position because of transfers, but the coaching staff is probably fine with that. Ingram averaged a team-high five yards per carry last season. This is a good month for Daniel Young (3.6 ypc) to remind coaches of his talents. It’ll be interesting to see what Whittington — who originally figured to play receiver — can do. He was a multi-position star at Cuero.

Jordan Whittington, Fr. — Nation’s No. 2-rated athlete will wear 21 at Texas, which could work either as a running back or a receiver

Kirk Johnson, Sr. — His career has been limited by injuries; his brother, Collin, has posted short videos with optimism saying this will be Kirk’s breakout year.

Collin Johnson and Devin Duvernay are firmly entrenched. But who’s going to replace the versatile Lil’Jordan Humphrey? The recruiting sites were gaga last summer over Brennan Eagles and Jordan Pouncey. Time for them to make a move. Joshua Moore had seven catches last season. John Burt will spend his spring running for the Texas track team.

Devin Duvernay, Sr. — Finally has his chance to shine in the spotlight

John Burt, Sr. — We won’t likely see him in pads; Burt is running track this spring

Joshua Moore, So. — Played in the first six games as a freshman (7-53-1) before suffering a season-ending injury

Bru McCoy, Fr. — The No. 1 athlete prospect in the country (and former USC signee) will wear 5 as a Longhorn

Brennan Eagles, So. — Came in with high expectations, but started just once and finished with 1 catch for 35 yards

Al’Vonte Woodard, Fr.* — Another highly-regarded receiver from the 2018 recruiting class; he redshirted

D’Shawn Jamison, So. — Didn’t make much of an impact as a freshman receiver, but did have a punt return TD at Kansas State

Jordan Pouncey, So. — Was mostly a special teams player as a freshman

It’s hard to replace someone like Andrew Beck, a fifth-year senior last season who was a team captain and could virtually do it all. He had a career-high 28 catches for 281 yards and two touchdowns in 2018. How will the Horns handle this position going forward? Cade Brewer and Reese Leitao were mostly role players last season and helped on special teams. Malcolm Epps is an athletic freak.

Cade Brewer, Jr. — Now he’s the most experienced TE on the roster, with 3 starts in 24 career games played

Reese Leitao, So. — Was mostly a special teams player last season after redshirting in 2017

Jared Wiley, Fr. — Played quarterback at Temple but is transitioning to tight end in college

The Horns were fortunate that Calvin Anderson was so good as a graduate transfer. He had a terrific season at left tackle, but it was only a one-year situation. Samuel Cosmi started most of the season at right tackle. Derek Kerstetter has trained at both guard and tackle. Don’t get too worked up over who’s listed at tackle or guard. Offensive line coach Herb Hand will try them at both.

Samuel Cosmi, So. — A redshirt season in 2017 helped him; he started the last 13 games last year at right tackle

Tyler Johnson, Fr. — One of the highest-regarded pieces of the 2019 signing class, he may be asked to play early

The biggest offseason news was the late acquisition of Parker Braun, a first-team All-ACC pick from Georgia Tech. He’s coming to Texas a graduate transfer, but won’t be here for spring practice. Braun is a plug-and-play starter,  just like Anderson was. That’s bad news for some who thought they could earn playing time just by hanging around. Keep tabs on Junior Angilau and Rafiti Ghirmai this spring.

Denzel Okafor, Jr. — Has seen duty at both tackle and guard

Texas coaches have come to bank on Shackelford in the middle. It’s hard to imagine anyone else playing that spot. The big man from Belton is a legitimate candidate for the Rimington Trophy, given annually to the nation’s best center. Last year, senior Elijah Rodriguez was considered Shackelford’s backup.

Zach Shackelford, Sr. — With Patrick Vahe departed, Shack’s the veteran presence on the line with 40 career games and 27 starts under his belt

This time last year, not many people thought Charles Omenihu would have the year he did. This group is loaded with potential. It’s up to defensive line coach Oscar Giles to squeeze it out of them. Malcolm Roach missed five games last season with a fractured foot but had four tackles against Georgia in the Sugar Bowl. Ta’Quon Graham also forced a fumble that night.

Malcolm Roach, Sr. — Texas needs him to step up and take over as an edge rusher

Marqez Bimage, Jr. — The chance to make a splash is there for him with the way the roster shakes out

Ta’Quon Graham, Jr. — Another lineman with a chance to impress; he had two sacks and a forced fumble in 2018

Peter Mpagi, Fr. — A good candidate to redshirt this season

Think about the talent Texas has fielded in the middle the last two years — Poona Ford and Chris Nelson. Both were solid anchors that many overlooked when the season began. Gerald Wilbon and D’Andre Christmas-Giles are both cut from similar molds, although neither should copy the “Nellie Rub.” Todd Orlando’s defense is built around holding the point of attack.

Gerald Wilbon, Sr. — Has the chance to step up; has played in 33 games but with only one start so far

D’Andre Christmas-Giles, Jr. — Hasn’t done much so far; has played 19 career games with no starts

Keondre Coburn, Fr.* — Saw some action as a freshman, but redshirted

If Gary Johnson could play one more year with this unit, Texas might have something truly special. But Johnson has moved on, opening the door for others. Jeffrey McCulloch, Joseph Ossai and Ayodele Adeoye could make a fascinating, athletic trio. Demarco Boyd returns after sitting out one season for assaulting another motorist after a traffic accident.

Ayodele Adeoye, Fr.* — Made it into four games last fall, then redshirted

Joseph Ossai, So. — Started twice as a freshman, finished 2018 with 20 tackles and a sack

Marcus Tillman Jr., Fr. — The freshman from Florida will wear No. 13

DeGabriel Floyd, Fr. — Another freshman, the Californian will wear No. 1

Demarco Boyd, Jr. — Has made it into four games in his first three seasons

Last year’s starting corners — Kris Boyd and Davante Davis — just ran full throttle at the NFL scouting combine and are getting ready for next month’s draft. Kobe Boyce, Anthony Cook and Josh Thompson are likely to be the ones stepping up this fall. All got key playing time in tight games last season. Cook had 18 tackles and one sack last season. Jalen Green had two tackles in the bowl game. It’s about finding the right pair in the pass-happy Big 12.

Josh Thompson, Jr. — Started 3 games last fall, should be a factor at corner and nickel

Kobe Boyce, So. — Was a backup corner last year; has two starts in six career games

Montrell Estell, So. — Has been mostly a special teams player and backup DB so far

Brandon Jones flirted with going pro after but smartly decided to stay. Now he’s likely to be one of the most experienced safeties in the league and one of the most dangerous. Caden Sterns had a strong start but faded down the stretch last season. B.J. Foster, the hard-hitting sophomore from Angleton, could become another fan favorite for his tenacity.

Brandon Jones, Sr. — Will miss spring workouts but is the most experienced safety on the roster

Caden Sterns, So. — Had a fast start last season; will look to spread that over an entire season as a sophomore

B.J. Foster, So. — Came on strong over the last half of 2018, and had a very strong showing in the Sugar Bowl win over Georgia

DeMarvion Overshown, So. — Has also played linebacker; was limited by injuries last year

It must be nice for Herman to go into a full calendar year not worried about his kicker or punter. Cameron Dicker became a household name after his 40-yard field goal beat Oklahoma. Ryan Bujcevski averaged 40.3 yards per punt in his first season. Texas managed only one big play last season in the return game when D’Shawn Jamison had a 90-yard punt return for a touchdown at Kansas State.

Cameron Dicker, So. — No worries at placekicker; the Lake Travis product was solid as a rock as a freshman

Ryan Bujcevski, So. — Had his ups and downs, but finished with an average of 40 yards per punt