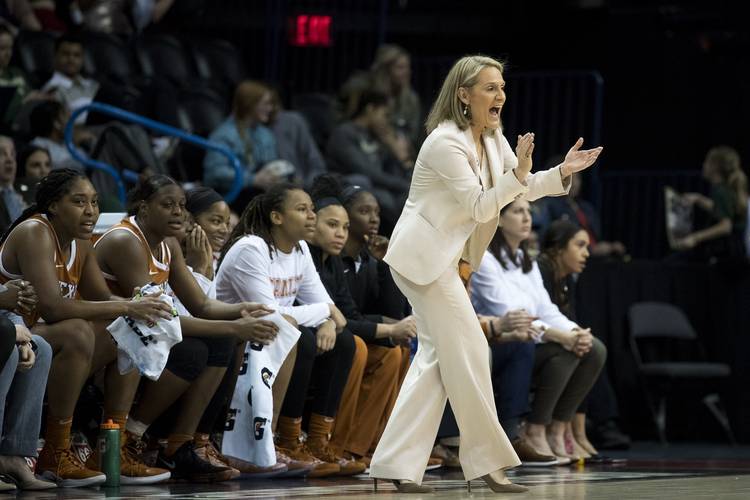 Texas Coach Karen Aston cheers on her team during a second half rally of the Big 12 Tournament semifinal vs. Iowa State. Photo by Patrick Meredith

OKLAHOMA CITY — A spirited comeback by Texas was no consolation for the Longhorns after they were ousted from the Big 12 basketball tournament.

Down by as many as 16 points in the second half, the Longhorns would eventually tie the game on Destiny Littleton’s 3-pointer with 3:22 to play. Iowa State, though, didn’t rattle, and the Cyclones earned a hard-fought 75-69 victory in Sunday’s semifinal at Chesapeake Arena.

The pain of losing such a close game will linger, UT coach Karen Aston said, but she has seen the Longhorns make “considerable progress” in the past two weeks.

“Our team has got to look at this game and say, OK, where we have been better and move forward,” Aston said. “This team has been on a roller coaster all year long, but the team’s cohesiveness is better right now and we’re on an upswing.”

Texas, though, fought back behind Joyner Holmes and Jatarie White, who owned the paint by combining for 37 points and 12 boards. And when Littleton hit her 3-pointer from the left baseline to tie the game, it seemed Texas would pull off a great comeback.

Big 12 player of the year Bridgett Carleton claimed the Cyclones had no reason to doubt themselves.

“We were fine and relaxed (after Texas tied the game) and it wasn’t anything to worry about,” she said.

Iowa State responded after Littleton’s 3-pointer by scoring the next seven points. A bucket by Ashley Jones was following by a layup and free throw by Carleton with 1:48 to play. Alex Middleton capped the rally with a short jumper to give ISU a 71-64 lead.

“This is what post-season basketball is supposed to look like,” Iowa State coach Bill Fennelly said. “That’s a great Texas team and this game was similar to the one we played in Austin (last weekend). We got the big lead and they came roaring back.”

“Everyone was in the huddle telling each other that we need to get out of this hole and play with a lot of heart,” Sutton said. “We’ve been in this position before. So we came back and played with heart.”

In one bizarre play, Texas reserve Olamide Aborowa was assessed a technical foul after blocking a breakaway layup attempt by Carleton with 5:09 to play. Iowa State, holding a 60-59 lead at the time, would score the next four points to stave off that rally. It appeared Aborowa stared at the fallen Cyclones player when she given a technical.

Aston, choosing her words carefully, was not pleased by the call.

“That’s a tough one for me,” the coach said. “I asked that young lady to go in for one minute and do her best. Give Jatarie a break for one minute. And she makes a hell of a play. She didn’t say anything. She didn’t bend down. I have a hard time with that.”

Both Texas and Iowa State are considered locks to reach the NCAA Tournament.