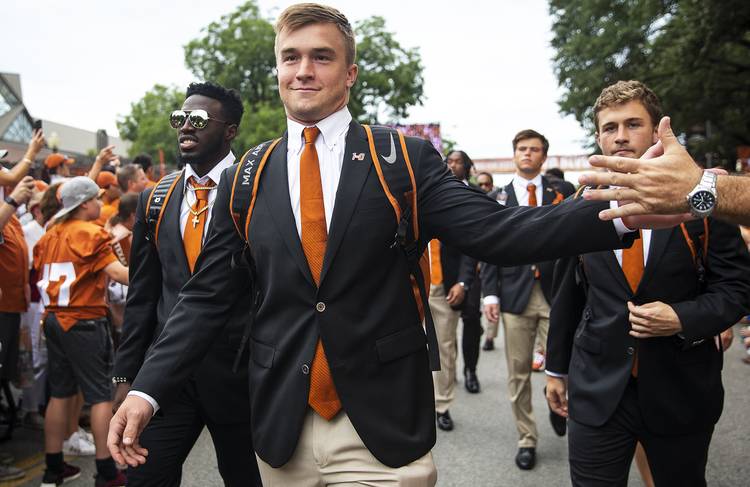 At the end of his media availability on Wednesday, Texas center Zach Shackelford was asked if it was weird that he hasn’t yet been quizzed about quarterbacks.

Shackelford replied in the affirmative. Then, perhaps by habit, the soon-to-be senior shifted to the coachspeak that has been commonplace during recent offseasons at Texas. “All the quarterbacks are really good athletes. They all look great,” he assessed.

No, a quarterback competition isn’t expected this offseason. Players won’t be asked incessantly about which one of their teammates threw better at practice. Fans are going to need to dissect a different position battle at the spring game in April.

For his part, Sam Ehlinger was quick to insist on Wednesday that head coach Tom Herman doesn’t allow much job security. He’ll still need to be better than freshmen Casey Thompson and Roschon Johnson this spring.

But things are changing. For one, Ehlinger is now the oldest quarterback on the roster since Shane Buechele is leaving for SMU as a grad transfer. That means it’s his responsibility to break down the quarterbacks after practices and meetings. Being an elder statesman has brought a “different vibe,” but that doesn’t mean Ehlinger’s on-field mindset has changed.

Last season, Ehlinger started every game. He passed for 3,292 yards and 25 scores. His 16 rushing touchdowns ranked ninth nationally. After being tied to crucial turnovers in three of UT’s losses as a freshman in 2017, Ehlinger set a Big 12 record last year when he threw 308 straight passes without an interception.

Herman has listed Ehlinger as one of the established leaders on the offense. Off the field, Ehlinger has also found a platform for his voice.

Last week, he created an online buzz when he published a series of tweets supporting a bill by North Carolina congressman Mark Walker that would allow student-athletes to make money off the use of their name, image and likeness. One of Ehlinger’s tweets was favored over 7,000 times. He also received some pushback from fans who argued that a paid-for education at the University of Texas was a big-enough benefit.

Ehlinger said Wednesday that he feels blessed by the opportunities that he had been afforded at Texas. He does, though, believe there is a “time and place” for these types of discussions.

“I’m always going to stand for what I believe in,” he said. “As I get older, I’ll become more focused on football and things of that nature, so I don’t necessarily think that I’ll become a bigger advocate or anything like that. I was just voicing how I was feeling.”

Roach returns: Four juniors flirted with the NFL draft, but only receiver Lil’Jordan Humphrey left school early. Receiver Collin Johnson and safety Brandon Jones may not talk to the media anytime soon since they are currently injured. Defensive lineman Malcolm Roach, however, explained his reasons for returning on Wednesday.

The 6-3, 290-pound Roach said he received good feedback from the NFL’s college advisory committee. Still, the versatile defender would like to work on his run-stopping and rushing the passer this fall. His mother also wants the youth and community studies major to get his degree, he said.

“These years, you can’t get back,” Roach said. “I’m having the time of my life in college. I just thought about it; why rush it, why try to get out of here right now?”

With the departures of seniors Charles Omenihu, Chris Nelson and Breckyn Hager, Texas is losing 41 of last year’s 43 starts on the defensive line. Roach pointed out that he, Ta’Quon Graham and Gerald Wilbon aren’t novices. Graham and Wilbon played in all 14 games and Roach has started 11 times during his career.