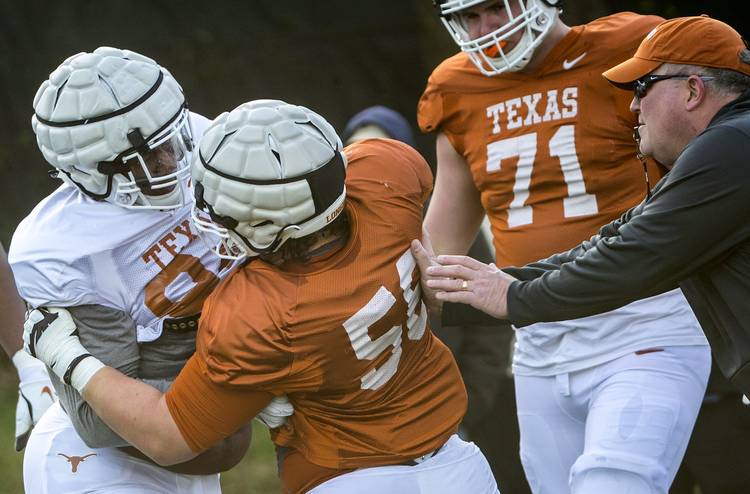 Texas wrapped up the first week of its spring camp on Friday with its first padded practice. The Longhorns were participating in their third spring practice at the Denius Fields, but pads weren’t allowed on Monday and Wednesday. Tom Herman likened his coaching staff to “kids on Christmas Eve last night. It was a little hard to sleep because we were so excited to get out here and see these guys run around and play real football.”

Those pads will go back on the shelf, though, as UT’s spring break is scheduled for next week. When asked if he would have preferred to not have a week-long break in the middle of his spring schedule, Herman said it wasn’t a big deal. In 2017, Texas worked out for a week before its players had some fun in the sun. Last year, all of UT’s spring practices were held after the spring break.

“We’ve done it a lot of different ways,” said Herman while noting that this is the first year he has held Texas’ spring practices in the morning. “You just adjust. We’ve done it this way before where you go a week before and then three weeks after. It is what it is.”

The Longhorns have been given workout plans for the break, and the team has meetings scheduled for 6 a.m. on March 25. Some players will remain in town for the next week. Staycations, however, are not for everybody.

Herman had state troopers and representatives from Austin and UT’s police departments address the team on Thursday. Reminders to use seat belts, obey the speed limit and not text while driving were issued.  Herman told his players to take care of each other. He also warned that “anything that you get involved with that you shouldn’t is an act of selfishness.”

“This is a really nerve-wracking time for coaches because you read some of these horror stories every year,” Herman said. “You just pray that it’s not one of your guys.”

Injury update: Herman announced that sophomore cornerback Anthony Cook will remain in Austin over the spring break as he rehabs an injured hamstring. Cook ran with UT’s first-string defense during the portion of Monday’s practice that was open to the media. Cook was injured on Wednesday, but Herman expressed optimism that he will return to practicing after the spring break. Classmate Jalen Green took over for Cook during Friday’s open session.

Redshirt freshman defensive lineman Keondre Coburn (kidney) was cleared to do individual drills on Friday, but he was a non-contact participant. Early enrollee DeGabriel Floyd (neck) also wore a non-contact green jersey. Herman said that Floyd’s injury was sustained in high school and a timetable was not given for the four-star linebacker’s return.

Herman comments on Jones: While the Longhorns were practicing on Friday, news broke about the passing of UT legend Johnny “Lam” Jones. Jones, 60, was an All-American in football and an Olympian on the track.

Herman never met Jones, but the coach did write to him earlier this week. In his note, Herman said he wrote that the ” ‘thoughts and prayers of your Texas football program are with you.’ Just like all the other greats that have come through here, this is his program.”

“He’ll be sorely missed but certainly not forgotten,” Herman added.

Kansas 65, Texas 57: Longhorns’ season isn’t over, but this sure felt like a funeral