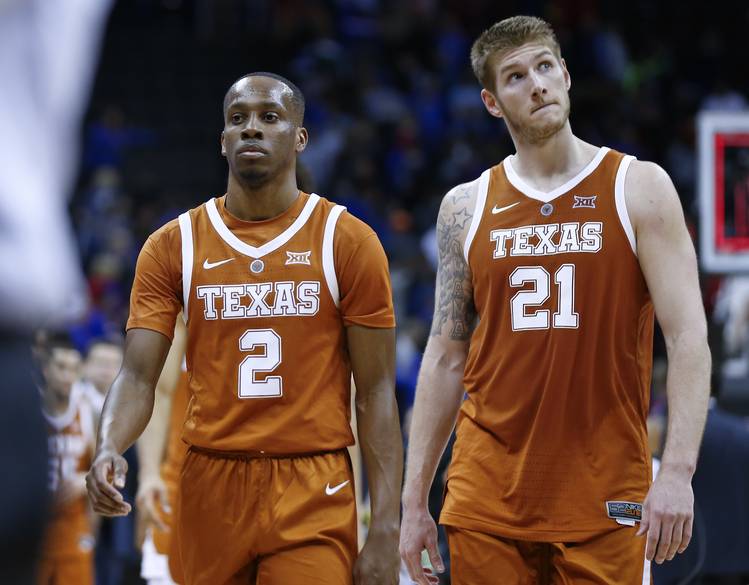 Players spoke in hushed tones. Trainers moved about in silence. Everyone had one goal late Thursday at Sprint Center: Put on your sweats, turn on your headphones and get to the bus.

Texas’ season isn’t over, but it sure felt like the casket lid was closed after a 65-57 loss to Kansas at the Big 12 tournament.

“I told the guys this was a game that we had to win if we wanted to play in the NCAA Tournament,” UT coach Shaka Smart said.

Maybe the NCAA Tournament selection committee does something unpredictable. No .500 team has ever been an at-large selection since the field expanded to 64 teams. Texas is now 16-16 this season, and Smart is now 66-66 in four seasons. It’s mediocrity all around.

“We’re a team that had potential to be a top-10 team in the nation,” guard Jase Febres said. “We just waited too long to show that potential as in being consistent.”

As for what happens now, Febres just shook his head and let out a long sigh. “It sucks. Would’ve, could’ve, should’ve,” he said. “But I feel like if we get that one more chance, man, we’ll make some noise.”

Texas athletic director Chris Del Conte said it’s “crazy” to discuss a coaching change. An administrator who preaches fiscal responsibility simply isn’t going to swallow a $13-million buyout for a sport that will always be a distant second to Texas football. Smart is all but certain to return for a fifth season.

“Shaka’s our head coach,” Del Conte said. “That’s ludicrous talk when we start talking about that stuff right in the middle of the season.”

Asked if Texas passes the eye test for NCAA inclusion, Del Conte said, “Depends on what game you’re watching.” He pointed out that Texas is ranked 38th in the NCAA’s new NET rankings, which is supposed to be a catch-all system for determining who’s good and who’s not. “You know, we’ll see,” he said.

So the Horns shuffled out into the crisp Kansas City night unsure of whether they’ll make the NCAA field of 68 or be relegated to the NIT.

The Longhorns and third-seeded Jayhawks (24-8) actually played to a draw when it came to half-court offense. The difference was in transition. Kansas had 17 fast-break points; the Longhorns had none.

It was fairly nip and tuck all night long, and Texas was within four when Kerwin Roach II hit a 3-pointer with 2:43 remaining. In his first game back from suspension, Roach came off the bench and finished with eight points, three rebounds and one assist in 20 minutes.

“It’s been tough. It’s been real tough, especially not playing,” Roach said. “I just feel like you work hard for something, and you feel like it’s going to be your year. Then it gets taken away from you, it’s kind of tough.”

That 3-pointer turned out to be Texas’ last field goal. The Horns closed out the game by missing their final six shots, a rather poetic way to end things given how the rest of the season played out.

The only Longhorn who should take a bow is Osetkowski, who had a team-high 18 points on 6-of-13 shooting. Febres had 11, but UT’s long-range threat was 1-for-4 beyond the arc in the second half. Courtney Ramey also continued to show why he’s a promising star for next season. Ramey had six points, four rebounds, three assists and lots of hustle.

Texas’ starting point guard, Matt Coleman III, played 27 minutes and had just one assist. Texas’ NBA lottery candidate, Jaxson Hayes, had only two points and played 14 minutes due to foul problems. He went down late after a knee-on-knee collision with Kansas’ Devon Dotson and was being evaluated afterward.

“You haven’t heard anything, but I hope he’s OK,” Kansas coach Bill Self said. “He’s a tremendous talent and got a great future.”

Texas’ future is cloudy at best. The regular-seasons wins over North Carolina, Purdue, Kansas State in Manhattan and Kansas in Austin were big. The losses to Radford, Virginia Commonwealth and Georgia were bad. There’s a mind-numbing zigzag line down the stretch.

“Certainly you want to control your own destiny and that’s the most disappointing thing about tonight,” Smart said.

If Texas’ name doesn’t pop up on the screen on Selection Sunday, the Longhorns can’t say they were surprised.

“Like I said, I think we’ve done enough to put ourselves in a position to play in March and go win games in March,” Osetkowski said.

Even with the injuries, Texas is feeling comfortable at catcher as Big 12 play begins

As spring break approaches, Texas breaks out the pads and safety reminders