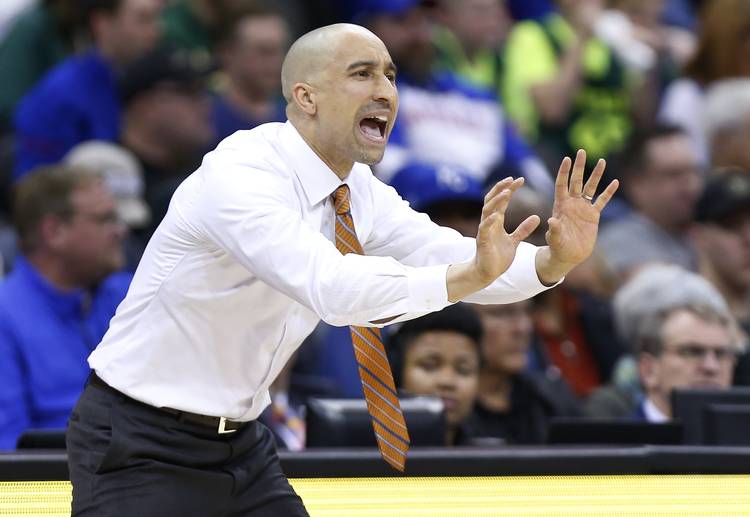 Anyone who brings up Smart’s job status, the jovial administrator with a larger-than-life personality simply says, “I’m not going there.”

Del Conte knows that Longhorns fans are unhappy with a mediocre men’s basketball program. How could he not?

On Twitter, fans light up Del Conte’s mentions after each frustrating loss. Those who aren’t so social media savvy still fire off emails, and yes, the truly disgruntled still know how to use the phone.

Sources at every level of UT administration have told the American-Statesman that Smart will return for a fifth season regardless if the Horns make the NCAA Tournament or not. The field of 68 will be announced Sunday, but no .500 team has ever been an at-large selection. UT is 16-16.

“If you’re going to evaluate teams based on the quality of their wins we definitely, I think deserve strong consideration,” Smart said after Thursday’s loss to Kansas in the Big 12 tournament.

Del Conte pulled a reporter close Thursday night and said, “Remember, it’s about integrity. You can cut corners in search of more wins, but you must have integrity. Think about that during this process.”

This is the same athletic director who has publicly stated that every program at Texas should be among the top-10 nationally and compete for championships.

The Longhorns are no closer to winning a Big 12 championship now than the day former AD Steve Patterson fired former coach Rick Barnes in March 2015. One could argue the program is going backward.

Smart is 66-66 in four seasons and 10 games below .500 in Big 12 play. He’s had two first-round NBA draft picks — most likely three whenever 6-foot-11 freshman Jaxson Hayes leaves — and three straight top-10 recruiting classes. The Horns haven’t even finished in the top half of the Big 12 standings the last three seasons.

At Texas, Smart is 14-29 against ranked opponents. The last three seasons, Texas has been at or near the bottom in scoring and 3-point shooting. This season, the Horns are 4-10 in games decided by six points or fewer. In college basketball, close games are always decided by coaching.

The reason why Texas isn’t changing coaches is far more nuanced than money. Smart has four years left on a contract worth at least $12.9 million, all of which is guaranteed. Even basketball powerhouses like Kentucky and Duke would squirm before eating an eight-figure buyout.

Smart went 20-13 with a roster full of Barnes’ players in his first season. Afterward, UT President Gregory L. Fenves and the UT System Board of Regents tacked another year onto Smart’s six-year deal. It was a sign of support after the tumultuous 22 months under former athletic director Steve Patterson.

That move pushed Smart’s deal all the way through the 2022-23 season.

Let’s assume Texas did want to pay Smart’s buyout and go hire Texas Tech’s Chris Beard, who guided the Red Raiders from total obscurity to the Big 12 championship in three seasons. Beard’s buyout is $6.2 million if another Big 12 team wants him, according to Beard’s contract.

So Del Conte would be paying almost $20 million just to offer the job to Beard. To steal him away at this point, the bidding may start at $3.5 or $4 million annually. That does not include assistants and whatever else a new coach would want.

Any legitimate coach is going to have a hefty buyout. It’s the cost of doing business these days in college athletics.

For Del Conte, who has preached fiscal responsibility in the last year, the money alone makes changing coaches a non-starter.

Men’s basketball turned a $7-million profit during the 2017-18 athletic year, according to audited documents. The year before that, men’s basketball generated $6.6 million in profit. For most of this decade, the program’s profits usually hovered above $6 million.

Texas men’s basketball is simply not a sport that can generate the amount of ticket sales, merchandising and overall revenue needed to offset a $20-million expenditure.

Football, men’s basketball and baseball were the only three sports that turned a profit in 2017-18, documents show. Football’s outlandish $103.5-million profit that year helps fund the school’s other 17 varsity sports, which all lose money. Even Texas, the most profitable athletic program in America, has budgetary limits.

UT fans should not engage in revisionist history, either. All those pining for Barnes’ return should remember this is a program that has won only two NCAA Tournament games this decade. Texas hasn’t been to the Sweet 16 since 2008.

Fans may criticize Smart’s coaching acumen, but Del Conte is happy to keep a person like Smart considering what else he’s dealt with recently. The university fired men’s tennis coach Michael Center last Thursday after he was arrested as part of the nationwide college admissions scandal.

Athletic directors everywhere may be nervous about changing coaches in the midst of another FBI investigation into major college basketball recruiting. Kansas, LSU and Arizona are all fighting fires related to that probe. Who knows what’s to come via wiretap transcripts, unsealed evidence and more possible arrests.

If Hayes jumps into the NBA draft this summer, Texas still has 7-foot Will Baker from Westlake on tap to join the program next season. Freshman Courtney Ramey is growing into a solid guard, and Jase Febres will continue working on his 3-point shot.

Once again, Smart projects to have a roster stocked with athleticism. Translating all that talent into wins, as fans have seen, takes some effort, though.

Texas is two years away from opening a new on-campus basketball arena. School officials want Smart to be the one leading an exciting program into that new building, a high-ranking UT source said.

Whether Texas gets into the NCAA Tournament on Sunday or lands in the second-tier NIT, the Longhorns still have games left in some capacity. It’s Smart’s job to help them find some momentum.

“You know, for us, our focus is on our guys and helping them process this game (Thursday) and understand what we can learn from it,” Smart said.

As spring break approaches, Texas breaks out the pads and safety reminders

What a relief: Bullpen steps up in UT’s conference opener against Texas Tech