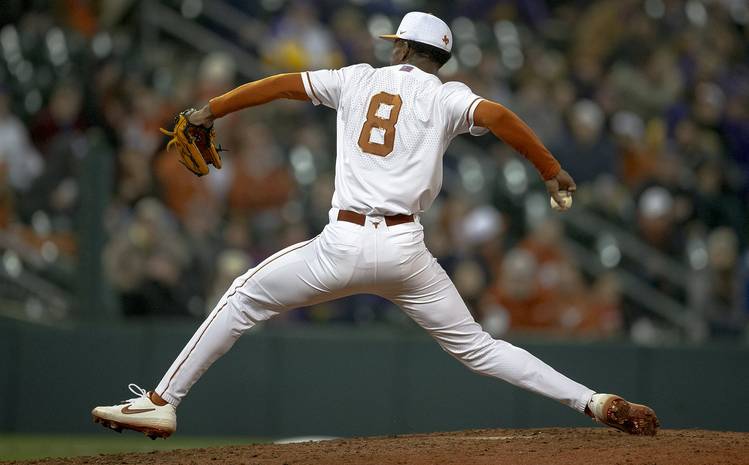 If you ask Zach Zubia, he will tell you that Texas boasts one of the best bullpens in the nation.

Sure, Texas’ sophomore designated hitter may be a little biased. He insists, though, that “I mean that wholeheartedly.” And after Friday night, who is going to argue with him?

Ty Madden and Kamron Fields shut down Texas Tech’s offense on Friday as the Longhorns rallied to a 4-3 win at UFCU Disch-Falk Field. Facing an offense that was averaging 9.1 runs per game, Madden and Fields threw four innings of perfect relief. That performance came two weeks after LSU visited Austin and was limited to four hits over the 9 2/3 innings it dueled with UT’s bullpen.

Ahead of this weekend, Texas Tech and LSU (8.2 runs per game) were responsible for the fifth- and 23rd-best offenses in Division I baseball.

“You’re on a good team and you have a great staff like we do, everybody’s (competing in the bullpen) for the ball,” Fields said. “That’s the only competition we have, just getting the ball. Once whoever gets selected, we’re all rooting for each other like we’re out there.”

Playing in front of an announced crowd of 7,460 fans, Texas Tech loaded the bases in the third inning on three straight walks and then took a 3-0 lead on two run-scoring singles. Texas starter Bryce Elder entered the game having issued just seven walks in 23 1/3 innings. None of his first four starts featured a two-walk inning.

Elder got Texas through the next two innings before Longhorn coach David Pierce went to his bullpen. Madden registered a strikeout and two infield outs over his 15-pitch inning. Fields then retired the nine batters he saw.

“They’re becoming lights-out guys,” Pierce said of his bullpen. “There’s nothing guaranteed, they’ve got to make quality pitches… Every now and then you may get popped but right now, I like what we see.”

Fields struck out the side in the final frame and he now boasts a 1.46 ERA. Opposing batters are hitting .051 against the sophomore right-hander. Fields has registered two lengthy saves this year, and he was the winning pitcher in last week’s 4-0 win at Stanford.

On Friday, Fields also cashed in on an opportunity to show that an appearance in a 9-0 loss to Stanford on March 10 was an outlier. Playing in wet conditions, Fields threw only eight pitches but had two wild pitches that scored runs.

“Sunday, that wasn’t me,” Fields said. “I didn’t blame myself for none of that. If you watched the game, you saw what it was. I left it at that.”

Texas Tech starter Erikson Lanning faced the minimum amount of batters over Friday’s first four frames. The Longhorns, though, plated runs on sacrifice flyouts in the fifth and sixth innings. UT then took its 4-3 lead in the sixth session when a two-out, two-run error was committed by Red Raider third baseman Josh Jung.

“Our whole mindset today was grind it out,” Zubia said. “It was just really awesome to see us keep on grinding (and) not get down on ourselves, being down 3-0.”

It’s been one year since we lost a legend. Thanks for everything, Augie. #RIPAG16 🤘 pic.twitter.com/qEte8Qz0AU

Around the bases: Before Friday’s game, Texas played a video that observed the one-year anniversary of former coach Augie Garrido’s death. …  Zubia was the only player on either team who scored and drove in a run. … Cameron Warren drove in two runs and collected three of Texas Tech’s seven hits. … After missing UT’s last three games with a groin injury, senior catcher Michael McCann returned and threw out a potential base-stealer.