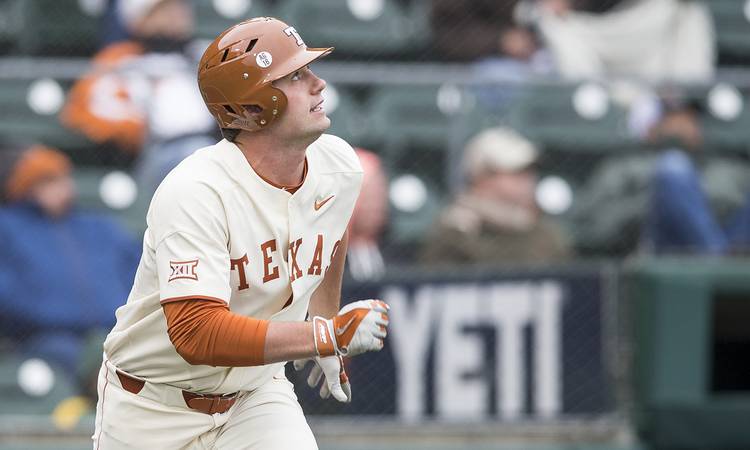 With a record-setting crowd on hand, Texas had the stage set for another dramatic finish Saturday.

Alas, Texas Tech did not join the likes of Louisiana-Lafayette, Texas State, TCU and LSU, four teams against which Texas has recorded walk-off wins over the past two seasons.  A fly ball to left field instead left the bases loaded at the end of UT’s 3-0 loss to Texas Tech at UFCU Disch-Falk Field.

“For right now we have to shrug it off because we can’t really focus on this loss, but it’s extremely frustrating,” senior catcher Michael McCann said.

Over Saturday’s first seven innings — all of which were scoreless — starters Blair Henley and Caleb Kilian limited the two teams’ offenses to four hits. Texas Tech was averaging 8.7 runs, but Henley stranded three Red Raiders in scoring position. Texas, scoring 6.1 runs per game, got one runner to second base against Kilian.

Texas Tech finally broke through during an eighth inning that Henley opened with two walks. After Texas Tech executed a double steal against reliever Cole Quintanilla, the Red Raiders recorded an out but were still positioned to strike.

On a 2-2 offering from Quintanilla, cleanup hitter Brian Klein flied out to Austin Todd in right field. Todd got off a good throw to home plate, but he was unable to gun down Gabe Holt. Todd has two outfield assists this year; Holt is Texas Tech’s leadoff hitter and has 11 stolen bases.

Later in the inning, Cody Masters contributed a two-run single.

Said McCann: “We need to get the bats going because I thought Blair did a fantastic job today.”

Saturday’s setback was the third time Texas had been one-hit this season. Three ninth-inning walks by Texas Tech closer Clayton Beeter, though, still gave UT a chance to rally. But Todd looked at a third strike with two runners on for the second out. After cleanup hitter Zach Zubia was walked, Ryan Reynolds flied out to end the game.

The flyout gave Kilian his first victory of the year. He had four strikeouts and two walks over seven innings. The right-hander entered the game with a 9.19 ERA, a statistic not lost on Texas coach David Pierce.

“I thought Caleb Kilian was very good, and that’s unfortunate because he’s been struggling and we allowed him to come in here and get well today. The kid pitched well,” Pierce said. “One of those games that we just couldn’t scratch anything across; we just didn’t have any timely hits. Tip our hats to them and get ready for tomorrow.”

Around the bases: Pierce said Texas will start Coy Cobb (0-2, 4.00 ERA) in the series finale Sunday afternoon. He will be opposed by fellow freshman Mason Montgomery (2-0, 5.02). … Zach Zubia’s second-inning single was UT’s only hit. … Texas did not commit an error Saturday, and the Longhorns have gone three straight games without a defensive mistake. Over its first 18 games, Texas had only two errorless outings. … Kilian was the winning pitcher in Texas Tech’s 16-5 beating of UT in 2018.

What a relief: Bullpen steps up in UT’s conference opener against Texas Tech