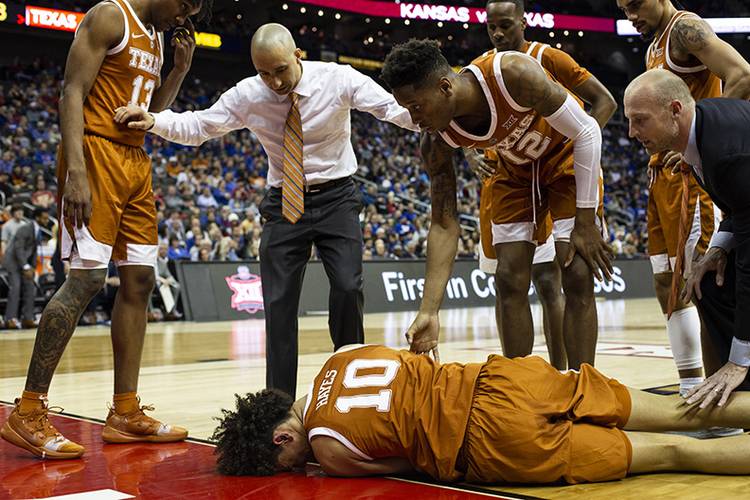 Texas freshman Jaxson Hayes had an MRI on his left knee injury suffered at the Big 12 tournament and will need further evaluation, coach Shaka Smart said.

The 6-foot-11 forward will not play Tuesday in the NIT opener against South Dakota State, and his career at UT may be over.

Hayes’ knee accidentally collided with a Kansas player’s knee during Thursday’s game. He needed help just to walk off the court. Hayes is widely considered a potential first-round draft pick, possibly even a NBA lottery pick, and now faces the decision of going pro or coming back to school.

“I don’t want to speculate until he sees the specialist, but I don’t think it’s going to be something that’s long, long term,” Smart said Sunday night. “I do think unfortunately it’s probably going to keep him out of our upcoming games.

“But from what we know so far, it’s not a worse-case scenario, and the MRI showed that.”

Smart said as far as Hayes’ rehabilitation is concerned “there won’t be any type of rushing him.” Hayes finished the season averaging 10 points, five rebounds and 2.2 blocks per game and was named the Big 12 freshman of the year.

Prior to the Big 12 tournament, Hayes scoffed at questions about his future.

“If I want to stay another year, I can stay. If I want to go, I’ll go,” Hayes said. “I’m just going to take time to think about it, because my family doesn’t need the money. We could use the money, obviously, but it’s not like we need it.”

Smart praised Hayes’ family on Sunday. His father, Jonathan, was an All-American football player at Iowa, a 12-year NFL pro and then a long-time NFL assistant coach. Hayes’ mother, Kristi, was considered one of the best women’s basketball players in Iowa history.

On Hayes’ decision, Smart said, “That’s up to him and his family. He has as good of a support system, in terms of family, as I’ve ever seen. I’ve been around some very, very high-level families and theirs ranks up there. No disrespect to my family, but I wish I had grown up in his.

“With that being said, he will have all the support he needs to make a good decision,” Smart added. “As we’ve told him and his family, we’re behind him 1,000 percent, like we always would be. We’re here as a resource. I don’t get the sense from them that they’re in a huge rush to make a decision.”

If Hayes did go pro, he’d likely be the third-straight first-round pick to come out of UT’s program. Jarrett Allen (2017) and Mo Bamba (2018) were both first-round picks after going through the NBA evaluation process.

RELATED: Golden: March Madness equals sadness in Austin but what of Shaka?

NCAAs was ‘a long shot’ but Texas now turns the page to NIT, South Dakota State