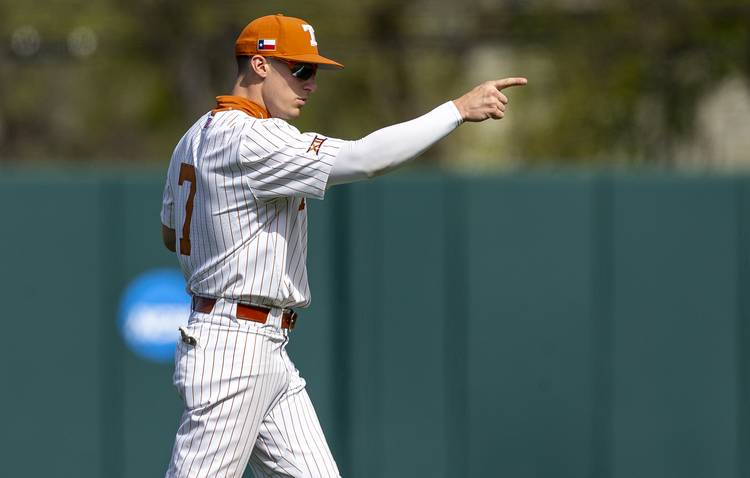 Even though he ended the weekend on a high note, don’t expect Texas senior Masen Hibbeler to start looking at the video board now.

During every at-bat, one of the screens at UFCU Disch-Falk Field displays a batter’s picture, his season statistics and accomplishments for that day. But when you’re hitting around .200, you tend to keep your focus on the field. Even after he collected two hits on Sunday, Hibbeler conceded that “I don’t like to look at it. It’s still not high.”

Those hits, though, were two of this season’s biggest for Texas. Hibbeler was tied to all four of UT’s runs in the 4-3 win over Texas Tech. The victory was UT’s second in this weekend’s conference-opening series with the Red Raiders, who claimed a 3-0 conquest on Saturday. Texas was the Big 12’s regular-season champion in 2018, but the Red Raiders were picked by the conference coaches to win this year’s title.

“I’m just glad to get out of here 2-1 against Tech,” freshman pitcher Kolby Kubichek said.

Limited to one hit in its shutout loss, Texas was no-hit by Leander native Mason Montgomery over the first five innings of Sunday’s showdown. Austin Todd led off the sixth session with a single, and Eric Kennedy got aboard with a bunt. After those two runners were moved into scoring position with two outs, Hibbeler drove a two-run single into center field.

Two innings later, a Hibbeler single brought home another run for Texas. He also scored in the sixth inning when Texas Tech committed a two-out error while trying to throw out Hibbeler at third base on a double steal.

Hibbeler entered the game with a .207 batting average, and that climbed to .230 by the end of Sunday’s action. In the week’s four games, Hibbeler was 7-for-12 with four runs and five RBIs. Since he wasn’t striking out much during his early struggles, Hibbeler made some adjustments and felt like the hits would come.

“It was humbling,” Hibbeler said. “I didn’t really have to deal with that much in college. I’m just trying to simplify now and roll with it.”

Texas coach David Pierce started Hibbeler at shortstop for a fifth straight game because he has been a better defender than freshman Bryce Reagan. On Sunday, Hibbeler had three defensive assists. He was also the middle man on a Kennedy throw from left field that caught a Red Raider at the plate.

Since Hibbeler is versatile enough to play second base, Pierce assessed that his middle infield is still in flux. However, Pierce added that “if you ask me who’s the starting shortstop today, it’s Masen Hibbeler.”

Texas threw seven pitchers at Texas Tech on Sunday. Freshman starter Coy Cobb lasted 2-and-a-third innings and reliever Ty Madden was pulled with a shoulder injury after eight pitches. Freshman Mason Bryant, who got out of a bases-loaded jam in the sixth inning, earned the first win of his collegiate career. Kubichek retired the final three batters after Texas Tech slugger Josh Jung hit a two-run homer off Matt Whelan in the ninth inning.

“I just mixed it together today,” Pierce said. “It’s not the way you draw it up, but at the same time, you figure out how to win.”

Around the bases:  Texas announced a crowd of 7,390 for Sunday’s game. The 22,729 fans who made their way to Disch-Falk were a school-record for a three-game series. … Additionally, Jung contributed an RBI-double in the fifth. … Ranked 243rd nationally in fielding percentage ahead of this series, Texas did not commit an error all weekend. … Pierce was not ready to name a starter for the opener of UT’s two-game non-conference series with Arkansas on Tuesday.