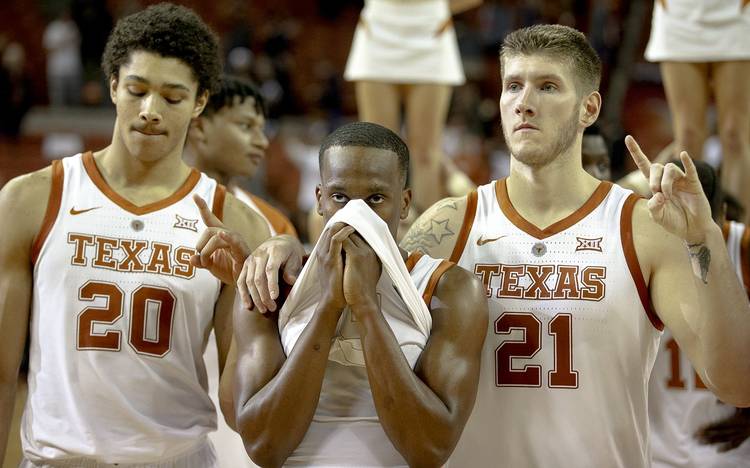 Texas guard Matt Coleman III (2) covers his face while standing for the playing of The Eyes of Texas following Texas' 54-53 loss to Virginia Commonwealth in an NCAA college basketball game in Austin, Texas, on Wednesday, Dec. 5, 2018. [NICK WAGNER/AMERICAN-STATESMAN]

There was little surprise and virtually no outrage in burnt-orange circles on Sunday when Texas was left out of the NCAA Tournament.

The Longhorns were 16-16 this season. The selection committee has never given a .500 team an at-large invitation for the field of 68. No reason to start now, either.

Texas coach Shaka Smart said he watched the selection show and “obviously there was a hope there.” But after last Thursday’s loss to Kansas in the Big 12 tournament “it was a long shot.”

Texas now hosts South Dakota State at 8 p.m. Tuesday in the first round of the NIT, a second-tier postseason tournament featuring 32 teams and played largely out of the national spotlight.

Tickets are $12 or $14, and the Erwin Center’s upper portions will be closed. The game will be broadcast on ESPN.

The Jackrabbits (24-8) won the Summit League championship this season and rank sixth nationally in points per game (84.9). Dynamite senior Mike Daum also ranks sixth among all Division I players from 1985 with 3,042 career points.

If Texas wins, the team would advance to the second round and face either Xavier or Toledo. TCU also landed in the NIT after missing out on the NCAAs. TCU opens against Sam Houston State.

“At points during the season and throughout the season, we expected to be in there,” Smart said. “The way the season finished for us is what hurt us in terms of making the NCAA Tournament.

“What was going through my head is that it’s my job as a leader to set the right example for our guys and talk about turning the page, embracing the right attitude and next challenge,” the coach added. “That has to start with me. That is the biggest directive that I’ve given myself moving forward.”

It’s the second time in coach Shaka Smart’s four seasons the Longhorns did not make the NCAAs. Former coach Rick Barnes made the NCAAs 16 times in 17 years.

The Longhorns will also be without freshman forward Jaxson Hayes, who suffered a knee injury against Kansas. Hayes had a MRI but will seek another evaluation. Smart conceded that Hayes’ season is likely over, and the Big 12 freshman of the year now must decided if he’ll return to Texas or go pro.

“Our biggest key with him is long term, so there won’t be any type of rushing him,” Smart said Sunday night.

The rest of the Horns must prepare for one of the best shooting, most efficient offensive teams in Division I basketball. The 6-foot-9 Daum will be a handful for UT big men Dylan Osetkowski, Jericho Sims and Royce Hamm Jr. But the Jackrabbits also have potent scorers in the 6-foot-2 David Jenkins and 6-foot-6 Skyler Flatten.

“It just so happens we’re playing one of the best shooting teams in the country and a team that plays four perimeter guys,” Smart said, “really five perimeter guys with Daum because he can shoot the ball so well from outside as well.”

All it takes is three victories to reach the NIT semifinals in New York. This is the first time Texas has played in the NIT since 1986. The Longhorns won the whole thing in 1978.

NIT officials use the tournament as a testing ground for possible rule changes. For example, the 3-point line will be extended to the same length as the FIBA international line of 22 feet, 1 3/4 inches. The lane is also four feet wider to force better interior spacing.

But Smart said the most important key is mental preparation. If any Longhorns is upset about not making the NCAAs, they better get ready for the Jackrabbits.

“It’s interesting,” Smart said, “because the key obviously right now for our game on Tuesday is to turn the page quickly.”

RELATED: Golden: March Madness equals sadness in Austin but what of Shaka?