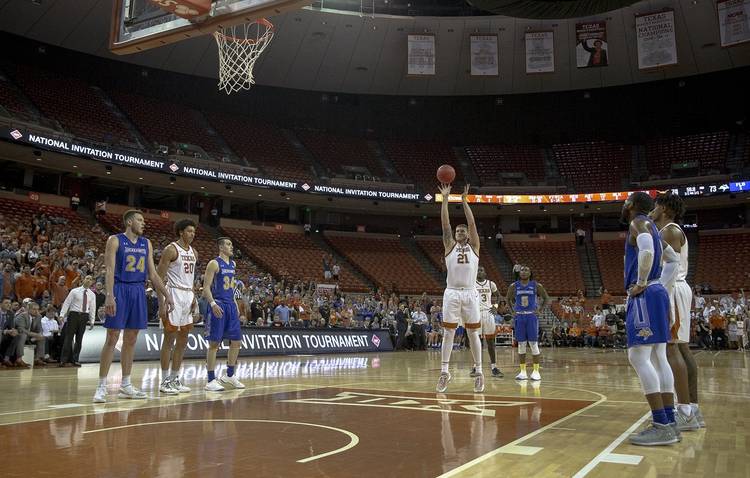 Hope springs eternal. That’s until someone closes the shut-off valve.

Last week at the Big 12 tournament, a reporter told Texas senior Dylan Osetkowski that no .500 team had ever received an at-large bid to the NCAA Tournament. “Once I heard that, it was like (expletive), man,” he said.

Eli Mitrou-Long watched the NCAA selection show in his dorm room while FaceTiming his brother. “As soon as they said Texas was out, I just turned it off,” Mitrou-Long said.

The NIT is college basketball’s equivalent of a mid-December bowl game. The winner is usually the team that embraces the experience and actually cares — even if the fans don’t.

Texas came racing out of the gates Tuesday against South Dakota State in the NIT opener and built up a 19-point lead. With this group, which blew 19-point leads against Michigan State and Baylor, it was merely the latest hold-my-beer moment.

Once again, Texas gave up that big lead, but a career performance by Osetkowski and some clutch free throws in the final minute secured a 79-73 win. If this was the only UT game you saw all season, it encapsulated everything that’s happened the last five months.

Still, Osetkowski finished with a career-high 26 points to offset the 25 points from SDSU’s Mike Daum as the Longhorns improved to 17-16. It was quite possibly Osetkowski’s best offensive game ever in burnt orange.

“It’s crazy. He looked a little bit like Kevin Love today,” freshman Courtney Ramey said. “I called him that earlier. I said you got the cut, looking like Kevin. Keep playing like it.”

Not that many saw it live, though. For $12, you could sit behind the basket. For $14, you could sit center court. The official attendance was 1,739. Over on the east side of Interstate 35, a total of 6,208 flocked to watch the UT baseball game against Arkansas.

“As much as we were on pins and needles thinking about the tournament, I knew we put ourselves in a tough place to have the committee pick us with the 16 losses,” Osetkowski said. “But we’re playing, that’s all we can say. We’re still playing.”

Granted, it was the NIT and not the NCAAs, but it was Texas coach Shaka Smart’s first postseason tournament win in four seasons. UT will next face the Toledo-Xavier winner; those two teams play Wednesday. The second-round game could be Saturday or Sunday in Austin. No official word as of yet.

With two more wins, Texas could advance to New York for the NIT’s version of the Final Four. The coming days feel like a gut-check moment for everyone affiliated with Texas basketball.

“For me, I’ve got pride. You can check my guts. I’m going to work my butt off, man,” Smart said. “I’m going to do what I feel like is the best thing for our team, regardless of the circumstances or what anyone else says. I’ve got to focus on what I can control.”

For the first time, Smart acknowledged he’s on a hot seat, although UT administrative sources have told the American-Statesman that Smart will not be fired this offseason. He’s now 67-66 in four seasons with the Horns.

This bunch would’ve cruised into the NCAAs with torrid shooting like it showed early against the Jackrabbits (24-9). Osetkowski, Kerwin Roach II and Ramey all took turns hitting 3-pointers as the Horns built up a 19-0 lead early.

Maybe Texas felt like a 3-point shootout was the only option without 6-foot-11 forward Jaxson Hayes. The Big 12 freshman of the year showed up on crutches and will continue to seek rest and counsel about the knee injury suffered last week.

Without Hayes, Texas lost the battle on the glass by four. The Horns wound up shooting 38 3-pointers, the second-highest total under Smart. At least Texas hit 15, coming up three shy of tying the school record set in 1997.

The NIT even uses a longer 3-point line, one that stretches 22 feet, 1 3/4 inches at the top of the key. On some of Ramey’s attempts, he stepped back even farther. The freshman hit four treys all told and tallied up 13 points.

“That’s crazy,” Ramey said. “My coach said this seems like the Courtney range. I was like, ‘Nah, this seems a little bit too far.’ But if I’m open, I’m shooting it.”

Finally, Roach turned it over and Daum ended up swinging from the rim after a dunk. SDSU had a three-point lead with 8:12 remaining. But that turned out to be the last points the visitors would get over the next 4 minutes, 59 seconds.

Texas went back up by three on Osetkowski’s hook shot in the lane, and Matt Coleman III followed with his own jumper. Texas closed it out at the free-throw line, prompting joyous shouts from the dozens in attendance.

“As long as we’re going to continue playing basketball,” Osetkowski said, “we might as well keep winning games and try to make a run.”