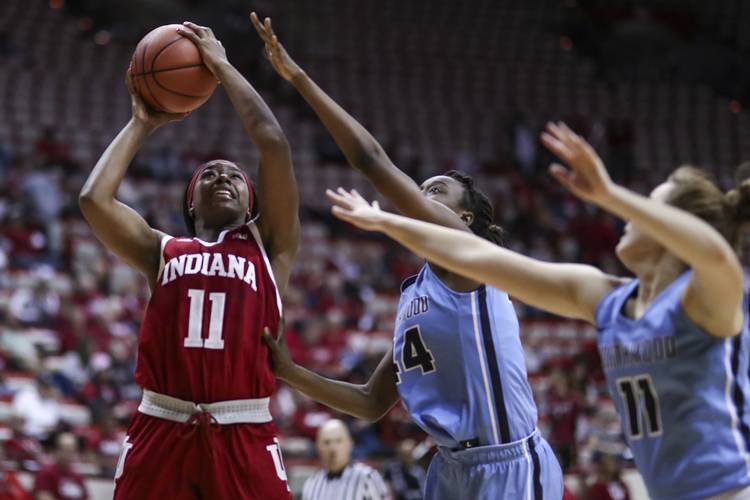 Teri Moren was flipping through TV channels recently when she stumbled upon a Texas women’s basketball game.

Of course, it wasn’t a must-see for the Indiana women’s coach; at the time she had no idea that her team would end up facing the Longhorns in the first round of the NCAA Tournament. The two teams meet Friday in Eugene, Ore.

Moren took a few mental notes, but there was something about Texas that definitely stood out.

“Joyner Holmes is going to be a beast to deal with,” Moren said.

“If you look at her, you’d think she was just a post player, but if you look closer you’ll see a post/forward/guard,” Moren continued. “She can face up and that’s always a concern when we go into a game with the size problem we have.”

If seventh-seeded Texas (23-9) has any advantage over 10th-seeded Indiana (20-12), it will its height edge with 6-3 Holmes, 6-4 post Jatarie White and 6-5 post Charli Collier. By contrast, the Hoosier’s tallest starters are 6-2 forward Kym Royster and 6-foot forward Brenna Wise.

Texas ranks fourth in the country, out of 349 teams, in rebounding, averaging 10.4 more boards a game than its opponents. The Horns have won the rebounding battle in 28 of 32 games this season and 117 of their last 137.

This marks the sixth straight season the Longhorns have earned a tournament bid under seventh-year coach Karen Aston. Texas has not lost a first-round game during that stretch, but Indiana, the 10th-place team from the Big Ten, is not traveling to Eugene to observe its nature trails.

“You’ve got more than 300 teams competing (in women’s basketball) and only 64 make it,” Wise said. “So this is a special 64 and we’re all aiming for the same end game.”

Indiana, which played in the WNIT the past two years, must have impressed the NCAA selection committee with a few quality wins. The Hoosiers defeated five teams that currently rank in the top 50 of the Ratings Percentage Index that the committee uses to select the 64-team field — No. 7 Iowa, No. 35 UCLA, No. 41 South Dakota, No. 43 Michigan State and No. 46 Michigan.

Michigan is the only common opponent for Texas and Indiana. Texas defeated the Wolverines 69-52 in the Gulf Coast Showcase on Nov. 24  in Fort Myers, Fla., behind White’s 15 points and 7 rebounds; Indiana split their Big Ten season series against the Wolverines, winning 70-60 on Jan. 24 at home and losing 67-58 on Feb. 14 in Ann Arbor.

Indiana’s best player is junior guard Ali Patberg, whose basketball journey has been filled with highs and lows. A graduate of North High in Columbus, Ind., she was named a McDonald’s All-American before enrolling at Notre Dame.

Her freshman season was wiped out, though, when she tore the ACL in her right knee one week before the season. As a sophomore, she played in 22 games for the Fighting Irish, averaging 7.7 points per appearance. She transferred to Indiana after that season.

After sitting out the 2017-18 season per NCAA transfer rules, Patberg caught fire this season. She scored 16 points in her Hoosiers debut against Wisconsin-Milwaukee and had a season-high 30 points in a November game against Wake Forest. When Iowa eliminated Indiana 70-61 from the Big Ten tournament two weeks ago, she scored 25.

“Even though she’s a junior, she’s more like a freshman because she didn’t have many minutes behind her (when she enrolled at Indiana),” Moren said. “It was a tall task to lead our team, but she stepped up in a big way.”

Patberg shares the backcourt with 5-10 sophomore guard Bendu Yeaney, whose trip to Oregon is a homecoming. She was a four-year varsity player at St. Mary’s Academy in Portland — 110 miles north of Eugene — where she averaged 28.3 points, 13.1 rebounds, 3.6 assists and 4.6 steals as a senior.

“My phone’s been buzzing ever since the brackets were leaked early (on Monday),” Yeaney said. “It’s going to be great to get back to my roots.”

The Texas-Indiana winner advances to play Friday’s Oregon-Portland State winner on Sunday. For TV purposes, game time for the Sunday game has not been determined.

Down early, No. 9 Texas rallies to win a ‘character check’ and snap a losing streak to No. 11 Arkansas