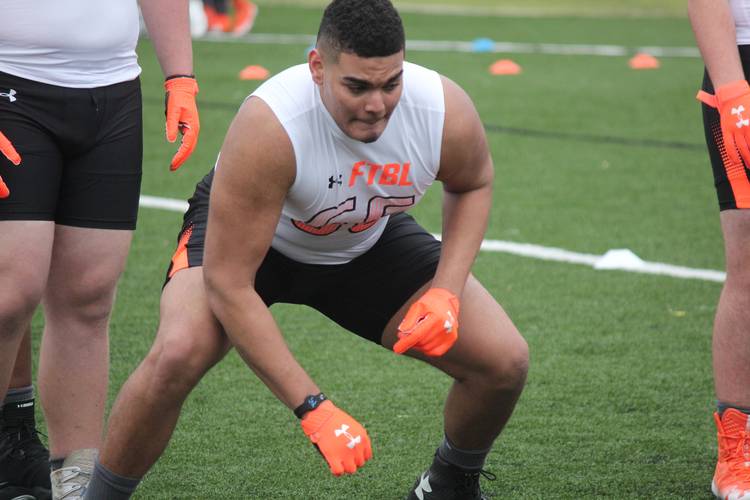 Richmond Foster offensive tackle Reuben Fatheree is among the top players in the 2021 class. (Mike Craven)

Offensive linemen highlight the 2021 cycle inside the state with six of the top seven spots on the Next 25 list. The top-ranked player in the group is five-star tackle Donovan Jackson of Houston Bellaire Episcopal. The 6-4, 308-pound star is a refined blocker who excels at pass and run blocking. He earned the top spot with a strong sophomore season and dominant performances at elite camps.

No. 2 on the list is Fort Worth All Saints tackle Tommy Brockermeyer, the son of former Texas standout Blake Brockermeyer. Tommy is the top prospect in the DFW area and already holds 12 offers. He’s a long, athletic lineman with an excellent grasp of the position thanks to the guidance of his father.

Both Jackson and Brockermeyer play TAPPS-level football, continuing a trend of more elite prospects participating outside of the public school system. The list’s top quarterback, Preston Stone, is also a private schooler.

A trio of Houston-area linemen round out the top five. Reuben Fatheree of Richmond Foster is the best looking prospect in the cycle. He checks in at No. 3 on the Next 25. The 6-8, 300-pound four-star prospect already holds 23 offers because of his combination of huge upside and athletic frame from years as an elite basketball player. Fatheree knows his upside is on the football field and is only now scratching the surface of his massive potential.

A pair of teammates take the fourth and fifth spot, respectfully. Katy Taylor is becoming an offensive line factory with Andrew Coker signing with TCU in 2019 and now with two of the state’s top prospects in Bryce Foster and Hayden Conner. Foster is the best interior line prospect in the state if Jackson remains at Texas. Conner is a tough, physical tackle with the ability to play guard because of his physicality.

Duncanville tackle Savion Byrd is ranked seventh. The 6-5, 265-pound prospect might possess the most upside in the group. He’s agile, long and physical at the point of attack. He’s excelled against elite competition at camps this offseason and anchors the offensive line at a premier Class 6A program.

The top-rated non offensive lineman is Galena Park North Shore wide receiver Shadrach Banks, who won the offensive MVP award for North Shore after their victory over Duncanville in the Class 6A Division I state championship game. Banks is an incredible athlete with great hands and footwork. He’s a smooth route-runner who glides away from defenders after the catch. Fellow wide receiver JoJo Earle, a slot receiver from Aledo, is 10th.

Mesquite Horn inside linebacker Kendrick Blackshire is the lone defender inside the top 10. Offensive players tend to blossom faster at the prep level, but Blackshire is a legit star at the middle linebacker position with the size, speed and physicality that college coaches covet on the recruiting trail.

Two players from the Austin area made the list with LBJ cornerback Latrell McCutchin and Hutto defensive end Landyn Watson ranking 13th and 14th, respectfully. McCutchin is a long, athletic cornerback, while Watson is a terror off the edge with the ability to play defensive end or outside linebacker in college.

Down early, No. 9 Texas rallies to win a ‘character check’ and snap a losing streak to No. 11 Arkansas