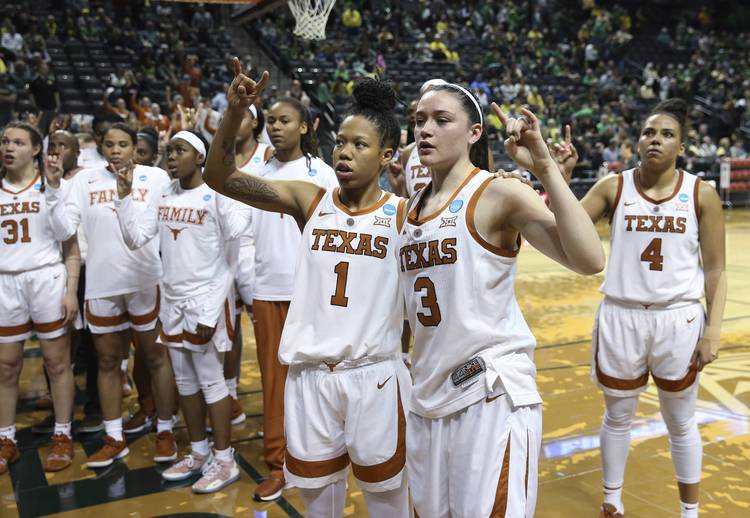 EUGENE, Ore. — In the corner of the Texas locker room, Charli Collier reflected on a season that ended way too early and a future that should include a return to glory.

There was no joy for a team that most would say underachieved this year. Whether it came down to turnovers, inconsistent play, injuries or lack of cohesion, the season is over. Indiana rallied in the second half to pull out a 69-65 victory over the Longhorns in the first round of the NCAA women’s basketball tournament Friday night at Matthew Knight Arena.

Collier was one of the few bright spots for Texas. She had 10 rebounds in just 15 minutes, showing glimpses of potential greatness. Seniors Danni Williams and Jatarie White combined for 28 points in their final game in burnt orange and white.

“I feel like we’re going to be stronger next year,” the 6-5 freshman said. “We’re going to have Lashann (Higgs) and Sedona (Prince) back (from injuries). Our freshman will be good. … Next year should be my bread and butter and I should be an enforcer in the paint.”

Texas finished the season 23-10. Like so many games that slipped away this season, Texas had no business losing. The taller, stronger Horns amassed a 46-25 rebounding edge. Texas had a 25-7 edge in second-chance points. Texas had momentum, too, holding a 37-29 halftime lead at halftime before watching it all slip away in the third quarter.

“This game was a reflection of our entire year,” Karen Aston said. “There were times that we were very, very good and times we didn’t play very well.”

Indiana outscored Texas 23-12 in the period and held on late for the victory. It was fitting that UT’s bid to tie or win the game in the closing seconds ended with a turnover. Trailing 67-65, Sug Sutton was accidentally tripped by Collier while retrieving a pass. On the ground, the junior point guard helplessly watched the ball go out of bounds.

Indiana guard Ali Patberg, fouled on the ensuring possession, sank too free throws to end the scoring for both teams. Sutton offered no excuses for losing.

“They just played harder than we did down the stretch,” she said. “We didn’t play defense the way we’re supposed to coming out of the first half and (Indiana) took the lead and ran with it.”

White said the Longhorns were “too complacent” after halftime. “We didn’t come out with the mentality to keep our lead and keep pushing each other,” the 6-4 post said.

UT’s yearly turnover problem is inexplicable. The Horns ranked 195th (out of 349 teams) in the nation in turnovers this season. In the last seven years, Texas has never finished better than 118th in that category.

Aston agreed with Collier, saying Texas should have a better team next season. On Friday, though, it was too early to turn the page on a season that ended in disappointment.

“That’s what I meant by this game being the story of our season,” she said. “There are times we have lapses where we seem to relax and lose focus. You start to give the other team confidence and then you have a ball game.”

Something to ponder until the Longhorns lace up their sneakers come November.