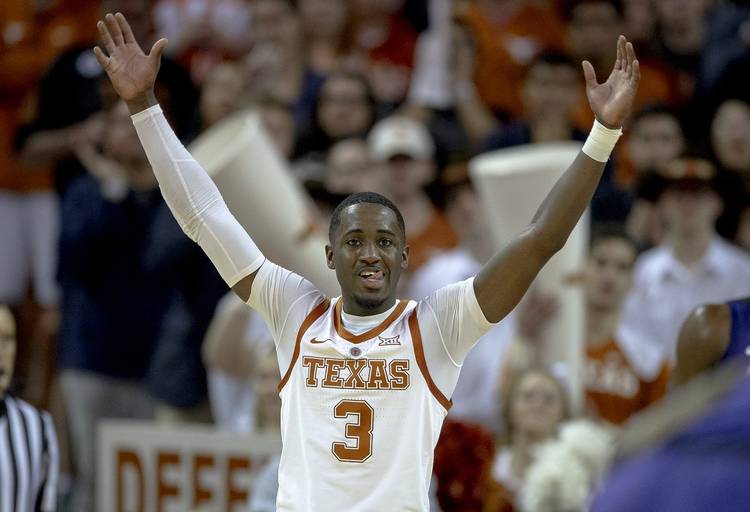 To start the day with some optimism, Texas forward Jaxson Hayes saw another specialist on Friday about his left knee injury and it was decided there was no structural damage.

Hayes, the Big 12 freshman of the year, does not need surgery. “We are expecting him to make a full recovery in a matter of weeks,” the university said in a statement.

The NIT championship game is scheduled for April 4 at Madison Square Garden. Hayes may not appear in a competitive game again until October when the NBA season begins, if the projected NBA lottery pick does indeed jump into the draft.

Texas coach Shaka Smart may already be thinking about next season, too. Hayes is likely to be gone, as will seniors Dylan Osetkowski and Kerwin Roach II. The Longhorns (17-16) could go all in with a lineup of youngsters that will definitely be back in burnt orange next fall.

“We don’t wish him to be out, but it’s just another one of those moments where I have to step up and fill in,” sophomore forward Jericho Sims said of Hayes.

Xavier, UT’s second-round NIT opponent, has a team that skews older. The Musketeers (19-15) have five players averaging in double figures and play like a team that’s been through some major Big East battles. It’s an intriguing Sunday afternoon matchup at the Erwin Center.

Look close enough at Texas, and the contours of next season’s lineup is already taking shape.

Freshman Courtney Ramey, a dynamic guard always barreling forward, could be the team leader next season. He certainly is playing well enough to bump sophomore Matt Coleman III out of the starting spot.

Ramey had four 3-pointers in the first-round win over South Dakota State and four assists in 36 minutes. Coleman had no assists in 17 minutes as he was plagued by foul problems. He’s had a total of four assists in the last four games, a disastrous total for a starting point guard.

Ramey is, in coaching parlance, a dog. He’s unafraid to pull up and shoot from the county line and never hangs his head over mistakes. After tough losses this season, he seemed to always be the first to utter, “We’re moving on.”

“Courtney, when he’s in a good place, nothing is clouding his name or as I say to him, that nothing’s bothering him,” Smart said. “That competitive spirit is terrific.”

Ramey and Eli Mitrou-Long should make an interesting backcourt combination next season. Mitrou-Long got erratic playing time this year, and his production was inconsistent as a result. His two best games were a 16-point outburst against Grand Canyon and 13 points against Iowa State. But he disappeared for long stretches against upper-tier Big 12 guards.

Shooting guard Jase Febres must show that he’s capable of doing something other than shoot 3-pointers. He’s the ultimate hot-or-cold player. He hit 20 3-pointers in a three-game stretch in February. But if he’s not hitting, he’s totally ineffective. The sophomore does not facilitate scoring (0.4 assists) and doesn’t help much on the glass (2.8 rebounds).

Sims was the player coaches thought would shine this year. Instead, he wilted. The 6-9 sophomore eventually lost his starting job to Hayes, had a midseason foot injury and lost time in the rotation down the stretch.

Sophomore Royce Hamm Jr. and freshman Kamaka Hepa may be the two biggest mysteries on the roster.

Hamm, once a long-range shooter in high school, struggled to learn his specific role inside and didn’t play half the season. When he did play, he always made at least one fantastic play. Smart said Hamm’s biggest issue was consistency.

Hepa, one of the best players in Alaska history, lost his confidence and needed a longer transition than some thought. He played off and on during Big 12 play.

Nobody got to see freshman Brock Cunningham of Westlake. He redshirted this season.

The wildcard remains Andrew Jones, the 6-4 junior who was diagnosed with leukemia more than one year ago. Jones still has two major treatments remaining, and his long-term health diagnosis is well on the upswing. His basketball future is still unclear, though.

So the Longhorns project to have a similar roster next season, only some of the names will change. Perhaps a NIT championship is what spurs this group to find more confidence and consistency.

As Smart said, “This can be a springboard for us.”

‘It’s a pitchers’ field for sure’: Hitting homers at McCombs Field a tall task for Texas and its guests