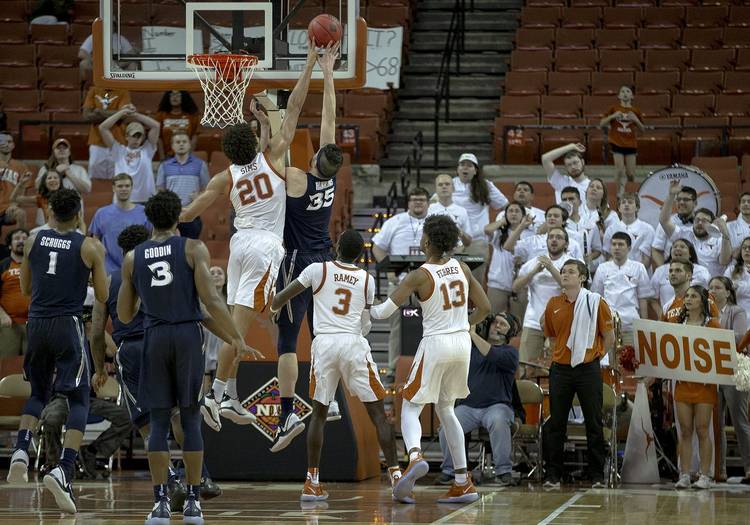 Perhaps there will come a day when Texas fans look back on last Tuesday’s NIT opener as the comedic low point in recent UT men’s basketball history. Only 1,591 diehards can brag about it, though.

Hey, I was there for South Dakota State!

Photos of the Erwin Center’s vast emptiness must’ve sparked some serious soul-searching within burnt-orange circles. The crowd doubled in size Sunday for the second-round matchup against Xavier. The Longhorns themselves doubled their effort, too.

An announced collection of 3,204 people were on their feet going wild when UT’s Jericho Sims blocked a potential game-winning shot in regulation. And they exhaled in overtime when Naji Marshall missed a short jumper off an inbound play with 1.3 seconds left.

The Longhorns captured a hard-fought 78-76 victory in which they showed some of the best heart and hustle seen all season.

“I love it, man. We didn’t have a sold-out crowd, but the people that we did have had a major impact for cheering us on,” guard Jase Febres said. “I want to thank the crowd, they’re a part of that win, too.”

The atmosphere wasn’t lost on the head coach. “Let’s be honest, home-court advantage goes a long way in college basketball,” UT’s Shaka Smart said. “Today, we had one.”

Texas (18-16) next faces the Norfolk State-Colorado winner in the quarterfinals at 8 p.m. Wednesday. The winner of that game advances to Madison Square Garden for the NIT semifinals. Tickets will once again be $12 and $14.

But perhaps more important, Texas has guaranteed itself a winning season. Four players finished in double figures, with senior Kerwin Roach II leading the way with 21 points, eight rebounds and six assists. Febres and Courtney Ramey both had 17 points, and Sims added 11.

“We can still finish the season claiming ourselves as NIT champions, which wasn’t our goal,” Ramey said. “We wanted to be NCAA champions, but hey, that’s the next best thing in our eyes. So we need to keep winning.”

Xavier coaches and players must’ve seen those photos from last Tuesday night and laughed. Surely they thought this would be easy. After all, another Big East team, Providence, came to Austin in December and left with a 71-65 win.

Roach noted how Tyrique Jones (22 points, 11 rebounds) and Marshall (19 points) tried to bully the Horns. “There were a lot of times we were getting in altercations on the floor,” Roach said. “We just stood up to them, played our game and kept attacking.”

The Musketeers (19-16) probably thought they were well on their way after a 13-3 run to open the second half. But the Horns settled down and got a 3-pointer from Febres and another from Matt Coleman III, who squared up and drilled his shot just before the shot clock expired.

From there, Texas turned it on.

Ramey was just sensational, forcing the action and showing terrific court awareness. He also picked up a technical foul with an Xavier player when the two refused to back down to each other. “I was fired up before that,” Ramey said, “but I guess that gave me an extra boost.”

Sims was reaching over players, tapping loose balls to teammates. Several Horns showed excellent body control jumping out of bounds to save loose balls. Guys were diving on the floor in ways Smart had only dreamed about at times this season.

Still, Xavier had a chance to win at the end of regulation. Quentin Goodin got Roach up in the air and drew a foul as Texas led 70-69. Goodin made the first. Then, he missed the second and Xavier’s Zach Hankins got around Sims for the rebound.

Hankins went up for the potential game-winning bucket. Sims went up into the air and made perhaps the biggest block of his UT career.

“It’s not something I wanted to happen,” Sims said of getting beat on the rebound, “but it’s a good thing I can get up off my feet quick enough and get that one.”

In the extra period, Roach could’ve put it away with free throws. But he missed 3-of-4 in the final 20 seconds. Roach appeared to save the day with a critical rebound with 1.3 seconds left. But officials ruled it a jump ball, and Xavier kept possession.

On the final play, Marshall was the go-to man, and UT’s Dylan Osetkowski was all over him. Once Marshall’s shot missed, the Horns felt renewed.

“NIT, March Madness, regardless if you’re still playing in March, every single game you go out there, if you’re a competitor, you’re going to want to win,” Febres said.

Smart was an assistant on a Clemson team that reached the 2007 NIT championship. OK, so maybe it’s not the NCAAs. But these Horns can still win a championship, so that’s something.

“We’ve got one more game to make it to New York,” Smart said, “and the goal is to win the whole thing.”

‘It’s a pitchers’ field for sure’: Hitting homers at McCombs Field a tall task for Texas and its guests