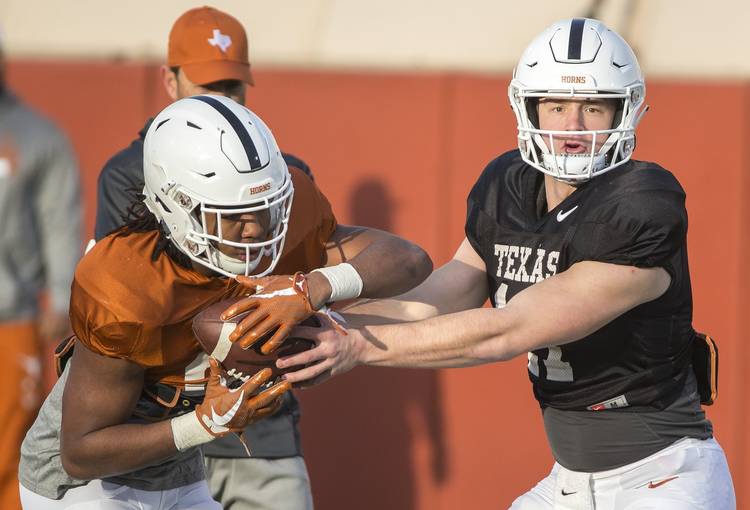 Texas quarterback Sam Ehlinger (11) hands the ball off to running back Keaontay Ingram (26) during spring practice at the Frank Denius practice fields in Austin, Texas, Friday, 15, 2019

Who’s been the biggest surprise so far this spring?

His answer is likely to please lots of Longhorns fans: Running back Keaontay Ingram.

Ingram’s weight was a sizable talking point last season. He wasn’t too big; he was too small. The freshman from Carthage was listed at 205 pounds, a size that coaches felt was too light for a full-time Big 12 running back.

Ingram averaged 10.9 carries per game while splitting time with graduate transfer Tre Watson. The 6-foot-tall Ingram typically got anywhere from 11-13 carries during the middle portion of the season, tallying up a season-high 19 against Baylor for 110 yards. That was his only 100-yard game.

Watson was no pushover. He finished third in the Big 12 with 185 carries. Watson (5-11, 195) finished his collegiate career with 458 carries in five seasons, the first four coming at Cal.

This spring, Ingram is listed at 215 pounds. He’s considered the Longhorns’ top threat in the backfield.

“Obviously, weight and good weight is padding for your body,” Herman said. “It’s protection. It’s armor, especially for your joints.”

Herman did not want to get into specifics about play-calling but noted, “It was a big deal. Let’s just put it that way. I think any time a kid puts that kind of good weight on in a short period of time, he gets a lot of confidence, too. You can see him running out there with confidence right now.”

Spring practice hasn’t been kind to Texas running backs in recent years. Knock on wood for Ingram and his colleagues.

“He looks very natural back there,” Herman said of his prized recruit from Cuero. “So we want him to get a good feel for that. Pass protection is a big deal, too. That, he’s never done before, but that will come in training camp.”

And what to make of returning veterans Daniel Young and Kirk Johnson? Herman said those players are “right there” with Ingram and Whittington, although they bring a different skill set.

“I’m pleased with that room right now,” Herman said. “Knock on wood. They’ve done a really good job, and we’ve been in pads only twice. But thus far, all four of those guys have played well.”

Adeoye fitting in: On the defensive side, Herman called out linebacker Ayodele Adeoye for getting off to a strong start this spring.

Adeoye (6-1, 250) played in only four games last season, so he was able to claim a redshirt year. He battled some knee problems but was able to get healthy for the season’s stretch run.

The Longhorns lost senior linebackers Gary Johnson and Anthony Wheeler, so the door is wide open for the St. Louis product who graduated from IMG Academy.

“I think he finally feels very healthy, so it’s easier for him to play fast and less guarded,” Herman said. “And It think he feels better about his body. He came in looking like a grown man, but he’s changed it now for the better.”

Odds and ends: Herman said backup quarterback Casey Thompson will start getting some practice time with the first-team offense “so we can evaluate him a little more.” Spring is also a time when offensive line coach Herb Hand experiments with different lineup combinations.

Receiver Devin Duvernay (pubic bone), linebacker Caleb Johnson (shoulder) and cornerback Anthony Cook (hamstring) all practiced after having the week off for spring break. Receiver Collin Johnson (knee) was limited in Monday’s workout, but his recovery is still on track.

Back on track: UT resumed classed Monday after spring break, and the Longhorns had an early wake-up call to get back on the practice field. A full week off during spring practice may sound weird, but now Texas will have a regular schedule.

“We’ve done it this way before, and what is nice is these next three weeks will be very rhythmic,” Herman said. “Now, it’s Monday, Wednesday, Friday and Saturday. It’s just how the calendar falls this year and how spring break falls. But I feel good about it.”

Pro day is Wednesday: Former Texas defensive back P.J. Locke III and tight end Andrew Beck watched the workouts at Frank Denius Fields. Locke’s bulging biceps were noticeable. Both will participate in Texas’ pro timing day on Wednesday. The Longhorns are scheduled to work out on Monday morning and then give way to the NFL scouts and all their stopwatches during the afternoon.