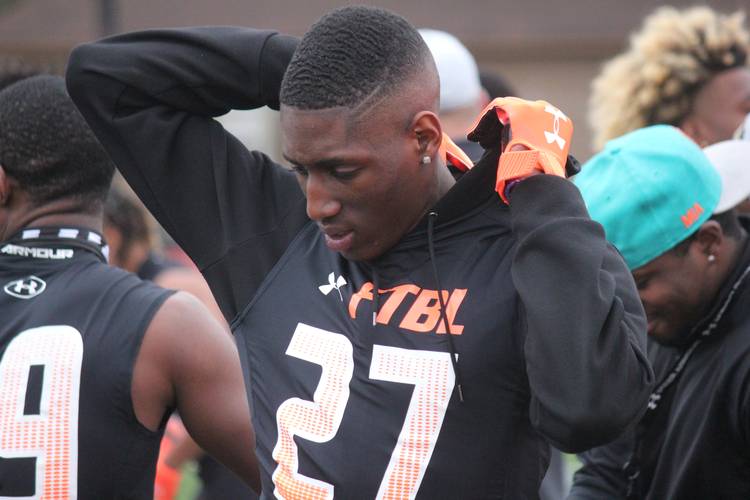 Texas’ 2020 recruiting class is off to a fast start with four commitments before April. All four play offense, however, and it’s likely that the Longhorns will begin to push to build their defensive foundation in the current cycle. A handful of players are starting to emerge from the pack as commitment candidates for Tom Herman’s program on that side of the football. On Tuesday, we looked at five UT offensive targets that are trending toward Texas. Here are five defensive targets leaning the same way:

Broughton is a hybrid lineman built for Texas’ odd-man front. He can grow into a true nosetackle or remain a strong-side end who excels at stuffing the run. He’s still new to football, so his skill set is even more impressive. A year or two of fine-tuning under the right staff could turn him into an all-conference player. Texas remains in good position for Broughton and he’s a body type the Longhorns lacked in their 2019 class.

“I’m happy Texas wants me there. They say they need me in this class,” Broughton said at The Opening regional in Houston. “Coach (Oscar) Giles and I are always talking and building a relationship.”

Dorbah is a pass-rushing specialist for the state’s top Class 5A program. He plays defensive end at Highland Park, but he’s likely to move to outside linebacker in college because to his lack of length. That’s fine if he picks Texas because the Longhorns like Dorbah as a B-backer, standing up as a rush linebacker but able to drop into coverage. Defensive coordinator Todd Orlando loves versatile players who can rush the passer and Dorbah checks those boxes.

“Texas is leading the way right now. They’ve probably recruited me the hardest and we’re on good terms right now,” Dorbah said two weeks ago. “Texas is building something special up there and it’ll be fun to watch in the near future.”

Thompson is a unique prospect capable of playing safety or outside linebacker. Texas likes him at the Joker position, which is essentially a combination of those roles to combat spread packages. Thompson is a big hitting safety with solid coverage skills. He’s at his best when working downhill against the run or patrolling an area of zone coverage. The lone question mark for him is if he’s speedy enough to stick with elite wide receivers at the college level. The Longhorns view him as more B.J. Foster than Caden Sterns, and that’s a role fitting of his skill set.

Ringo is the second-ranked cornerback in the state of Arizona and possibly the best pure athlete in the 2020 class. He posted the fifth-fastest 200-meter time in state history in his first track meet as a junior. Ringo is likely to hold that record by the time he steps foot on a college campus. To do that at 6-2 and 205 pounds is impressive. He moves like a cornerback much smaller than his frame, but it is the physicality and raw athleticism he brings to the position that makes him special. Ringo looks like an outside linebacker and runs like a wide receiver. It’s a rare and special combination.

Eaton transformed from little-known prospect to a top priority for elite programs around the nation since the end of his junior season as more colleges found his tape and he visited campuses with his Fast 7v7 squad. He’s a long, lean cornerback with solid ball skills and great athleticism. Texas has liked his build of player at corner since Orlando took over as defensive coordinator and he’s a favorite of cornerbacks coach Jason Washington.