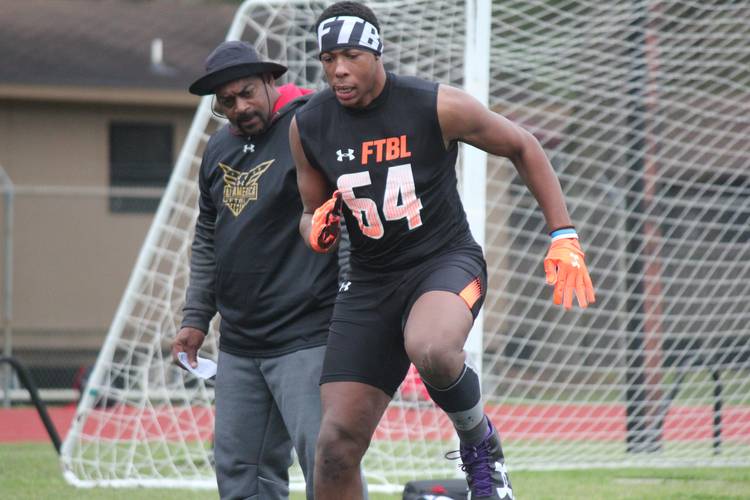 Tom Herman hopes to sign his third consecutive top-three national class in 2020 and is off to a fast start with commitments from four-star quarterback Hudson Card and a trio of talented offensive linemen. Expect more recruiting action to pick up once spring practice ends for Texas and begins around the state for high schools. The Orange-White game on April 13 will play host to a ton of talent.

Can Texas close at offensive line?

The Longhorns are off to a great start along the line with a trio of commitments from members of the 2020 Fabulous 55. It started with interior lineman Logan Parr and then snowballed into pledges from interior lineman Jake Majors and tackle Jaylen Garth. The remaining two targets are four-star tackles Chad Lindberg of Houston Clear Creek and Damieon George of Galena Park North Shore.

Lindberg is the prize of the cycle at tackle. He’s the No. 7-ranked player on the Fab 55 and the highest-rated offensive lineman in the state. His little brother goes to Texas and it’s believed that Stanford is the main threat to the Longhorns, as was the case for several elite linemen over the past few classes.

George is all upside with a 6-6 frame that carries weight athletically. He blocks at the best high school in Texas football and for Zachary Evans, the best running back in the 2020 class. Evans and George are on record as wanting to be a package deal as recruits and Evans is prepared to follow George to his school of choice. That makes George an even bigger priority for assistant coach Herb Hand and the rest of the Texas staff.

Landing all five of the top offensive linemen on Hand’s board is a win in itself. The prospect of clinching Evans in the process would give the Longhorns an elite foundation on which to build the running game in 2020 and beyond. Evans is the best player in the state and a potential transcendent talent at a position of need after missing on Noah Cain and Trey Sanders in 2019.

Texas built its 2018 class with an emphasis on the secondary. The 2019 class was headlined by wide receivers. The Longhorns want 2020 to be known as the class it landed the offensive linemen and running back needed to become the bullies of the Big 12.

Will Texas land the Austin-based recruits?

Austin was loaded with wide receiver talent in the 2019 class with Garrett Wilson signing with Ohio State, Jaylen Ellis picking Baylor and Elijah Higgins off to Stanford. The Longhorns did well at the position with the likes of Bru McCoy, Jake Smith and Marcus Washington, so the overall impact of missing on Garrett was likely mitigated.

The local talent Texas is chasing in 2020 are a pair of defensive linemen in Alfred Collins of Bastrop Cedar Creek and Princely Umanmielen of Manor. The duo already hold UT offers and are familiar with Texas and the staff. Umanmielen is a 6-4, 256-pound end who can also play defensive tackle. Collins is a long, rangy 6-5 prospect with the raw athleticism to become an elite pass rusher in college.

Texas is leading for defensive tackle Vernon Broughton of Houston Cypress Ridge and pass rushing specialist Prince Dorbah of Highland Park. Landing the foursome of Broughton, Dorbah, Umanmielen and Collins would give the Longhorns a versatile and talented defensive line class to mold behind the current batch of young players looking to replace all three starters from the 2018 squad.

How well can Texas recruit out of state?

Texas proved its willingness to pursue talent outside the state in the 2019 class when it inked 12 players from outside of Texas’ borders. Don’t expect that number to be duplicated in 2020, but Texas does need to cherry-pick a few elite prospects at need positions to remain atop the Big 12 recruiting standings for a third consecutive cycle.

Five-star cornerback Kelee Ringo from Arizona is a name to know. The Longhorns landed two players from Arizona in 2019. Ringo is a 6-2 corner with physicality, which is what Texas searches for. He’s a main priority for cornerbacks coach Jason Washington and the Longhorns are in good shape.

Other legitimate out-of-state targets include outside linebacker Sav’ell Smalls (Wash.), running back Kendall Milton (Calif.) and wide receivers Johnny Wilson (Calif.) and Mookie Cooper (Mo.). More names are sure to surface over the cycle as Texas gets a better understanding of where it stands with the current batch of offers.