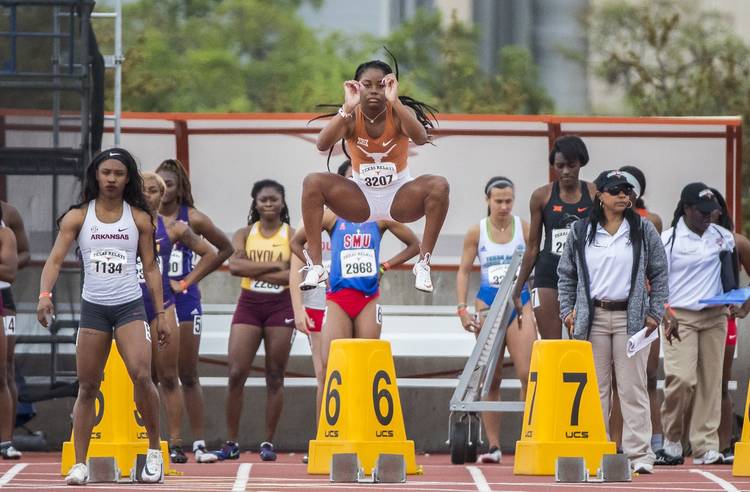 Texas freshman Kynnedy Flannel warms up before the 100-meter dash at the Texas Relays at Myers Stadium in Austin on March 29, 2019. [RICARDO B. BRAZZIELL/AMERICAN-STATESMAN]

Texas freshman Kynnedy Flannel spells her first name with a “Y.” The same goes for her middle name, Beatryce.

Why the Ys? Credit Y2K as her mother’s inspiration, says Flannel, who was born in 2000.

By now, track and field fans who visit Myers Stadium should be able to spell Flannel’s name without much trouble. Flannel, after all, won five Class 6A championships at the past two UIL state meets. On Friday she opened her first college outdoor season with an 11.37-second showing in the Texas Relays’ 100-meter dash. That result was the event’s fourth-best qualifying time.

“I was happy because that’s the fastest I’ve ever run (for a season-opening meet),” Flannel said. “Then it was like, people are running faster than me so I’ve got a lot to work on going into the finals. But it’s not a bad time. I know tomorrow, it will probably get better.”

An Alvin native, Flannel is coming off an indoor season in which she took home a conference title in the 200-meter dash. She also earned All-American honors. The Big 12 named her its women’s freshman of the year.

Don’t expect Flannel to brag about those accomplishments. She wouldn’t describe herself as quiet, but says she is “humble and grounded.” Texas coach Edrick  Floréal went a step further and likened the freshman to a reluctant superstar.

“Like Clark Kent has an alter ego. Most people want to be the alter ego, but Kynnedy has the cape on and she’s trying to hide it,”  Floréal said. “Her superpower is almost something she’s slightly uncomfortable with. The way she’s running now is good, but nowhere near what she’s capable of.”

If you’re asking UT senior Teahna Daniels, Flannel is capable of greatness. Earlier this week, she noted that Flannel’s confidence has grown since arriving at Texas. Her presence in practices has also pushed Daniels, a seven-time All-American.

“Honestly, the sky’s the limit for her,” said Daniels, who on Friday handed the baton to Flannel on UT’s second-place sprint medley relay. “I know she’s going to do some amazing things.”

At the NCAA’s indoor meet earlier this month, Flannel was the second one to cross the finish line in the 200. She was disqualified, however, for a lane violation. Flannel says the penalty was a teachable moment and she “learned how to take a loss better and I learned how to move on and not just let things dwell on me.”

In her first appearance since that NCAA meet, Flannel trailed just LSU’s Sha’Carri Richardson (11.17 seconds), Arkansas’ Kiara Parker (11.21) and Arkansas State’s Caitland Smith (11.34) in a field of 101 sprinters. On Saturday, that quartet will join five others in a championship race. The Texas Relays record in the 100 is 10.93 seconds.

Flannel will be accompanied in Saturday’s finals by UT hurdlers Rushelle Burton and John Burt. On Friday, Burton (13.14 seconds) and Burt (13.90 seconds) posted the third- and fourth-best qualifying times in the 100 and 110-meter hurdles. Burton is the Relays’ defending champion in the 100-meter hurdles.

Texas senior Georgia Wahl was among the day’s big winners and she placed first in the Section B triple jump and third in the Section B long jump. Within the span of an hour on Friday evening, UT senior Gabby Crank ran 800-meter legs for distance and sprint medley relays that finished first and second. The Longhorns also took home the titles in the men’s sprint and distance medley relays.