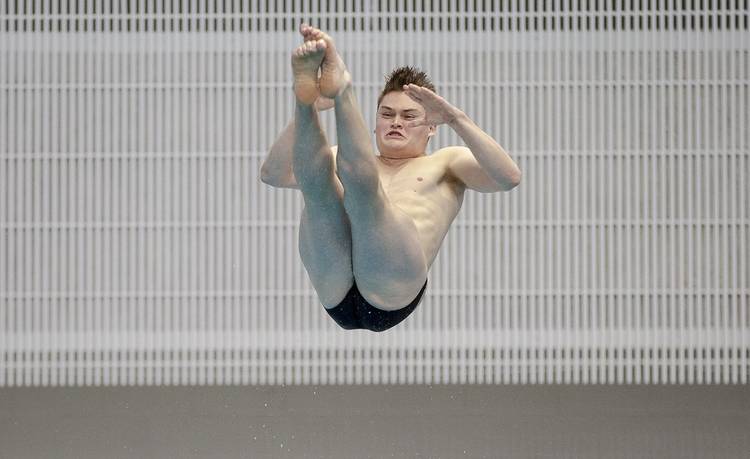 Deciding to embrace the home atmosphere in his second event at the NCAA men’s swimming and diving championships, Texas junior diver Grayson Campbell turned in a career-defining performance Friday night.

A day after finishing seventh in the 1-meter competition, Campbell took third in the 3-meter event (415.75 points), using the home boards and water of the Texas Swim Center to his advantage.

“It’s really rare to compete in the NCAA championships at home,” Campbell said. “Thursday, I stayed reserved in myself and didn’t embrace it. But tonight, taking in the atmosphere and seeing all the Texas supporters, alumni, former teammates and current teammates in the stands was absolutely amazing.”

Campbell qualified for finals with a sixth-place showing in prelims but saved his best performances for the last six rounds.

“Coming into (finals) after the way prelims went, I kind of had a feeling that if I dove well, anything could happen and a top-three (finish) was a possibility,” he said. “I shifted my focus to not just improving from last year, but aiming for a top-three finish.”

Feeding off the rowdy home crowd, Walker noted he didn’t feel any nerves.

“My (approach down the board) was working well, and that’s a vital part of the dive,” he said. “I think that comes with home-pool advantage. Training on these boards every day, I felt really comfortable competing on them.”

Longhorns freshman Drew Kibler also recorded a third-place finish Friday, doing so in the 200-yard freestyle (1 minute, 31.76 seconds) despite being in lane eight.

“I snuck into finals in prelims this morning and I knew I had a lot more to give,” Kibler said. “Tonight my strategy was to go out with the field with as long a stroke as possible, with some easy speed going and then bring it home as best as I could. I was happy with the execution. … To get third is around what I thought I could do.”

Kibler swam next to teammates Townley Haas in lane seven and Jeff Newkirk in lane six, something he mentioned as being beneficial.

“I’m kind of an emotional swimmer,” he said. “I get really nervous, especially on a big stage like this, so being next to two of my teammates I train with every single day and being in our home pool really made me feel relaxed.”

John Shebat finished fourth in the 100 back (44.71) for the Longhorns, with fellow Texas swimmer Ryan Harty coming in fifth (45.05). The two later teamed up with Charlie Scheinfeld and Tate Jackson for fourth place in the 200 medley relay (1:22.58).

Jordan Windle marked the final all-American performer of the day for the Longhorns, placing seventh in the 3-meter diving (359.65).

Farris’ time was also the second-fastest in the event’s history.

Texas has a firm grasp on second place in the team standings heading into the final day with 329 points, trailing Cal by 43 points and ahead of Indiana by 51 1/2 points.

In line for their 33rd top-three finish as a team, the Longhorns are enjoying competing at home.

“It’s been incredible with all the alumni, parents and teammates here,” Kibler said. “Usually I’m not one to look around too much during a meet, but I’ve been looking around and feeding off all the support we’ve been receiving here.”