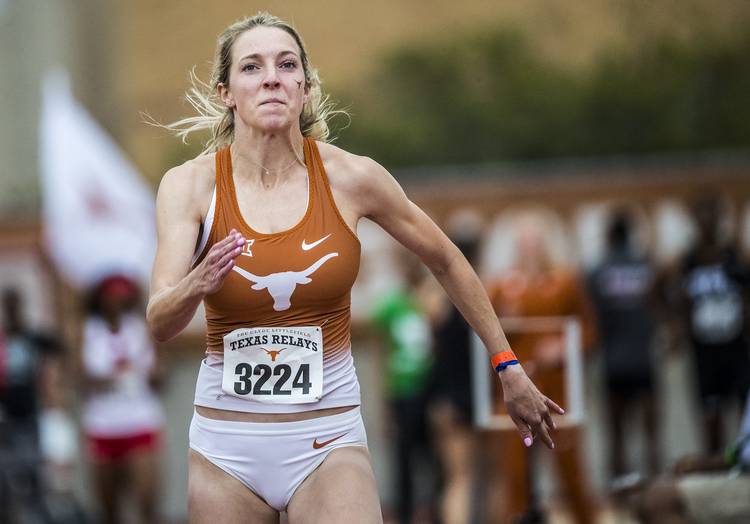 Texas Georgia Wahl, runs down the runway to jump in the long distance jump competing in the Long Jump event during the Clyde Littlefield 92nd Texas Relays at Mike A. Myers Stadium in Austin, Texas Friday, March 29, 2019 [RICARDO B. BRAZZIELL/AMERICAN-STATESMAN]

Texas senior Georgia Wahl had the rest of the field in the women’s Section B triple jump right where she wanted them on Friday.

Needing her best effort on her final try to accomplish a come-from-behind victory, Wahl pulled it off for her first Texas Relays title at Mike A. Myers Stadium.

Wahl’s final jump measured 42-4.25 feet and pushed her ahead of Texas Tech’s Chelsey Cole, who led entering the final round and finished second at 42-1.25.

Advertisement
“Looking up at the standings definitely makes me want to go farther on my last jump. I usually have my best jump in the sixth round,” Wahl said. “It pushes me to move up a little bit more, especially when it’s just a matter of a few centimeters.”

Conferring with Texas head coach Edrick Floréal prior to her winning effort filled Wahl with confidence, she said.

“Coach Flo said, `You only have to go this much,'” said Wahl, spreading her fingers. “I was like, `I can do that easily.’

“I knew I had won because after my jump, Coach goes, “Yeah!”

Wahl’s milestone victory followed a third-place finish in the long jump earlier in the day. It left her with enough time to recharge and mentally prepare for the triple jump in the final go-round on her home track.

“I wanted to come out and have the best season I’ve ever had, and that’s what I got,” said Wahl, who finished seventh in the triple jump at the Texas Relays last year. “This is my last outdoor season at Texas. More than anything, I want to go into it with no fear and no doubts. I’m just tying to let it rip and not really care what happens.”

Wahl’s winning triple jump was her second-best ever and qualifies her for the NCAA regionals in May. She established a personal best (42-7.5 feet) at last year’s NCAA West preliminary round, and believes Friday’s performance puts her on pace to qualify for the NCAA Championship June 5-8 in Austin.

“My goal was to get my regionals mark today. At regionals, I’ll definitely need to jump a little bit farther for nationals,” Wahl said. “We’re going to work a lot on keeping my leg up a little bit more, and not dropping it so much. There’s definitely a lot of improvement I can make. I’m hoping to put another foot and a half onto that mark.”