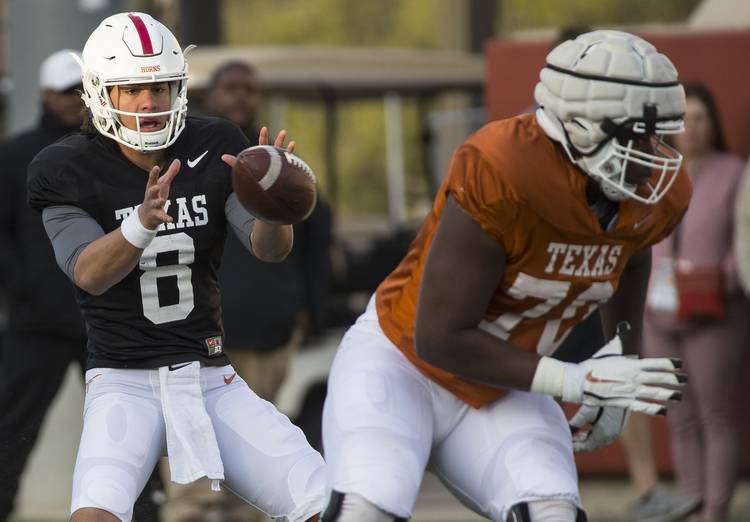 If Texas had any questions about its backup quarterbacks, it got a few answers on Saturday.

With incumbent starter Sam Ehlinger out with an illness, freshmen Casey Thompson and Roschon Johnson ran the show in UT’s team scrimmage. Thompson, who redshirted and did not play last year, worked exclusively with the first-string offense while Johnson, an early enrollee and four-star recruit, handled the second-string duties.

Head coach Tom Herman said Ehlinger has tested negative for mumps. Swelling and soreness still exists in the quarterback’s throat, but the illness is not believed to be serious. Herman had earlier expressed a desire for Thompson to get more first-string snaps this spring. With Ehlinger also out Friday, Thompson got that chance.

“Casey was pretty nervous yesterday, so I think that affected him a little bit. Today, he looked good,” Herman said. “Got a long way to go. For a guy who has never taken a snap in a game to be running with the first-team offense, I thought he operated it well and made some real good decisions.”

Saturday’s scrimmage was closed to the media, but Herman said it featured 51 non-scripted plays for his first-team offense and defense. The second-stringers got 54 snaps. Herman ruled that the offense won the day, saying that the “offense certainly got the better of the defense today.” The first-team defense did force two turnovers as linebacker Jeffrey McCulloch snagged an interception and the offense fumbled away a snap.

The receiving corps was working without senior Collin Johnson (knee), and five-star freshman Bru McCoy was a non-contract participant due to what OrangeBloods.com had previously reported was a shoulder injury. UT limited senior Devin Duvernay (pubic bone) to 25 reps. The injury report for the receivers, though, paled in comparison to their defensive counterparts.

Herman announced after the scrimmage that junior safety Chris Brown had been taken to a local hospital to have a lung issue evaluated. Herman said the situation wasn’t life-threatening but something that needed to be looked at. Brown joins fellow safeties Brandon Jones (ankle), Caden Sterns (knee) and B.J. Foster (concussion) on the sidelines.

Those four players combined for 31 starts last season. Who did that leave to patrol the secondary in the scrimmage?

“I think I saw coach (Craig) Naivar out there,” joked Herman before mentioning DeMarvion Overshown and nickel back Josh Thompson.

Herman said UT mostly ran its base offense. More plays will be installed during the next week of practices. The team’s conditioning also will have to improve going forward; while conceding that UT had practiced on back-to-back days, Herman expressed concern with the team’s fatigue level during the scrimmage.

On UT’s spring schedule, the scrimmage on Saturday represented the seventh of 15 practices.  Texas’ annual spring game is scheduled for April 13.