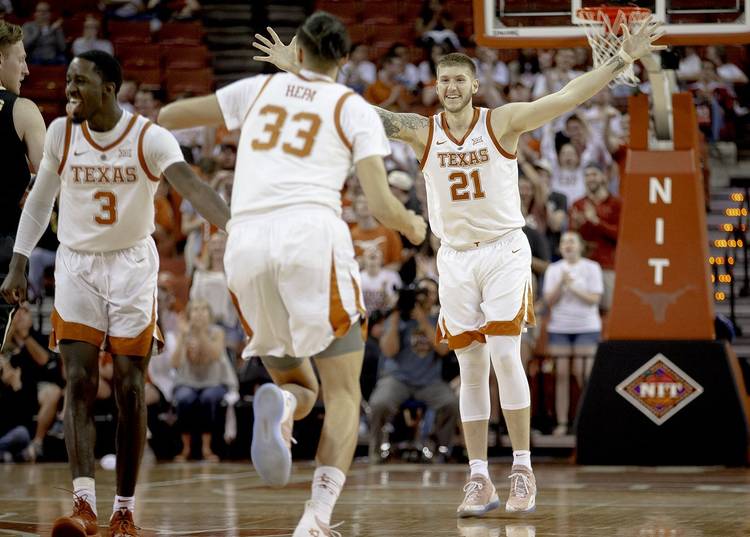 Texas forward Dylan Osetkowski (21) celebrates a dunk by forward Kamaka Hepa (33) against Colorado during an NCAA college basketball game in the quarterfinals of the NIT on Wednesday, March 27, 2019, in Austin, Texas. (Nick Wagner/Austin American-Statesman via AP)

NEW YORK — Dylan Osetkowski has the right state of mind this week.

“Let’s go talk by the window,” the Texas senior said. “I want to look out and see Central Park.”

Sure enough, it’s a hell of a view from the sixth floor of the City House gymnasium at the New York Athletic Club. Strange as it sounds, the view from a random hotel window in Minneapolis would look incredibly better this week. But instead of the Final Four, Texas is one of the final four teams left in the NIT.

Nothing Osetkowski can do about that now. So he’s relishing the moment — not to mention the crazy sights and bright lights on Broadway — as Texas (19-16) prepares to face TCU in Tuesday’s semifinal at Madison Square Garden.

The Longhorns devoured every bread crumb, every piece of calamari and every shred of pasta they could at Carmine’s. Pro tip walking around Times Square: Don’t get suckered into letting the Naked Cowboy take a selfie with you. Have a teammate take your picture.

Then, the Horns had a sobering trip to Ground Zero on Monday and toured the National 9/11 Memorial and Museum. It’s hard to believe, but every player on Texas’ roster was in day care or diapers when those planes hit the World Trade Center in 2001.

Our team took an incredibly powerful visit to the World Trade Center Memorial and September 11 Museum this morning. 🇺🇸 pic.twitter.com/tp2V0hO9gH

“Both my mom and my aunt knew people in the twin towers that day,” said Osetkowski, a San Diego product. “I think my aunt was supposed to be in there that day.”

Monday afternoon’s workout was held in a gym where most visiting NBA teams practice before facing the Knicks or Nets. The club’s hall of fame, located on the second floor, honors centuries of Olympic greatness. T.E. Burke’s photo is in the upper left corner on the wall; he won the 100-meter and 400-meter titles in 1896.

Multi-millionaires were doing stomach crunches just beyond the baseline while the amateurs who generate infinitely more cash for Texas were sharpening their full-court press. UT strength coach Daniel Roose looked at the graybeards and said, “Only weight room in the world with stock quotes.”

Then, it sort of hits you all at once. It’s April, and even though it’s the NIT, Texas is still playing basketball, still angling for a championship.

“From the initial feeling of Selection Sunday, us not making the tournament, us being in the NIT, to being able to stay in Times Square and go play in Madison Square Garden and work out at the New York Athletic Club,” Osetkowski said, “I don’t know.”

He thought for a moment and added, “It’s just a cool experience regardless of what tournament you’re playing in. They flew us out here to play basketball.”

At this point in any postseason tournament, players normally face an opponent they know little about. Not this time. The Longhorns and Horned Frogs (23-13) don’t need any name tags, thank you. Tuesday will be the 177th all-time meeting between the two schools.

The only loss came last season when TCU’s Jaylen Fisher inexplicably missed a game-winning layup in double overtime. Earlier that day, it was announced that UT’s Andrew Jones was diagnosed with leukemia. A higher power with Zion Williamson-like shot blocking skills? Maybe.

The loss that still sticks in Smart’s craw came on March 9. On UT’s senior day, the Horns got flat embarrassed. TCU’s Desmond Bane had 34 points while Texas was 4-for-19 from 3-point range.

“They beat us both times (this season), so that’s certainly something that our guys are very well aware of and we’ve talked about a lot,” Smart said. “But for us, it’s more about looking at how. How were they in the first two games? How we can better in this game (Tuesday) night?”

Senior Kerwin Roach II was suspended for the last TCU loss and watched senior day from the bench. This trip to New York is something of a senior week for both him and Osetkowski.

“I want to go after these guys,” Roach said. “I want to get a redemption game. I want to beat ’em to end their season and extend my senior season as much as I can.”

Texas will be without the Big 12 freshman of the year, Jaxson Hayes. He was still wearing a knee brace and did not participate in Monday’s workout. He’s done for the year, and most observers believe, done with UT. Hayes has not officially said whether he’s going pro.

The Horns won three NIT games without him, though. That was against South Dakota State, Xavier and Colorado. TCU, with Bane and athletic big men Kouat Noi and JD Miller, presents an entirely different dynamic. Lipscomb and Wichita State are in the other semifinal. The NIT championship game is scheduled for Thursday.

“We’re here, might as well try to win the whole thing,” Osetkowski said. “Might as well. Not many people can say they went out of college with a win.”