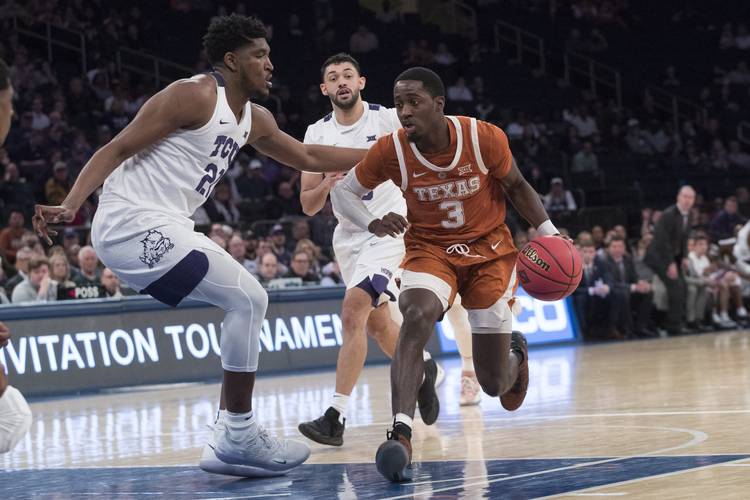 NEW YORK — In this town, nothing ever dies. It always finds new life.

Theater houses have put up Porgy and Bess revivals darn near every decade since the 1940s. Guys and Dolls always draws a crowd. They’ll be doing The King and I and My Fair Lady for years to come.

Over at Madison Square Garden, the Texas basketball program is staging its own revival of sorts.

The Longhorns, who saw their season cancelled on Selection Sunday, have won four straight and can now win the NIT championship Thursday. Only Lipscomb (29-7) stands in UT’s way.

Perhaps some Texas fans mentally checked out when the Horns (20-16) were denied a spot in the NCAA Tournament. But freshman Courtney Ramey is encouraging those to take another look. After all, Texas has a chance to win a championship and hang a banner. That hasn’t happened since 2008 when UT won the Big 12.

“It would let fans know that Texas is serious, and we’re going to make a good run next year,” Ramey said. “It bothers me a lot. I’m a winning player, and we’ve got other winning players on this team. When we hear people talk about this, this and that, we try not to focus on it, but you still hear it.”

Ramey said an NIT championship could be a huge springboard into the offseason. “Our main job is to win games,” he said. “If we win games, what can they say?”

So how should one properly balance what an NIT championship means? Obviously, winning a postseason tournament is a good thing. But no self-respecting coach or player wants to be even associated with the NIT.

For Texas coach Shaka Smart, a NIT trophy would provide some balm after a late-season swoon. A 20-win season, a strong NIT push and job security would leave anyone walking on the sunny side of the street.

Smart spoke to reporters for about 20 minutes in a random meeting room inside the Marriott Marquis hotel on Wednesday. It was as candid as Smart has been all season.

“When I played after a loss, I didn’t talk to anyone for two days,” Smart said. “It was really hard for me as a coach early on to understand how could anyone could be literally smiling hours after a game. I do believe that stretch was really, really upsetting, disappointing to our guys.

“Obviously, a lot of people had negative things to say about our team, our players, me, Texas basketball,” he added. “So we’ve challenged our guys’ pride. Hey, is this about pride? Absolutely.”

As for the matchup itself, Lipscomb’s Garrison Matthews is a scoring machine. The senior has 2,465 career points and wants to go out a winner, same as UT seniors Kerwin Roach II and Dylan Osetkowski.

Matthews is a career 37.5% percent shooter from 3-point range. The Bisons also have talented scorers in Rob Marberry and Kenny Cooper. This will be no fun stroll down Eighth Avenue.

This is Osetkowski’s last chance to leave a legacy at Texas. “It would be cool to just leave my mark on the university and put something up in the gym that’s permanent,” he said.

Asked what Roach would tell an incoming freshman, he said, “Just don’t expect everything to be a straight line. Everybody’s path is different. It’s really like a heartbeat monitor, lots of ups and downs. You shouldn’t expect it to be a straight flat line to success. It’s really how you respond to adversity when things don’t go your way.”

No, things didn’t go the Longhorns’ way this season. A victory on Thursday would soften the edges, though.

“When opportunities are given to you, you just have to seize it,” Roach said. “Whenever you’ve got something in front of your face, you’ve got to go all out.”

Malcolm Epps has emerged this spring, but can Texas find him playing time during the fall?