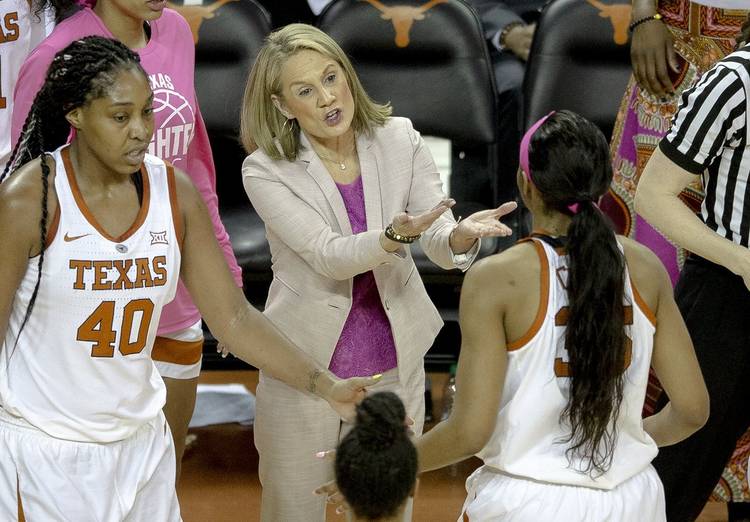 Two weeks after her own season came to an end, Karen Aston has flown to Tampa for a national coaches convention and to watch the NCAA women’s Final Four.

The University of Texas basketball coach has vivid memories of Notre Dame winning a spectacular national championship last April in Columbus, Ohio. Aston’s goal every year is to attend the Final Four with her team tagging along.

Texas did not have the right pieces to make a reasonable bid for Tampa this year. A first-round tournament loss to Indiana is not what the Longhorns had in mind when the season tipped off in November. The coach declined to blame injuries to senior guard Lashann Higgs and Sedona Prince for the team “falling short of expectations.”

“It’s really important to get back to get back to the brand of basketball our fans love seeing and our players love playing,” said Aston, who will enter her eighth year at Texas when practice convenes in October.

Barring injury, Texas should be vastly improved from the team that finished the year 23-10 last month.

Higgs should be at full strength after suffering a torn ACL in the fourth game of the season. Prince is expected to be in the lineup after missing the year with a broken leg suffered last August in Mexico City. Charli Collier, a 6-5 post, should improve as she enters her sophomore season. And three incoming freshmen with impressive credentials will bring depth to the lineup.

Before looking ahead, Aston was asked specific questions about what went wrong last season. A team that has been chasing Baylor for years finished third in the Big 12. When the NCAAs began, the Longhorns could not beat an Indiana team that finished in 10th place in the Big 10.

Aston said the Longhorns lacks two assets vital in the development of any team − chemistry and consistency. There were times Texas played well enough to knock off any team in the country, but it was rare the players were consistent for an entire game.

The Longhorns ranked fourth in the nation in rebounding, averaging 11 boards a game more than their opponents. They struggled, though, with turnovers, finishing 207th in that category.

The highlight of the year was UT’s championship at the Gulf Coast Classic in November in Estero, Fla. Despite losing Higgs to injury in a first-round victory over Quinnipiac, the Longhorns went 3-0 to take the trophy. The Longhorns were “resilient” after losing their best all-around player, a trait they carried most of the year, Aston said.

How vital is Higgs? Aston described the 5-9 guard from Cedar Ridge High School in Round Rock as the team’s best on-ball defender and most dangerous offensive weapon. Higgs and returning point guard Sug Sutton will be called upon for perimeter shooting, a role Danni Williams held in her one season at Texas.

Another perimeter shooter, Destiny Littleton, left the team last week for personal reasons, Aston said. The coach added she had hoped the shooting guard would return for her junior season.

With post Jatarie White graduating, the Longhorns will count more on Collier to take up the slack in the front court. Collier, ranked by ESPN as the nation’s No. 2 recruit in the Class of 2018, struggled for much of the season while adjusting to the speed and physicality of the college game.

“She’s got to be ready and willing to be prime time,” Aston said.

The Longhorns will also welcome three freshmen who are expected to make a quick impact. The plum of the class will be 5-11 guard Celeste Taylor, a McDonald’s All-America player from Long Island Lutheran High. She is regarded as the No. 20 overall recruit and No. 7 guard in the Class of 2019.

Joining Taylor at Texas will be a pair of players from Australia — 6-4 post-forward Ashley Hannan and 5-9 Isabel Palmer. Both were scouted by Jamie Carey when the Texas associate head coach made a recruiting trip to watch national junior games in Melbourne, Australia. Palmer is expected to sign with the Longhorns later this spring.

Aston, whose seven years at Texas includes a 165-72 record and six straight NCAA Tournament appearances, said all three players should contribute as freshmen.

The coach added that Hannan can “stretch the floor” because of her ability to hit 3-point shots.

The 2020 Final Four is scheduled to be in New Orleans. Aston will be there. It’s just a matter of whether her players will join her.

Following a week away from the Big 12, Texas upended by Baylor in its return to conference play