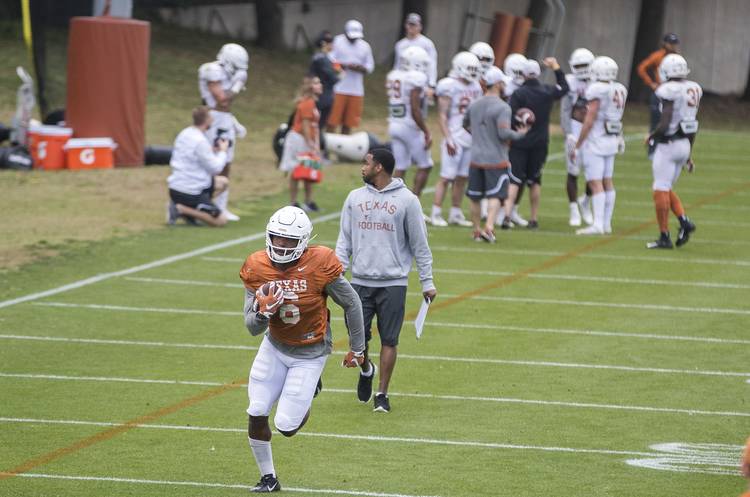 “I don’t want to steal Tim’s thunder, but our two running backs have been outstanding all camp. They have been,” Orlando said after Tuesday’s practice on the final week of spring drills. The spring game is scheduled for 6:30 p.m. Saturday at Royal-Memorial Stadium.

What’s important to understand is that Orlando is known for his straight-talk demeanor. He doesn’t just throw out hosannas willy-nilly. If he says he’s been impressed with Keaontay Ingram and Jordan Whittington, it’s real.

In praising quarterback Sam Ehlinger, Orlando gave a sense of how the Texas starter is understanding more nuances of the position.

“And then Sam’s really had command of this package,” Orlando said. “He can manipulate us. He can get us to do what he needs to do to get the ball to playmakers. We’re getting to that point where we’re dynamic.”

When Beck finally got his chance at the microphone, the third-year coordinator rattled off a laundry list of names — names like receivers Collin Johnson, Devin Duvernay, Brennan Eagles, Malcolm Epps and star freshman Bru McCoy.

“Well, certainly, you’ve got to get more creative,” Beck said. “There are playmakers kind of everywhere, and our job will be to figure out how to distribute the ball to all of those guys.”

Texas ranked sixth in the Big 12 in total offense last season (411.6 yards per game). The Horns were fifth in scoring (31.1). Those numbers are fine when the defense is playing well. But this league — and ultimately getting to the College Football Playoff — is all about scoring, scoring and more scoring.

Texas was the only Power Five-level team in the nation last season without an offensive play stretching 50 yards or more.

Roach the leader: Defensive end Malcolm Roach’s time has arrived. The Baton Rouge, La., product will be a senior this fall and an odds-on favorite to be a team captain.

“Malcolm was a really good follower were he could just kind of repeat the message,” Orlando said. “But I never thought he took himself out there to say, ‘This is mine now. If we don’t play well, this is on me.’ Where I think in the past, he would kind of give it to those other guys and just be a guy that could rally the troops. Well now, he’s doing that.”

Orlando indicated Roach (34 career games, 94 tackles) is now someone who pushes other players to pick up the pace at practice. “I’ve thanked him personally three times in defensive unit rooms for what he’s done for us as a coaching staff,” Orlando said.

This season, Orlando said “it’s still a battle” between Gerald Wilbon, who will be a 335-pound senior, and Keondre Coburn, a 340-pounder that was a star of the 2018 recruiting class.

Orlando said if a typical game has 80 plays, both players might rotate somewhat evenly and finish in the 30-35 play range.

“There are things that Wilbon does a little bit better because of experience,” Orlando said. “Coburn is explosive. It’s one of those things, can he do multiple reps? It’s just experience (versus) a little bit more athleticism.”

Fighting the injury bug: Orlando said “it may be a little bit of a blessing” that veteran safeties Brandon Jones and Caden Sterns are missing spring practice with injuries. It’s opened the door for younger players to get sustained practice time.

“We don’t necessarily have to see them every play because we know what they can do,” Orlando said.

New look at TE: The tight end position will have a totally different look this season without departed senior leader Andrew Beck. Beck said he’s pleased with Cade Brewer, a Lake Travis product, along with Reese Leitao and Jared Wiley.

The tight end was featured prominently in Herman and Beck’s offense last season. Either that, or Ehlinger used his roommate as a security blanket. Beck had a career year with 28 catches for 281 yards and two touchdowns.

“Replacing Beck in the locker room is harder, because he was such a dominant force for us,” Beck said. “And we’re still developing that. The more guys get into game situation and start playing for us, the more that’s going to happen.”