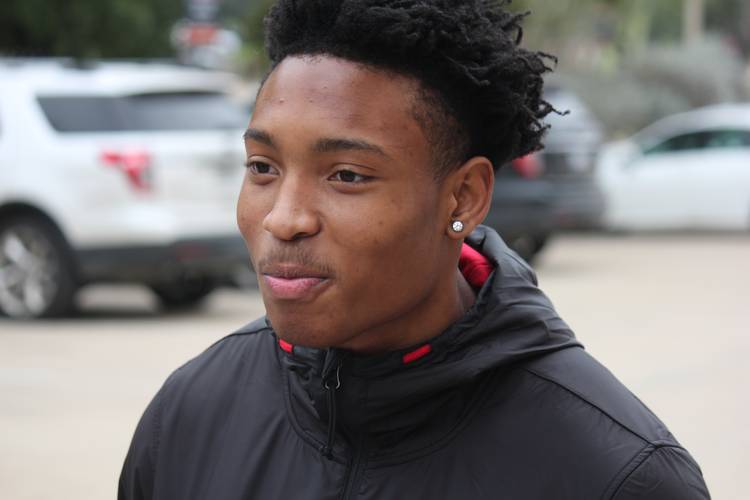 He learned that at an early age from a father who is no stranger to mistakes. Marcus, a 6-2 wide receiver from Trinity Catholic in St. Louis, watched and learned. The good and the bad. His brother Will played college football and got a shot in the NFL. It’s now Marcus’ turn to try his talents on the highest level of college football. But not without a higher purpose.

“I’ve seen the highest of the highs with my brother being successful in college and now in life as an adult, as well as my mom being a nurse,” Marcus said. “I also was without my father until I was nearly five years old because he was in jail. I’ve watched him turn around his life and prepare us for what not to do, and it saved my life. My family is the only reason I’m on the right path.”

The Washington clan is tight-knit. A quick trip to the grandparents’ house resulted in photo albums and a grandfather beaming over his grandson whom he calls “Showtime” with pride. Washington’s father, Carl, or “Nu-Nu” as he also goes by, is a no-nonsense father with a practical approach to recruiting.

It was never about the fame or Twitter clout for Marcus. The rankings weren’t important. The goal was to do something better and that means obtaining a college degree. Marcus wants to become a broadcast journalist and make it big like Stephen A. Smith once his football career ends.

“There is nothing left for Marcus to accomplish in St. Louis,” his father said. “It’s now time for him to create his own path at Texas, and that means off the field. He needs to use his time there to set himself up for a better life. We knew the recruiting process was mostly noise.

“He’ll need to get down there and work because that ranking stuff and winning an MVP of an Under Armour Game doesn’t matter to your coaches or teammates. You’re just a freshman.”

Washington is a highly-touted freshman, though. He’ll arrive on campus in early June with the rest of UT’s 2019 signees that didn’t enroll early. He was one of eight national top-150 prospects in the class that signed with Texas, whose class ranked third in the country for a second year in a row. Washington was a four-star who ranked 145th nationally and as the No. 24th-best wide receiver prospect in the nation. He was among a great group of receivers signed by Texas that included Gatorade national player of the year Jake Smith from Arizona and California five-star Bru McCoy, who is already on campus after a transfer from USC.

There was a time when Washington was considered one of the top 10 receivers in the country. It was at The Opening Finals in Frisco where he injured his hamstring. He dipped in the recruiting rankings after not showcasing at the event. Then there was the Ohio State drama involving wide receivers coach Zach Smith, who eventually left the Buckeyes program with the fallout resulting in Urban Meyer missing a few games to start the season. Washington had planned on committing to Ohio State before his senior season. Texas pounced when that changed.

“It was actually Mookie (Cooper) who got me down to Texas,” he explained. “Once the stuff at Ohio State blew up, I wasn’t exactly sure what I wanted. Mookie told me to take a trip down to Texas. I went for the USC game and it changed everything.”

Recruiting can be compared to dating in so many ways. One thing most married couples tell you is that “when you know, you know.” That’s how Washington talks about Texas. He couldn’t put his talented hands on the exact point on the visit that he realized Austin was his future home, but he knows he left that visit with UT firmly on his mind.

“After that visit, Texas was always my top school,” Washington said. “It wasn’t what I expected at all. The city was amazing and the atmosphere for that game was great. I feed off big settings and I saw Texas do that and win. I wanted to be part of that.”

The journey was never easy for Washington. He’s fully aware that he’ll start fresh in Austin with nothing handed to him, which is exactly how he wants it.

“Nothing is given to you when you’re from St. Louis,” he said. “It’s on you to go grab it, get out of here and do something better. My friends and I figured out that football was that ticket to great schools. We’re all trying to do this for our family and close friends. They’re our motivation.”

Trinity Catholic head coach Terrence Curry watched that motivation turn Washington into a young man. He recalls seeing immaturity from Washington when Curry arrived on campus as an assistant when Washington was an underclassman. Curry pushed him. Nu-Nu pushed Curry to push harder on Marcus, and that made it easier for Curry to do his job. Not every young talented player is part of a pack like Washington. He’s lucky in that regard.

“That family wants the best for Marcus and they give the people around him the license to toughen him up and be real with him,” Curry said. “That’s not always easy for young kids if there aren’t parents around or if the parents coddle the player. Marcus started to understand that the coaching meant I cared. He’s really blossomed as a player and he’s unafraid of challenges. He performs best in the big games.”

Washington takes pride in being Showtime. He admits to playing his best when pushed. He scored three touchdowns on three catches in Trinity Catholic’s state championship win in December. He scored two more at the Under Armour All-American Game in Orlando the following month, earning him the MVP award. The performance surprised everybody except the Washington clan.

“It was the goal to show up and dominate,” he said. “I like proving that I belong against the best. It’s motivation for me to prove I’m better. I had a good week and felt good going into the game. It was a great memory, but there are more important things to accomplish.”

That forward thinking is a product of a strong support system. Washington doesn’t consider getting to Texas an accomplishment. His goals are much bigger.

“I’m not going there to sit on the bench,” he said. “I know there is a lot of work ahead and that I need to prove myself all over again to a new staff, but I’m ready for that challenge. I’m excited for a new challenge.”

So is his father.

“Every dad wants something better for their kids. That’s all this is about,” Nu-Nu said. “I’m using my mistakes to show them that there is a better way. I did all the messing up for us, so they can just ask me what it is like instead of needing to experience it. I’ve failed if they repeat my mistakes. Marcus is a good kid with goals. I’m proud of who he is becoming as a man.”

‘Made in Austin’: Texas taking emotion-based approach this weekend to engage with fans