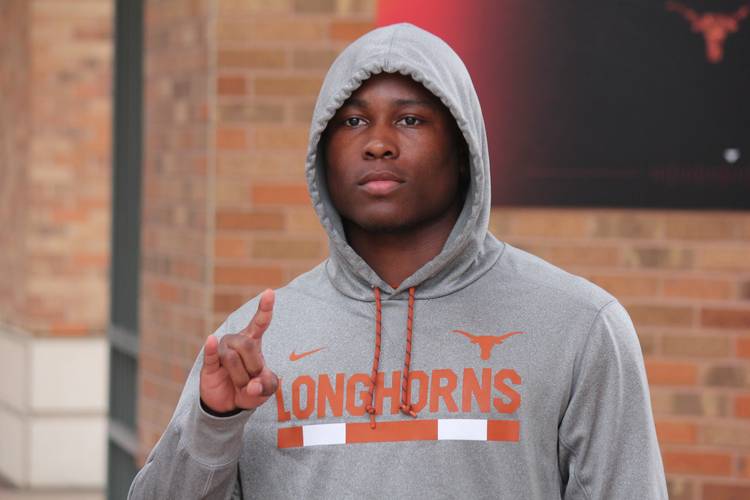 ST. LOUIS  —  Four-star wide receiver Mookie Cooper was enamored with Texas as a sophomore and into his junior season. He was the one who convinced St. Louis (Mo.) Trinity Catholic teammate Marcus Washington to take a visit to Texas for the Longhorns’ win over USC last September, which led Washington to eventually sign with the Longhorns.

Cooper was expected to follow Washington to Austin, and that came true on junior day when Cooper pledged to the Longhorns on Feb. 16.

Then, on March 8, Cooper de-committed.

“It was an emotional decision (to commit) and I realized I wasn’t ready to stop taking visits and listening to other programs,” Cooper said. “It was a hard conversation with the Texas coaches. It’s still all love, though. I got a text from Tom Herman on Wednesday.”

Cooper was pegged as Texas’ H-back for the 2020 class. He’s a 5-11 slot receiver capable of playing running back and excelling on jet sweeps. He’s one of the fastest recruits in the nation and expects to clock a 4.3 in the 40-yard dash at The Opening in St. Louis this weekend. He’s the No. 63-ranked prospect in the 2020 class and its No. 12-ranked receiver. Cooper holds 33 offers and led Trinity Catholic to a state championship as a junior.

The life of a high-profile recruit is stressful, even though Cooper understands he’s fortunate to be in this position. His former high school coach and life-long mentor Cory Patterson is now the tight ends coach at Illinois. Cooper is also hearing from LSU, Oklahoma, Miami, Tennessee, Ohio State and others with Texas still listed among his top schools.

“Freshman and sophomore year, the process was exciting because it was new and I was getting all these offers,” Cooper said. “Now, there is more responsibility and people start pulling you in different directions. It is much harder than I anticipated.”

Washington leaves St. Louis to enroll at Texas on June 2. The four-star receiver hopes Cooper, his friend and teammate, still eventually joins him in Austin. The friendship comes first, though; Washington will support Cooper whether the high-priority target picks the Longhorns or another school. Washington understands the recruiting process and the struggles it brings. He himself was ready to commit to Ohio State before Buckeyes assistant coach Zach Smith was unceremoniously relieved of his duties.

“There is no scouting report on Mookie,” Washington said. “He’s one of those rare players who can do whatever he wants. He’s known as a wide receiver, but he can do everything. I think he’s the best athlete in his class. He’s special, and he’s a leader.”

Trinity Catholic coach Terrance Curry lit up when speaking of Cooper’s athletic potential. He also served as an ear for Cooper when Cooper decided to open his recruitment in March.

“I tell all of our players to do their research and know before committing to a school. It’s a big decision and there’s no reason to rush it unless you know for sure,” Curry said. “Mookie is a freak athlete and a hard worker. The only thing that can stop Mookie Cooper from being great is Mookie Cooper.”

Cooper is already committed to the Under Armour All-America Game in Orlando after the conclusion of his senior season. His main goal is to repeat as state champions, as his role is expected to extend to defensive back as a senior with Trinity Catholic losing 14 players to Division I football. Washington is the reigning MVP of the Under Armour Game after scoring two touchdowns in January.

“Maybe we can go back-to-back in Orlando and bring that chain back to St. Louis again,” Cooper joked. “We felt slept on in St. Louis and hopefully performances like that put us on the map. There is a ton of talent in this area.”

RELATED: Tense about the Orange-White spring game? Relax, Texas fans, and just use the eye test

RELATED: ‘Made in Austin’: Texas taking emotion-based approach this weekend to engage with fans