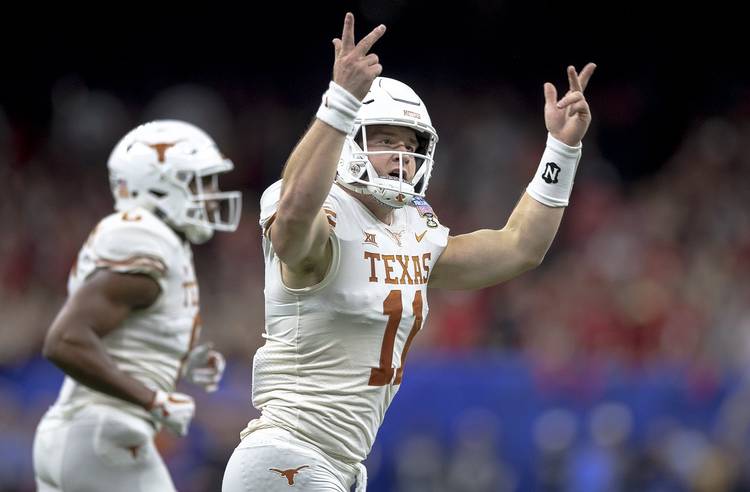 Don’t spend much too much time Saturday night dissecting position battles, measuring whether this junior has fractionally better explosiveness than that sophomore. Don’t worry about whether a freshman receiver gets behind a young defensive back. And for goodness sake, don’t worry about the combination along the offensive line.

When it comes to actual X’s-and-O’s specifics, the annual Orange-White spring game at Royal-Memorial Stadium means little. Coach Tom Herman purposely devises a vanilla format knowing all the world can watch and DVR it all, thanks to the Longhorn Network.

Instead, judge the spring game by this fundamental concept: Do these Longhorns pass the eyeball test? How do they look overall?

It’s a talented group stocked with four- and five-star talent. There is no quarterback question. Finally, Texas might have two rock-solid options at running back. There are plenty of stars out wide, and the first-team offensive line appears to be in good shape.

“I’m sure we’re going to be limited in what we do,” offensive coordinator Tim Beck said. “It’s about execution, ball security, guys playing hard, playing fast. That’s really what it’s going to be more about than anything else.”

Beck wants to see quarterback Sam Ehlinger look like, well, Sam Ehlinger. If anything, Beck wants to judge how new backup Casey Thompson handles the spotlight. He was essentially the fourth-stringer last year and could operate well under the radar.

Beck wants everyone to see what coaches and players have seen the last few weeks from running backs Keaontay Ingram and freshman Jordan Whittington. The play-calling will spread it around, so fans can cheer Devin Duvernay, Brennan Eagles and freshman Bru McCoy, too.

Fans would appreciate some big plays, no doubt. Texas was the only Power Five school last season with no offensive plays go 50 yards or more.

“I want us to play sharp, clean football,” Beck said. “I want us to see us protect the football, no penalties, good assignments and things like that.”

He wants defensive linemen Malcolm Roach and Ta’Quon Graham to be physical. That unit up front may have the biggest question marks after losing departed seniors Charles Omenihu, Chris Nelson and Breckyn Hager. Orlando especially wants to see linebackers Ayodele Adeoye, Joseph Ossai and Jeffrey McCulloch do what they’ve been doing all month long.

“I think the biggest part of it is when you get in front of a crowd as not to abandon your training,” Orlando said. “We talk about that all the time, which is fundamentals and technique. you can’t go onto the field and do something different because I’m in a different atmosphere and we (the coaches) aren’t around it.”

“If you’re going to go hard and be soft, then I don’t think anybody — fans, coaches and players — they don’t want to see that on the field,” Orlando said.

Herman has been relaxed this spring, almost like a boulder has been lifted off his shoulder or his head removed from some guillotine. That’s exactly how it’s supposed to feel early on at Texas. Remember how former coach Charlie Strong said he thought he’d “push a button” and everything would work? It didn’t.

Reaching the Big 12 title game, posting a 10-4 season and winning the Sugar Bowl was an everything-changer for Herman and everyone inside the football building. The program has truly turned a corner. Now comes the next challenge — pressing forward to win the Big 12 and ultimately reach the College Football Playoff.

Whatever happens on Saturday, remember that Texas will have reinforcements coming in August.

Receiver Collin Johnson and starting safeties Brandon Jones and Caden Sterns are all out this spring with various injuries. All are expected back. Georgia Tech transfer Parker Braun, a projected starting guard, will join the Horns this summer after finishing his undergraduate degree in Atlanta. That’s four starters who won’t play Saturday.

So relax, enjoy the day on Bevo Boulevard. Send the kids onto the field for the post-game autograph session. The season opener against Louisiana Tech is months away. LSU comes calling in five months.

Herman left no doubt about the goals for the 2019 calendar year. “We’ve got to win our conference,” he said on national signing day in February.

The Orange-White game is merely an early step on the journey.