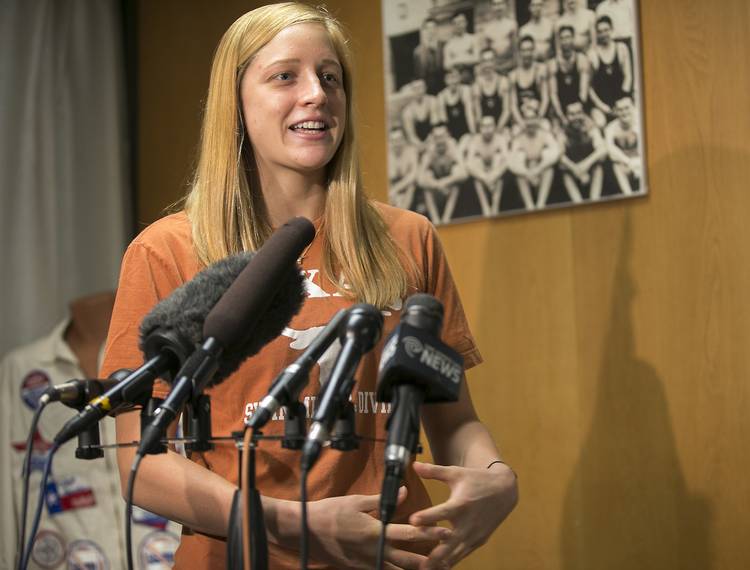 Former University of Texas swimmer Madisyn Cox filed a lawsuit Monday against a Dallas health and wellness company she says is responsible for her positive test for a banned substance last year. [Ralph Barrera/American-Statesman]

Insisting she’s a victim and not a cheater, former University of Texas standout swimmer Madisyn Cox filed a lawsuit on Monday saying her six-month suspension from the pool last year was the result of a multivitamin that was contaminated with a banned substance.

Cox, the 2017 world bronze medalist in the 200-meter individual medley, says the Dallas-based health and wellness company Cooper Aerobics is negligent for letting the performance-enhancing drug trimetazidine into its product and should reimburse her for lost financial and athletic opportunities and damage to her reputation.

While serving the suspension from March 2018 to September 2018, the lawsuit says Cox could not earn prize money or collect performance bonuses from her endorsement contract with a swimwear company. Removed from the U.S. National Team, she had to obtain private health insurance and could no longer earn stipends or appearance fees. Her No. 1 world ranking and her times were vacated.

Cox’s lawyer, Monica Cooper, said Wednesday she hasn’t calculated the estimated financial hit, “but we think it’s over $1 million.” The lawsuit was filed in Austin where Cox is currently training with aspirations of competing in the 2020 Summer Olympics in Tokyo.

Cooper Aerobics released a statement Wednesday saying it has not been served the lawsuit and is unaware of the specific allegations that Cox has made against the company.

“In September 2018, Cooper Concepts learned of Madisyn Cox’s complaint about the Cooper vitamin supplement she had been using and immediately removed it from its product line,” the statement says. “We are saddened and disappointed for Madisyn Cox and any competitions she missed. We carefully formulate ingredients to be included in our products and expect adherence to all appropriate standards.”

Cox’s trouble began in February 2018 when she submitted a urine and blood sample to swimming’s governing body, FINA. Instructed to list any substances she had ingested in the past seven days, Cox mentioned a multivitamin and mineral marketed to top athletes that she had been using for seven years, the lawsuit says. A month later she had tested positive for trimetazidine, a substance banned by competitive swimming and not approved for use in the United States by the Food and Drug Administration.

Set out to prove her innocence, Cox hired a laboratory in Salt Lake City to determine the source of the drug and had testers analyze vitamins from two bottles she had recently purchased labeled Cooper Complete Elite Athlete, the lawsuit says. Both of them tested positive for trimetazidine, including an opened bottle that Cox had been using at the time of her test.

Monica Cooper said the company has failed to adequately address the issue.

“We informed them what was found and they said they were looking into it,” she said. “We received nothing in return. I don’t know if they were taking it seriously.”

After determining the vitamin had been contaminated, FINA reduced Cox’s suspension from two years to six months. She missed the U.S. Championships last July, which served as the qualifier for this summer’s world championships. Cox, who was reinstated in September 2018, has rebounded nicely, winning the 200-meter individual medley at a competition last week in Virginia with the nation’s top time for this year.

The Lubbock native had a decorated career for the Longhorns from 2013 to 2017, earning eight All-America honors and twice being named Big 12 swimmer of the year.