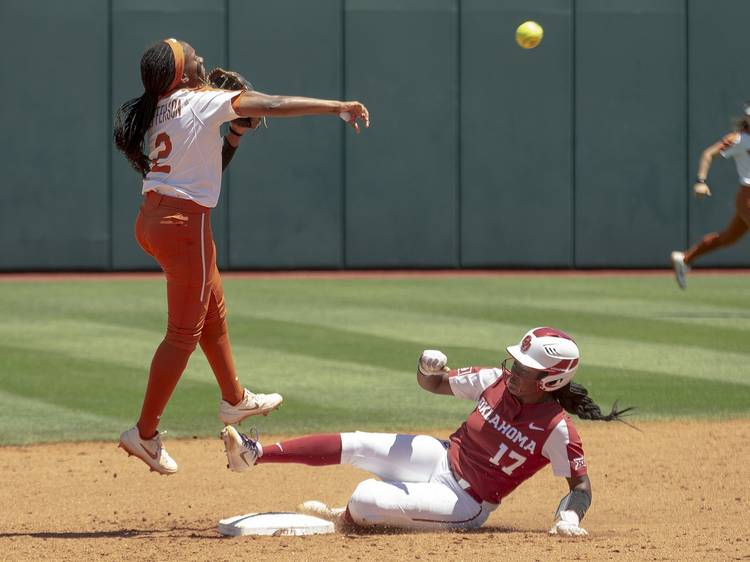 After surviving two close calls against Texas, Oklahoma left little doubt about who has the upper hand in the Red River Rivalry.

The top-ranked Sooners blasted two home runs and closed out a sweep of the 11th-ranked Longhorns with a 9-2 win at McCombs Field on Saturday afternoon.

After Saturday’s game, Texas coach Mike White told reporters the Longhorns need to “look at what (Oklahoma) did and try and get to that level.” The Sooners had five more hits and two fewer errors in the series.

“I always say that no loss is taken in vain,” White said. “I think there’s a lot to learn from playing this team. We need to play more teams like this to understand what it takes to be at that level. There’s a certain level you need to be at to be able to compete in the World Series, and you can’t do that without playing them.”

Ahead of its trip to Austin, Oklahoma was averaging an NCAA-high 1.93 homers per game. Its 77 total homers had been bested by only Arizona’s 81 and Virginia Tech’s 79. But over the first two go-rounds with the Longhorns, Oklahoma’s offense was held to hits inside the ballpark.

The Sooners, however, would not leave town without distributing some souvenirs to the fans who watched Saturday’s game from beyond the left field fence.

After Jocelyn Alo led off the second inning with a single, Grace Green hammered the first offering she saw from Miranda Elish. Three innings later, Alo made Elish pay for a two-out walk with her fifth career homer against the Longhorns. Texas is now 2-5 in games in which it has allowed multiple home runs.

“It pops the balloon a little bit,” White said. “You give up five runs on two hits. They only had 10 hits but scored nine runs — that’s pretty efficient.”

Oklahoma kept the Longhorns on the canvas with a four-run seventh inning. Two of those runs were charged to Elish, one of three pitchers used by Texas in the inning.

An All-American who transferred to Texas from Oregon this year, Elish was working for a third straight day. She pitched a complete game Thursday and was called out of the bullpen in the fifth inning of Friday’s game. UT was short a pitcher this weekend since freshman Shea O’Leary (12-1, 0.51 ERA) was nursing an ankle injury.

Texas is scheduled to host Prairie View A&M on Wednesday. The Longhorns will then head to Kansas next weekend for a three-game series.

“I think the hardest thing in softball is getting over (things), getting to the next pitch and getting rid of what happened in the past,” said junior Kaitlyn Washington, who drove in a run with a second-inning double. “I feel like this team is good about just forgetting things. We have a crawfish boil outside the fence today; we’ll go do that, kind of forget about this loss today and just come back to practice and get ready for the next series.”

Around the bases: Mary Iakopo was responsible for two of UT’s four hits, and either her or her pinch runner scored both of Texas’ runs. In the series, Iakopo went 8-for-10. … Oklahoma pitcher Shannon Saile struck out five batters during her complete game. … UT sophomore Ariana Adams allowed one hit over an inning of relief. … An announced crowd of 1,402 was the ninth-largest in school history. Friday’s crowd of 1,415 ranks seventh.