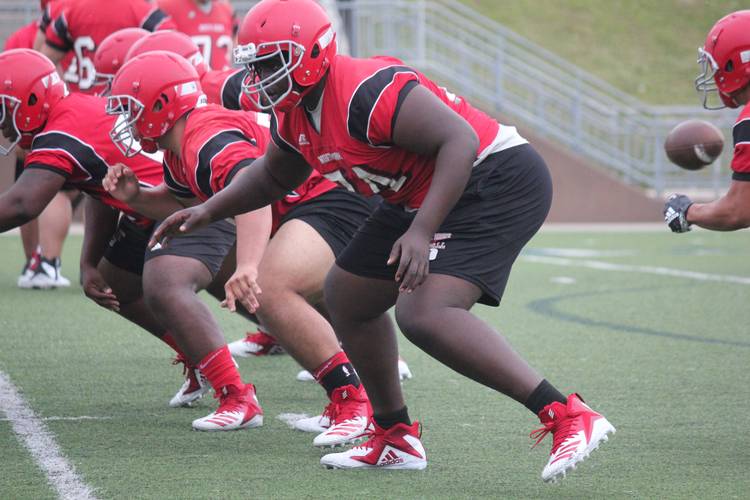 HOUSTON — Galena Park North Shore teammates Zachary Evans and Damieon George reaffirmed their intentions to commit to the same football program as spring practice began for the defending Class 6A Division I state champions. Evans and George starred for the Mustangs in a thrilling win over Duncanville, but the celebration is over and now it’s time for the Mustangs to forge a legacy.

“After we celebrated, we put it away,” said Evans, a five-star running back. “It’s time to start a new dynasty now and that comes from taking it one practice at a time.”

Evans’ cool, methodical approach to recruiting is a stark contrast to his sudden, physical running style. He’s still the same soft-spoken kid who started doing recruiting interviews as an emerging sophomore on varsity. He’s in no rush, displaying the same patience he uses at the running back position. He’s the top-rated player at his position in the country and the No. 2-ranked prospect in the entire 2020 class, per 247Sports’ composite rankings.

“It comes down to where we feel comfortable. Competition will be everywhere,” Evans said. “We can only pick one school. I’m taking it slowly and gathering information and communicating with the schools that reach out to me.”

The 5-11, 200-pound Evans is the top-ranked player on the 2020 Fabulous 55. He’s considered the best running back prospect from the state since Aledo’s Johnathan Gray. Evans holds 44 offers and plans on taking all five official visits, stating that Clemson and Alabama are two schools guaranteed to get an official. The Crimson Tide were at practice watching Evans and George on Wednesday.

Texas and Texas A&M are firmly in the mix. Evans said not to read too much into him not making it to Austin for spring practices. The accessibility of Texas may work in the Longhorns’ favor over time, but it is the reason Evans doesn’t deem it necessary to be a stalwart on any in-state campus.

“Texas is right there, so I can’t go to the in-state schools every week,” he said.

Evans’ goals as a senior are clear: Win another state title and cement his place in Galena Park North Shore folklore. A legacy is extremely important to him.

“I feel like I’m getting there, but I haven’t left my stamp yet to where people are like “oh, he’s that guy from Galena Park North Shore,” but my senior year can do that,” he said.

George is a massive right tackle who measures 6-7 and 340 pounds. Evans gets a ton of deserved publicity, but the first thing noticed at a North Shore practice is the sheer size of the offensive line. George is a first-off-the-bus prospect who admits to growing as a player and a person the last two seasons on varsity.

“I’ve improved my technique and my attitude towards things. I had to grow up,” George said. “It was something I had to do coming from a bad environment in order to do something better for myself and my family.”

George credits his environment with creating the chip on the shoulder that he and his teammates carry to the football field.

“Nothing was ever handed to us, so we all work for what we want. It’s a different type of passion,” George said. “We had to put in the work to get the offers, so we have to keep working or the offers can go away.”

“Coach Hand is a real cool guy,” George said. “He reminds me of some of my uncles. He’s funny.”

George, like Evans, said he is taking his time with the recruiting process and didn’t expect to come to a conclusion in the near future.

Tomorrow’s Dotted Line: It comes down to Texas or Oklahoma for Bryson Washington

The Dotted Line: A closer look at the 2020 recruiting classes for Texas, rest of Big 12