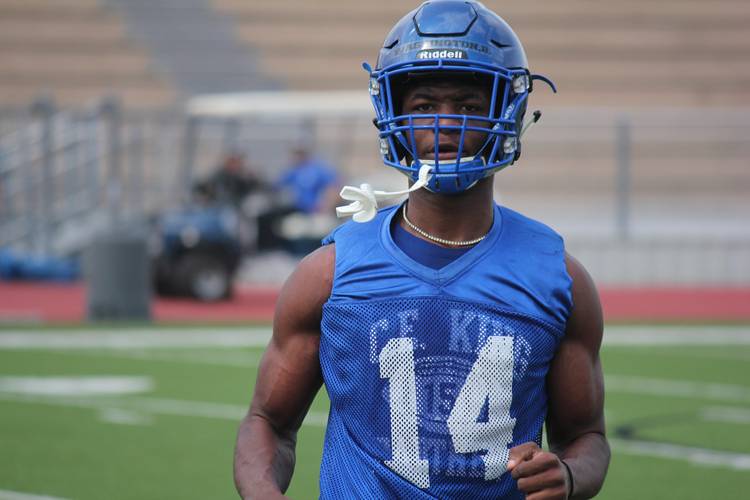 C.E. King safety Bryson Washington is a four-star and member of the 2020 Fabulous 55. (Mike Craven)

HOUSTON — Bryson Washington wasn’t keen on the move to safety the spring of his freshman season when head coach Derek Fitzhenry took over the job at C.E. King. Washington was a life-long offensive weapon who fancied himself a contender to win the starting job at quarterback entering his sophomore year.

Instead, that move to defense set in motion a chain of events that now leaves the four-star recruit with a decision between Texas and Oklahoma.

It’s not uncommon for rivals to duel it out on the recruiting trail. Whether it is Texas battling with Oklahoma or Texas A&M, the recruit views each as an opportunity to compete at the highest levels of college football. Washington whittled his list of offers that included Alabama and Clemson down to the Longhorns and Sooners. An official visit to Texas on June 4 is an important factor in his recruitment.

“I love both of those schools because they’re competitive schools with great fan bases,” Washington said. “Texas’ coaching staff is amazing and the city of Austin is beautiful. Oklahoma is a great place to live. It’s a quieter city.”

The 6-2, 196-pound prospect ranks No. 24 on the initial 2020 Fabulous 55. Fitzhenry remembers watching a young Washington blossom into a star at safety before district play even began that sophomore season. Washington’s long, athletic frame settled him in naturally at a position he’d never envisioned playing.

“Early in his sophomore season, he picks off footballs in the flats against two good teams and outruns high-end Class 6A talent with them having the angle,” Fitzhenry remembered. “That’s special.”

Washington remembers his coming out party as well. It was the second game of the 2017 season. He admittedly underwhelmed in his varsity debut against West Brook. He corrected that mistake in Week 2 against Willis.

“My coach challenged me after the first game and I killed it. I had a lot of tackles and an interception,” Washington said. “It opened my eyes to my potential.”

It’s that potential that caused college coaches to stop off at King to watch the young, upcoming prospect. King is just 12 miles from Galena Park North Shore, the reigning Class 6A Division I state champions and home to Texas targets five-star running back Zachary Evans and four-star offensive tackle Damieon George. The area is one of the most fertile football grounds in prep sports.

If recruiting is a test, Fitzhenry thinks Washington is passing.

“He’s done a great job with the recruiting process. He got a lot of attention early and we don’t always think about how much responsibility is as a kid,” said the head coach. “To get a call from Nick Saban before you can drive isn’t an easy thing to handle.”

Washington’s inner confidence is a trait Fitzhenry views as helpful under the spotlight.

“He sees himself as one of those high-profile guys and he’s taken on the responsibility to keep his head on straight and do what is best for his family,” Fitzhenry said.

For his part, Washington remains grounded knowing how fortunate he is to be in this position. Not just the safety position, but to be recruited by the best college programs in the country. Not bad for a quarterback with an admittedly sub-par throwing arm.

“It’s a crazy opportunity. Not every kid in the world gets that attention and I’m blessed. I’ve talked to the great coaches and learned something from each experience,” Washington said. “It’s really crazy to think back because I’ve only played safety since sophomore season. Now, I’m one of the best safety prospects in the nation and down to two schools that are rivals.”

Texas views Washington as a versatile safety capable of playing Joker and nickel like B.J. Foster or deep safety like Caden Sterns. Oklahoma floated the idea of Washington spending some time at cornerback because of his length and athleticism. He’s decided not to enroll early and use his spring of senior year focusing on improving his top-end speed on the King track team. Washington was limited this track season with a pulled hamstring.

“The most important thing isn’t getting there. All the hoopla is about getting there. The real goal is to get there and then become something special. Once you’re in college, everyone is, Bryson,” Fitzhenry explained. “I think he’s taken that to heart and put in the work. He’s ran track and is focused on getting his top-end speed fine tuned on the track as a senior. That way when he gets there he’ll be in the best shape of his life.”