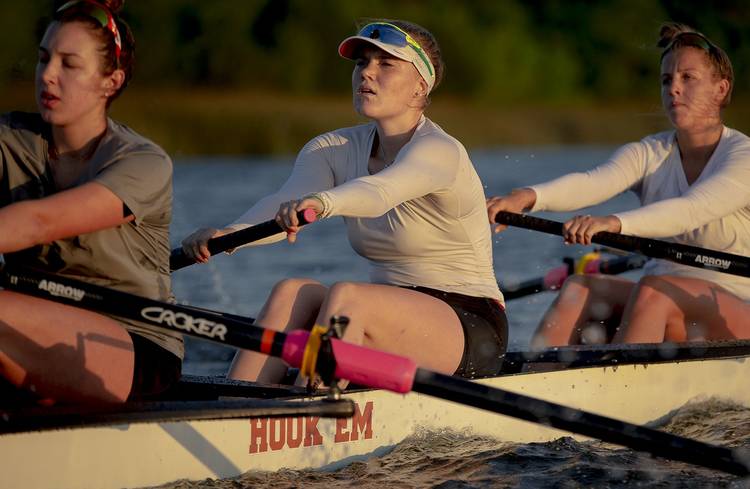 In her bedroom, Alexandra Watson has a trove of treasure that she’s earned as a member of Texas’ rowing team.

There she keeps the necklace that Texas adds pendants to whenever it wins a Big 12 championship. The junior also recently picked up an honor at the athletic department’s awards show. Then there are the two third-place trophies — one for her boat, one for her team — that Watson won at last May’s NCAA championships.

“To me it was a win, coming in third,” Watson said.

The sentiment is easy to understand. For one, the third-place finish for Texas was the best in program history. Second, the feat came just months after Watson nearly died from a bacterial infection.

Watson, who’s from Great Britain, developed a sore throat toward the end of a trip home in the summer of 2017. She thought little of it since “to be honest, I don’t get ill.” She flew back to Austin on the final Sunday of August, but her symptoms worsened. She then missed a rowing practice and couldn’t hold down any food. Then a roommate noticed that her face was showing signs of paralysis.

After a visit from UT trainers that Wednesday, Watson was taken by ambulance to a hospital. Two days later, she took a turn for the worse. Her heart rate spiked and doctors eventually needed to place her in an induced coma. Her parents were notified and told to get on a flight to Austin.

“They thought they were going to be bringing a body back,” said Watson, who also believed she was going to die.

Watson’s condition, however, eventually improved and she was brought out of her three-day coma. She doesn’t remember much about waking up, but she’s heard stories.

“This is going to sound really cheesy,” she said. “My dad went ‘Hook’Em’ and apparently I literally (faintly raised her Horns up). It sounds ridiculous and I thought he was lying, but the trainer was still there. She was like, yeah, you did that.”

During her ordeal, Watson went without eating or drinking for two weeks. Talking and walking became unexpected chores. She lost 25 pounds and most of her muscle mass.

Watson, though, still saw a return to rowing. She grew up a rugby player but was recruited to row in high school because of her 6-2 frame. A nutrition major, she wants to continue rowing in Great Britain after graduation.

“I’m not defying death for nothing,” Watson said. “It was inch-by-inch, every day I was like ‘you can do this today, you can do that today.’ I was determined to get back. Rowing is such a big part of my life.”

Her workload gradually increased and she got to row at Lady Bird Lake for 30 minutes that December. The next spring, she earned a spot in UT’s top eight-rower boat. One year later, Watson credits her teammates, coaches and trainers for their support and help. She also noted that a silver lining of her rehab was that “all the muscle grew back in the right places so I was really built for rowing by the end of the year.”

This Monday, Watson received the “Texas Tough” award at the Longhorn Honors event. Receiving the same award was Andrew Jones, the men’s basketball player who has fought a well-documented battle with leukemia.

“Racing NCAAs with her, I honestly cried,” teammate Fanny Bon said. “Still when I tell the story to anyone, I choke up because it was insane. She went from almost dying to making it to the podium of NCAAs within six months.”

Watson and her teammates are ranked fourth in the CRCA/USRowing Coaches poll. At Walter E. Long Lake this weekend, Texas’ Longhorn Invite is set to host a field that includes No. 10 Virginia, No. 11 USC and No. 20 Oklahoma. The Longhorns have already competed twice this spring and the Big 12 meet is next month.

But the Texas rowers have their eyes on a bigger prize. Watson would like to see UT improve on last year’s results at the NCAA meet. Ask Bon about the team’s plans and she’ll be a little more succinct.

“We want the world to know that Texas is a rowing school,” added senior coxswain Ashley Jacobs. “It’s not the historical teams that you see with Cal, Washington, Stanford, the East Coast schools, the Ivys. It is about time that Texas is no longer known for football, it’s known for rowing. This is the year to do it.”

A port side rower for UT, Watson sits in the third slot of her eight-rower boat. Texas coach Dave O’Neill says his team’s formula for success of “hard work plus good attitude equals success” is embodied by Watson. Following her illness, she discovered a sense of determination both in life and on the water. So don’t expect her to be intimidated when Texas lines up against the nation’s best rowers in Indianapolis next month.

“I’ve been through a lot worse,” she said.