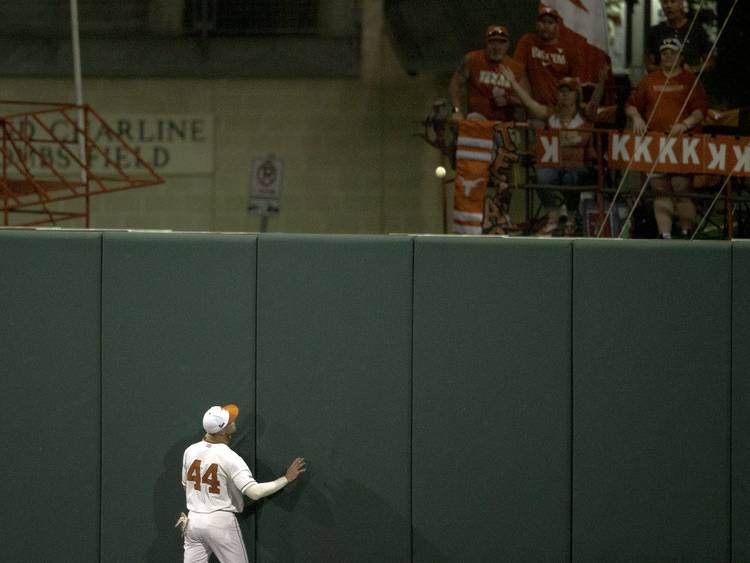 UT’s recent run of bad luck continued in a 3-2 loss to No. 17 West Virginia on Friday night.

The Big 12’s regular-season champion in 2018, Texas (24-20; 5-10 Big 12) was dropped into a last-place tie with Kansas in the conference standings. The Longhorns are mired in a five-game losing streak. This defeat, though, may have stung more than last week’s blowouts at Oklahoma State or the two walk-off losses that preceded it.

“That’s the way it’s been for a few weeks, but hopefully it will turn,” Elder said. “If we always have a chance like we did tonight, we’ll be just fine.”

Elder retired the first 17 Mountaineers he encountered on Friday and flirted with a no-hitter until there were two outs in the seventh session. Elder threw a season-high 122 pitches, only one of which he wanted back.

Facing pinch-hitter TJ Lake with a runner on first base and two outs in the eighth inning, Elder shook off a full-count call for a sinker. Elder instead elected for his slider, which Lake sent over the fence in right field.

“I’d throw it again if I had to do it again,” Elder said. “I just think I left it up over the plate and I think he was expecting it and so he made me pay.”

Ryan Reynolds tied the game with an eighth-inning RBI single, but Marques Inman’s solo blast off of Matteo Bocchi in the final frame was the decisive blow. Inman was responsible for two of the Mountaineers’ three hits.

Retired in order in the ninth inning, the Longhorns were left to think about what might have been in the second inning. With one out, UT first baseman Tate Shaw barely missed a home run to right field. The double off the wall should have been enough to score Zach Zubia from second base, though.

UT’s designated hitter, however, kept too close to second base while gauging if Shaw’s hit would be caught. Off to a late start, Zubia was sent home by UT coach David Pierce and easily thrown out.

“He needs to be far enough off that he’s going to score easy because he’s not tagging on that ball,” said Pierce, who replaced assistant Sean Allen in the third base box less than two weeks ago. “Once his position is where it was, I probably should have held him.”

Manoah was coming off back-to-back 15-strikeout shutouts, and he also didn’t allow a run over eight innings of work at Oklahoma State on April 5. His scoreless month was thwarted when Austin Todd singled home Kennedy in the third inning.

Manoah ended up striking out eight batters while allowing seven hits over seven innings. Elder registered a career-high 13 strikeouts in a start that lasted 7 2/3 innings. Manoah and Elder have won five of the Big 12’s 10 pitcher of the week awards this season.

Around the bases: Elder’s 13 strikeouts were the most for a Longhorn pitcher since Taylor Jungmann struck out 17 Iowa batters in 2010. … In his third four-hit game of the season, Kennedy singled three times and hit a double. He also scored both of Texas’ runs … West Virginia left fielder Paul McIntosh catch while crashing into the wall likely saved a run in the seventh inning. … Duke Ellis went 1-for-4 from the ninth slot in UT’s batting order. Over his first 42 starts this season, Ellis hit either first or second.