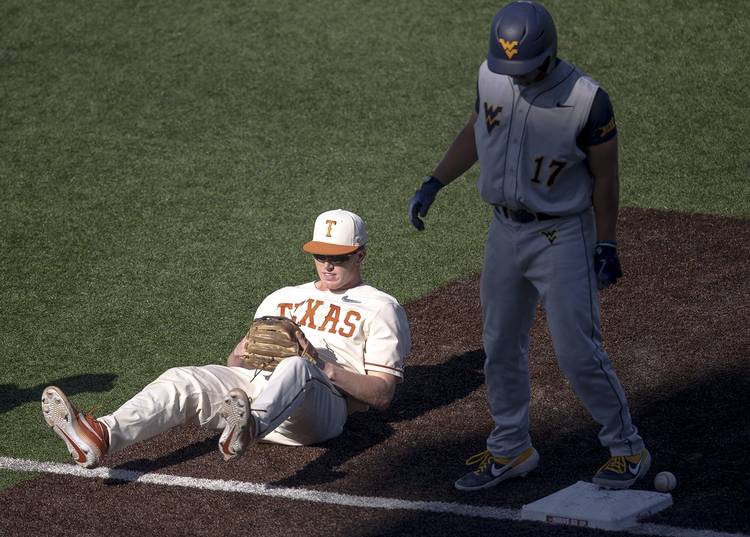 Texas' Ryan Reynolds sits on the field after dropping the ball while trying to tag out West Virginia's Phillip Dull on Saturday. [NICK WAGNER/AMERICAN-STATESMAN]

This story had been written before.

With two outs in the ninth inning Saturday, Duke Ellis stood at the plate with a chance to help Texas cap a comeback. Ellis, a junior outfielder, had been involved in five of the last six walk-off wins at UFCU Disch-Falk Field. Four weeks ago, his two-run double ended a 6-5 win over Xavier.

But with two runners in scoring position, Ellis instead flied out to left field. That play closed out a 9-8 loss to No. 17 West Virginia. The loss was Texas’ sixth in a row.

“It sucks. It’s obvious,” UT sophomore Zach Zubia said. “We feel like we’re going to turn the corner soon. Everyone can feel it. It’s there; it’s almost arriving.”

With last week’s 15-0 and 10-2 defeats at Oklahoma State, Texas (24-21, 5-11 Big 12) began its recent skid. The Longhorns, though, had a chance to win each of their last four games. Texas surrendered the winning run in the final inning of its last four losses and lost a ninth-inning lead in three of those contests.

Texas took an 8-7 lead into Saturday’s ninth inning, but West Virginia rallied with an RBI double and its second run-scoring bunt. The rally came at the expense of sophomore Kamron Fields, who was working his third inning of relief. Freshman right-hander Cole Quintanilla also factored in the ninth-inning collapse.

“It’s definitely not stuff. I think it’s just, again, maybe trying to be too perfect and have a little negative creep inside thinking that I can’t mess up as opposed to being the enforcer,” Texas coach David Pierce said when asked about his bullpen’s late struggles. “We know they’re good arms. We’re just going to have to continue to be good pitchers.”

UT still had a chance to rally in the bottom of the ninth. Austin Todd led off with a single and Sam Bertelson walked. After a fielder’s choice and a wild pitch, two runners stood in scoring position.

But West Virginia’s Sam Kessler struck out Tate Shaw, who had also recorded a walk-off double against Xavier last month. Ellis then unsuccessfully went after the first pitch of his at-bat.

On Saturday, Texas broke a tie with Kansas and took sole possession of last place in the Big 12 standings. The Longhorns will travel next week to play the Jayhawks, who were engaged in a nonconference series against Furman this weekend. UT must first try to avoid losing more ground to the Jayhawks during Sunday’s series finale against West Virginia (26-15, 10-7).

Said Zubia: “With our guys, it’s just going to be as simple as showing up tomorrow. The sun’s going to come up, understanding that, and just get ready to go tomorrow. Tomorrow’s a big one.”

Four Texas errors led to six unearned runs Saturday. Shortstop Masen Hibbeler and Zubia, who started at first base, made up for their three combined errors with home runs in the fifth inning. Ryan Reynolds also drove in three runs to lead the UT offense.

Around the bases: Pierce said freshman Ty Madden (3-1, 1.39 ERA) will start for Texas on Sunday. He will be opposed by West Virginia’s Kade Strowd (4-4, 4.13). … West Virginia senior catcher Ivan Gonzalez, a 2015 graduate of Stony Point High, had a two-run single Saturday. … After missing Texas’ last 13 games with a finger injury, freshman Caston Peter went 0-for-2 as the starting designated hitter. … Texas last lost six straight games during the 2016 season.