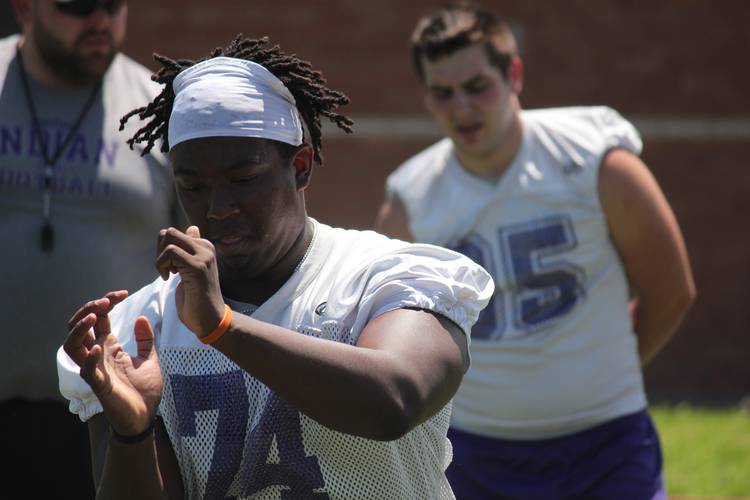 HOUSTON — Four-star offensive tackle Jaylen Garth entered Port Neches-Groves High School as a freshman who couldn’t do a single pushup or bench 95 pounds. Now, the 6-5, 280-pound Texas commit is going through spring practices as a junior and leader of his program. It’s been a long journey for Garth. One he still barely believes.

“I wouldn’t believe that I would be in this position,” Garth said. “The spring of my freshman year, the coaches really let me know about my potential and I took it to heart.”

Garth is the No. 32-ranked player on the 2020 Fabulous 55. He’s the 14th-best tackle in the nation and the second-highest rated commit in Texas’ class behind Hudson Card. Garth has spent the past two years blocking for Texas quarterback Roschon Johnson. The two are tight, and Johnson remains a brother to Garth.

“It was great having Roschon to look up to and help guide me through the process,” Garth said. “We talk all the time, and he tells me it is nothing but work once you’re in college.”

Port Neches-Groves head coach Brandon Faircloth also noticed the bond building between Johnson and his four-star tackle. Recruiting can be a lonely existence if the rest of your program isn’t filled with top-end recruits. The two shared those ups and downs as teammates in high school. They’ll soon be teammates again.

“Roschon was great for him. Recruiting is a wild world and Roschon was a great resource for Jaylen throughout the process,” Faircloth said. “They’re really close and Jaylen felt like Texas was the right fit for him.”

Faircloth is in a unique position as the head coach of Texas’ first real quarterback recruit under Tom Herman. The Texas staff has spent an immense amount of time at Port Neches Groves since Herman arrived on campus with the 2017 class, and Sam Ehlinger, already on board. The relationship between Herman and Faircloth extends back to Herman’s days as an assistant coach.

“Coach Herman is a guy who builds relationships. We go back a long time and I consider him a friend,” Faircloth said. “He’s personable and gets to know people, and he’s hired a staff who does the same thing. They do a great job of building relationships with these guys and selling the vision of what is coming to Austin. We saw that with the win over Georgia.”

Garth is one of three current commitments along the offensive line. He said that offensive line coach Herb Hand expects to move Garth inside to guard, but the big man has no preference, stating that he’ll play anywhere the Longhorns need him on the field.

“Coach Hand wants me at guard, but nothing is set in stone,” Garth said. “I need to work on my body, turning it into muscle. I can also improve on getting to the second level and my feet.”

The two tackle spots in the class are reserved for Chad Lindberg and Damieon George. Social media allows Garth to help recruit and build relationships with his fellow classmates despite his distance from Houston. With his own recruitment done, Garth’s focus shifts squarely to readying himself for his senior season and a career in Austin.

“I knew where I wanted to go, so I was tired of the process and ready to end it,” Garth said. “I felt like home in Austin because of my relationship with the coaching staff and the players.”