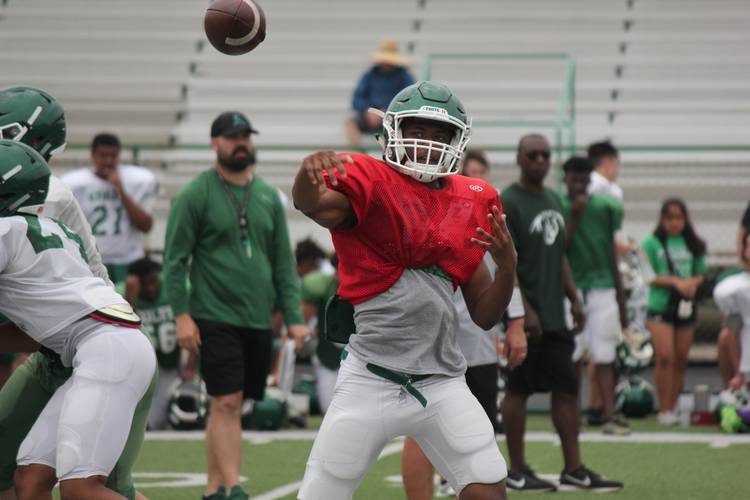 ARLINGTON — Four-star cornerback Jahari Rogers wasn’t a hot recruit heading into his junior season. It was the spring of his sophomore year when he moved from wide receiver to quarterback to cover for the expectant starter who was still playing baseball. Rogers secured the starting job in those six practices. A year later, Rogers now holds 25 offers and is considered the No. 16-ranked cornerback in the country.

Rogers understands his senior season is the last time he’ll play quarterback. He wants to make it count coming off a district MVP season that included 3,500 yards of total offense and 46 touchdowns. The 6-0, 170-pound prospect from Arlington High listed Florida, Texas, Notre Dame, Arkansas and LSU among his top schools after spring practice on Tuesday.

“Playing quarterback and wide receiver helps the transition to defense because you have that quarterback mindset,” Rogers said. “You have an understanding of what they’re trying to do. It’s an easy transition for me.”

Rogers backs up those words playing cornerback at elite camps on the national 7-on-7 circuit. He’s now back on the field with spring practice underway. He’s the clear leader of an Arlington team prepped for its best season in recent memory. Much of those expectations rest on the right arm and legs of Rogers.

“It’s exciting to get back on the football field. I’m a senior and a leader,” Rogers said. “The guys rally around me and I’m close to a lot of the guys off the field.”

Arlington head coach Scott Peach watched Rogers mature from a young athlete to college recruit and all-state candidate. Rogers broke his leg as a freshman. He returned in mid-March to run a 40-yard dash after months of rehab. Peach was worried about his team’s speed going into the 2017 season. That fear dissipated when Rogers timed faster than the rest of the upperclassmen.

“He was only 15 and hadn’t done anything but rehab on his leg and still outran our two fastest guys. I knew he was special,” Peach said.

Rogers isn’t an overly vocal leader. He demonstrates his status on the team with his play and unselfishness. This consists of rallying around the offensive linemen after a score or on the sideline after a bad drive. It also involves a post-game tradition that Peach never saw before Rogers.

Rogers plans to enroll early. That extra time is always an advantage for freshmen, but especially so for a player who must learn a new position. Rogers plans to take his official visits over the summer and make a decision when it feels right, though he did say it could come before the start of his senior season. That level-headed approach is something his head coach respects.

“I’m proud of how Jahari is handling the process,” Peach said. “A year ago, he had zero offers and no one talking to him. Then the circus came to town. It’s a whole new world for a 17-year-old kid. All of his friends want to know where he’s going. It’s hard. That’s a lot of pressure. He needs to do what is best for him and his family.”

Family is an important factor for Rogers.

One of those potential coaches is Texas assistant Jason Washington.

“He knows how to relate to younger guys and he’s energetic,” Rogers said. “I’m comfortable talking to him because he’s always there for you and it doesn’t have to be about football.”