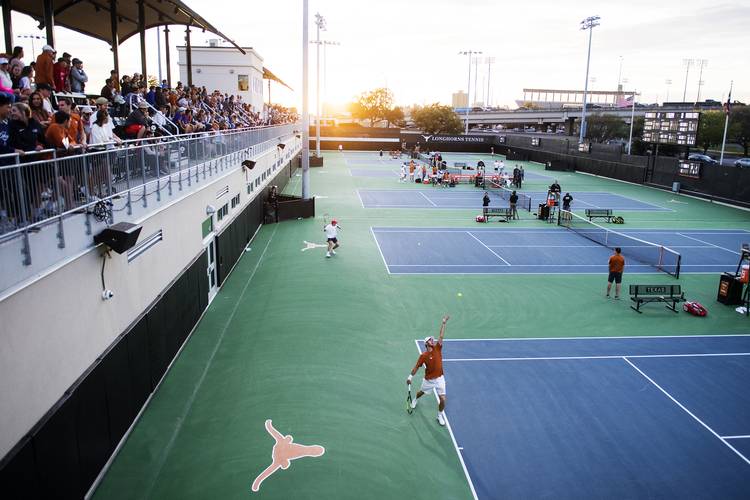 The Texas men's tennis team defeated then-No. 1 Ohio State, 4-1, just two days after coach Michael Center was arrested by the FBI for his role in the college admissions scandal. Photo by Texas athletics.

Logic suggests the Texas men’s tennis program should be decimated. But this program continues to smash every problem back across the net, pushing disaster back on its heels.

The Penick-Allison Tennis Center was torn down in 2014. The Longhorns were sent packing to the barren, wind-swept courts at the Whitaker Sports Complex far from campus. Texas continued to make the NCAA postseason.

“We didn’t have a lot out there,” junior Christian Sigsgaard said, “but we still just played tennis.”

After various delays, the school finally opened the $20-million Texas Tennis Center in January 2018. Things were looking up. Then came a real bombshell. Players learned early March 12 that head coach Michael Center had been arrested by the FBI. Center was fired the next day for his role in the college admissions scandal.

“It was surreal,” interim coach Bruce Berque said. “That’s the word I heard a few guys use.”

Somehow, in tennis parlance, advantage Texas. The day after Center was fired, Texas beat then-No. 1 Ohio State. A Big 12 regular-season title followed, and now the Horns are the No. 2 overall seed in the NCAA championships that begin Friday.

Texas (23-3) will face Tennessee Tech (10-13) in the first round at 1 p.m. Friday. Alabama (16-10) will play South Florida (17-7) in another first-round matchup. Should the Longhorns win both rounds this weekend, they should host a round-of-16 match next week in Austin.

The final eight teams in the field of 64 advance to the NCAA championships in Orlando, Fla. The Horns reached the national quarterfinals in 2014 and 2017.

Center’s arrest — and the resulting fallout from the scandal — simply floored everyone involved with Texas athletics. Athletic director Chris Del Conte got an early-morning call that Center was already in custody. He and other UT administrators were reading the FBI arrest affidavit the same time reporters did.

In a team meeting after Center’s arrest, the Horns had a long discussion about their future. “We can’t really think about anything that we don’t have any control over,” junior Yuya Ito said. “We just have to keep working as a team. That’s what we talked about.”

Court documents said that Center was caught on an FBI wiretap admitting to accepting $60,000 from Rick Singer, the California-based mastermind behind the entire admissions scheme. On April 24, Center pleaded guilty for accepting $100,000 to help a student get into UT under false pretenses.

The coach who led the tennis program for 18 complete seasons is now a felon. Center is scheduled to be sentenced in October. Prosecutors in Boston are recommending the lower end of the punishment range, which could be 15 to 20 months in prison.

“Michael Center is a very good man who made a criminally bad mistake,” his attorney Jack Cunha told reporters after Center’s guilty plea. “He’s very sorry for what he did, and at this point he wants to make amends.”

Back home, Del Conte turned things over to Berque, a member of Center’s staff since 2014. Berque’s no novice. He was the head coach at Michigan from 2004-14 after a successful stint as an assistant at Illinois.

Berque’s official title is interim head coach, and it’s unclear if Del Conte will remove that tag this offseason or hire someone else. Asked if he wants the job, Berque, who turned 53 earlier this week, said, “Of course.” On Wednesday, the interim coach was voted Big 12 coach of the year by his peers.

“I’d be thrilled to have the opportunity to have this job long-term,” Berque said. “But I’ve told the athletic director Chris Del Conte that I’m going to take care of the program as long as I’m entrusted to do that — whether that’s two months or 20 years.”

Berque’s already off to a good start. The win over Ohio State was a cathartic moment for a program that needed a pick-me-up. Less than two months later, a snapshot of that night’s victory adorns the coaching office.

On April 9, Texas made its first appearance in school history at No. 1 in the national ITA rankings. It’s a computerized system, but it closely resembles the Associated Press Top 25 poll in football.

The men’s and women’s teams were both honored Tuesday night for winning the Big 12 with the traditional lighting of the UT Tower.

Sigsgaard, Ito, Harrison Scott and Leonardo Telles are all nationally ranked among the top 100 by the ITA. Sigsgaard is seventh nationally. Ito is 12th. Sigsgaard and Scott rank fifth in the doubles rankings.

“For sure the program has been through some struggles, but everybody responded well to what happened, especially recently,” said Sigsgaard, the Big 12 co-player of the year. “I would say that’s just how the program is. We’re tough and no matter what happens, we’re going to stick together and just focus on playing tennis.”

‘We’ve got to come play and we’ve got to ball’: Texas heads to Kansas for crucial Big 12 series