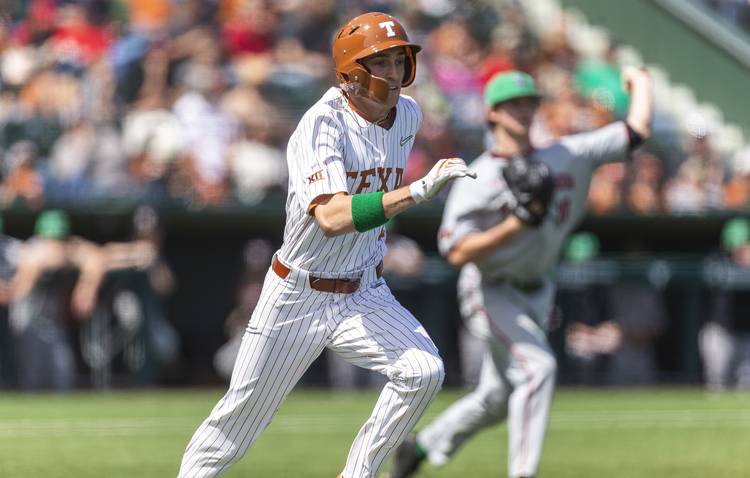 For Longhorns of all shapes and sizes, finding wins in Lawrence, Kan., has not been easy in recent years.

All-time, the Texas men’s basketball team is 1-17 there against Kansas. Two of the volleyball program’s three conference losses over the past three seasons came in the Jayhawks’ gym. Football? Let’s not go there.

This weekend, Texas baseball will be in Lawrence and the Jayhawks are pulling out all the stops — dogs at the park on Friday and a Star Wars-themed celebration on May the 4th — but the biggest spotlight will shine on the field. With the end of the regular season approaching, Texas (25-22, 6-11 Big 12) and Kansas (23-21, 5-10) are essentially tied for eighth place in the Big 12 standings. Eight of the Big 12’s nine teams that play baseball make the conference tournament.

“Our season’s not over. We’re not snake-bitten, we’re not anything like that,” Texas sophomore Zach Zubia said. “We’ve got to come play and we’ve got to ball. I think it starts on Friday. First inning, first pitch and we’ve got to be ready to go from there.”

Read more: Has Texas’ bubble burst for the NCAA’s tournament?

Texas holds a 52-25 lead in its series with Kansas. It did drop a 3-2 decision in last year’s conference tournament, and UT coach David Pierce said the Longhorns can’t afford to overlook the Jayhawks. Pierce was not pleased with how the Longhorns competed in an 8-2 loss at Texas A&M-Corpus Christi on Tuesday night.

“I thought we went out and saw that they had A&M-Corpus Christi on their jersey and we had Texas,” said Pierce, whose team lost for the ninth time in its last 12 games.

“We’re not very good right now. If you think we can just show up and win, that hasn’t worked out yet,” Pierce said. “When you look back at a LSU series (sweep in March) and just look at the intent and the intensity that we had throughout the entire weekend series, the minds were clear, the minds were in competition versus result. We have to get there with every opponent we play.”

Texas opened its conference schedule with two victories in a three-game series against Texas Tech. Since then, Texas has not won a single series and it was swept by Oklahoma State. The Longhorns split two games at Baylor last month before rain washed out a getaway game it was leading.

In seven of its 11 conference losses, Texas has surrendered the winning run in either the eighth or ninth inning. That happened twice last weekend in two losses to West Virginia. UT, though, closed that series with a 10-2 win at UFCU Disch-Falk Field.

“A pitch here, an at-bat here and we sweep that weekend,” Zubia said. “Looking back at it, there’s a lot of positives to take out of that weekend. I think we’ve just got to maintain our approach on the mound and in the box… Nothing changes this weekend.”

Texas does not have any games scheduled for next weekend. Pierce confirmed that depending on this weekend’s workload, both Elder and Henley could be available for Tuesday’s home game against Texas State.